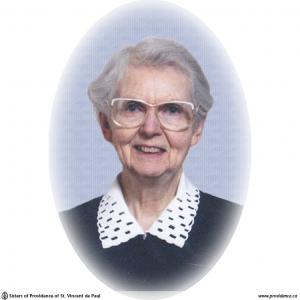 Alice Bernadette Gallagher was the third child born into a family of four girls and five boys. Her mother, Mary Alberta O’Toole, a Nova Scotian, met her future husband, Fergal Aloysius Gallagher, while teaching in Yorkton, Sask. It was on the Gallagher farm seven and a half miles north east of Yorkton that the family made their home. Alice and her siblings went to a one room school sometimes walking the two and half miles and sometimes driving a one-horse buggy. When they walked they stopped at their secret meeting places in a wooded area of their pasture. When they drove, they often sang songs most of the way, beginning with hymns, then patriotic songs, then folk tunes or rounds that they learned at school.

Alice went to Yorkton Collegiate for Grades XI and XII. She and some of her siblings took the first two years of high school by correspondence, with help from the teacher at the local country school and from their mother.

When her older sister, Marguerite, was accepted at Providence Hospital School of Nursing in Moose Jaw, she wanted to go too. But her mother thought Alice’s health was not good enough. She stayed at home helping with the house work and family for about a year, missing Marguerite very much. When the Department of Education announced a shortened course for training teachers during war time, she accepted her mother’s suggestion to take it.

During her year at Normal School in Regina she was extremely lonesome for her home. When she received her temporary teaching certificate, she was hired to teach in the school that she had attended. She was able to live at homes and walk or ride to school with her two brothers and little sister, to whom she became “Miss Gallagher” during school hours.

Before the school year ended the inspector offered her a school in the northern part of the province. She felt flattered and decided to accept the position in spite of her sister, Marguerite’s strong encouragement to join her as a novice of the Sisters of Providence in Kingston. She went to Inspector Martin’s home in Yorkton to tell him that she would accept the position. He wasn’t home. From there she went o the church. After an hour of praying before the Blessed Sacrament, she knew what she must do. She sent her application to Mother Anselm, the General Superior, for the novitiate of the Sisters of Providence.

One year later she was asked to go to St. Mary’s Hospital School of Nursing. At last her strong desire to be a nurse was becoming a reality. Her first assignment after graduation was to St. Vincent de Paul Hospital in Brockville as a night supervisor. A year later she was sent to Providence Hospital in Daysland as a staff nurse. Three years later she returned to St. Mary’s Hospital in Montreal where she was invited to join the teaching staff. In her spare time she attended classes at McGill University.

In March 1969 she was hired as a Research Scoiologist at the Developmental Centre for multiple handicapped children.

She was appointed Director of Nursing at St. Mary’s of the Lake Hospital in Kingston in August 1970.

Beginning in April 1977 she served two terms as General Superior.

In 1986 following a sabbatical year, Sister Muriel ministered and lived at Gabriel Home, a home for single mothers.

The next year she was appointed, along with Sister Sheila Brady, to what came to be called the Providence Health System. Sister Muriel was appointed president, a position she held until January 31, 1998. In this position she worked out of Edmonton, then Providence Hospital, Moose Jaw and finally the Motherhouse in Kingston.

In recognition of her leadership in developing the Providence Health System with its eight institutions in four provinces, the Catholic Health Association of Canada presented Sister Muriel with the 1993 Performance Citation Award.

In September 1997 she went to live in the Helen Street residence to help form an “intentional community”.

In 1999 she was assigned to write the History of the Sisters of Providence of St. Vincent de Paul.

Sister Muriel was called home to her loving God very early Saturday morning, June 8, 2013 with two Sisters at her bedside. The Mass of Christian Burial, held in the Chapel of Mary Mother of Compassion, Providence Motherhouse on June 18 was presided over by her brother, Rev. Jack Gallagher, C.S.B., assisted by members of the clergy. Rev. Leo Byrne was the homilist.