There is a new team in the office! Carol Groten, the Associate Administrative Assistant for twelve years, is the anchor. 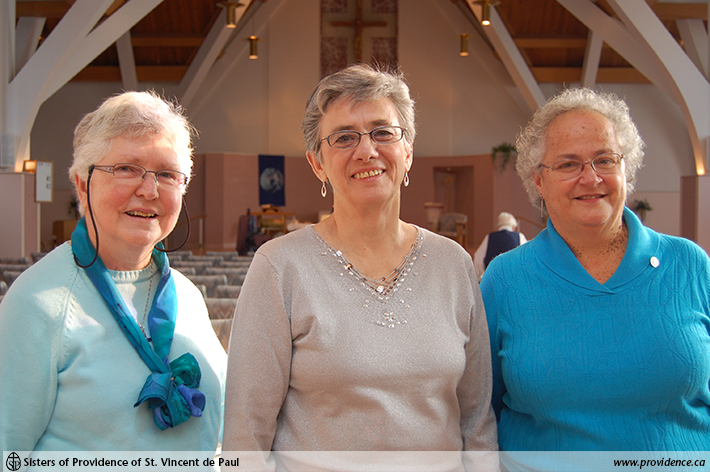 She knows what needs to be done and when, and she quietly goes about taking care of business. I don’t know how many others she has trained to coordinate efforts in the office but she never loses patience.

I arrived on the scene on a day in mid-November excited about the possibilities for the Providence Associates/Sisters Relationship.

We had said “Good-Bye” to Sister Catherine Cannon at the end of the fall AGEM and wished her well for the months ahead. When I came to the office I had no idea of all the daily details that would need attention. There were phone calls and emails to respond to, there was an end of month financial report to write, there was a Christmas letter and Christmas cards to send. We had to translate our Mission Statement into Spanish so Sister Gayle Desarmia, our Council Liaison, could take copies to the Providence Associates in Peru when she visited them in January. Then there was decorating the office and designing the Bulletin Board. During all of this time, we wondered if we were going to have a Sister Co-director joining us. Then in early December the call came from Sister Gayle saying that Sister Irene Wilson had said “yes” to the Leadership’s request. I am sure that there was much “pondering in her heart” as well as rescheduling her present ministries but on December 16th Sister Irene joined Carol and me in the office. We were so delighted to have her as part of our team. It has been a steep learning curve for both Irene and me. Carol never gets frustrated with our questions and wonderings but patiently walks us through all the new learnings.

Irene and I met recently and have drafted a two year Initial and Ongoing Formation Plan that we are excited about. We will continue to develop it with the guidance of the PAC members and hope to have it ready for the fall of 2012.

We had another request from the Leadership Team that came to us from Sister Gayle. The Sisters at the Motherhouse have been running a Tuck Shop for many years. The Sisters, staff and friends donate items for sale and make them available to people on retreat, other staff as well as others who may be visiting. The proceeds from the Tuck Shop go to the St. Vincent de Paul Society to support their ministry to people in need. Sisters were asking if there might be any Providence Associates interested in taking over the responsibility of operating the Tuck Shop. Sister Gayle suggested the names of a few people that had come up for the council and when I phoned Marie McCartney she was willing to try. She wondered if anyone else in her local group would be willing to work with her. When she asked Sheila LaRush we had two very capable and generous women who very much wanted to help. They soon met with Sister Anne Hudec who was pleased with their enthusiasm. If anyone has any small items to donate I am sure these women would be pleased to receive them so they can continue to support the work of the St. Vincent de Paul Society.

We have had a request from Sisters in other departments in the Motherhouse for help. If any of the Providence Associates are willing to help out for short periods of time we would be willing to put you in touch with people who are in need of help. 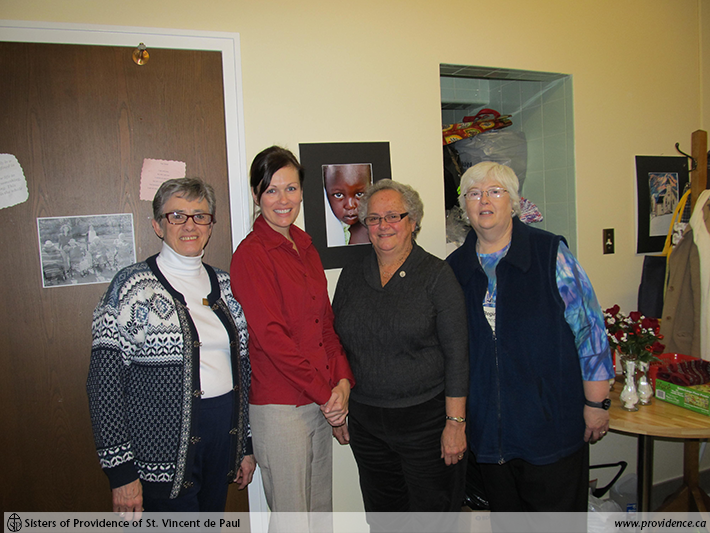 Nancy Stevens, Activities Director at Providence Motherhouse was a guest at the Rainbow Associates January meeting. Nancy’s enthusiasm and passion for her work in Kenya is very evident as she shares stories about ‘her children’. She is a strong believer and advocate for self-sustainability for the orphanages and schools. Nancy was recently awarded the 2011 Peace Medal from the Kingston YMCA for her KENYA HELP PROJECT.

We were grateful for Nancy’s visit and presented her with a donation toward her upcoming trip to Kenya in March.

We have also heard that the Marillac Mission Fund that supports the work of the Sisters of Providence in Peru could use any financial support that our local Providence Associates could raise. The sisters are doing wonderful work with the poor people of that country and would like to expand their ministries if the funds were available.

There are a couple of up-coming events that you might want to mark on your calendars.