We began with a social on Friday afternoon that allowed time for people to catch up with each other and to hear about the work that Providence is doing through us.

The work began Friday evening with our business meeting where we heard that Sue MacDonald and Christine DiZazzo had completed their three year term on the Providence Associate Committee and where Regina Giebles and Marie McCartney were acclaimed to PAC for the next three years.

We also had a process for discussing a proposal put forth by Christine DiZazzo that the Associate membership fee be increased to $50.00 for those who could afford it. The process ended with a vote by the Associates present that the fees be increased on the condition that the majority of the Providence Associates in the west would agree as well.

Before Friday evening was over we watched a PowerPoint presentation that gave us an overview of the two-year Formation Process: Renewal and Celebration through the lens of Trust in Providence, Compassion, Service, Forgiveness and Prayer. Each of the “lead” presenters will be an associate who will be supported and enriched by the input of a Sister and any others they may choose to help them.

During the Opening Prayer Yeshi Redda became a candidate.

Saturday was a day of silence devoted to Ignatian Contemplation. Sister Irene Wilson led us in three sessions based on the scripture stories of The Storm at Sea, the Bent Woman and The Washing of the Feet. It was a profound time for both Associates and Sisters. The faith sharing after each meditation moved us into a deeper relationship with Jesus and each other.

Six Providence Associates attended the Fall Gathering of the Sisters of Providence during the first week of October. We were so pleased to be able to join with the Sisters and learn more about Nonviolent Communications from Sister Judi Moran a Sister of St. Ann from Victoria, BC. Sister Judi told us how important it is to listen deeply to each other and to be able to express our feelings and our needs so we can keep the lines of communication open and honest. 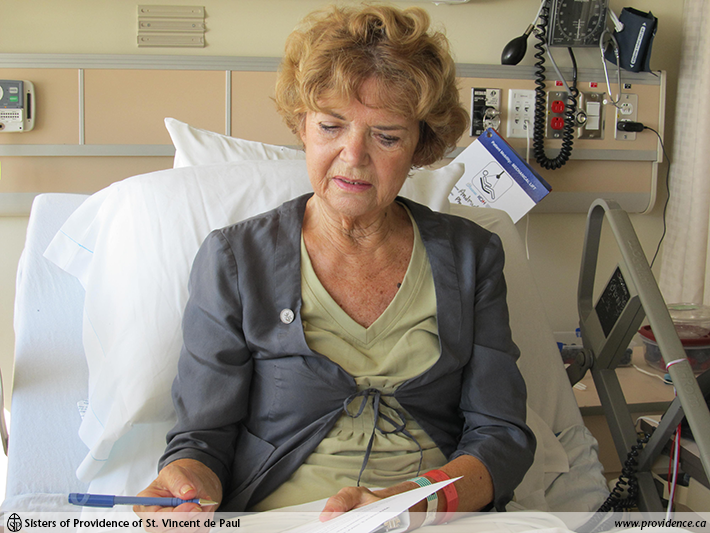 Jane Hayes makes her commitment as a Providence Associate during a celebration in hospital.

Jane Hayes and Joan Murray were delighted to hear that the Leadership Team had approved them to make their commitments as Providence Associates at our fall AGEM. Because Jane became ill and was in the hospital it was decided that five of us, Sisters Sandra Shannon, Irene Wilson and Frances O’Brien and Associates Barbara Baker and Carol Groten would go to the hospital with a liturgy designed for her. On September 12th on a bright sunny day, with her sister Maggie and her son Andrew present, we sang her favorite songs and prayed together. Jane signed her document and received her pin. She was so grateful that she could become a Providence Associate in the light of the fact that she had been told that there was no cure for her cancer. 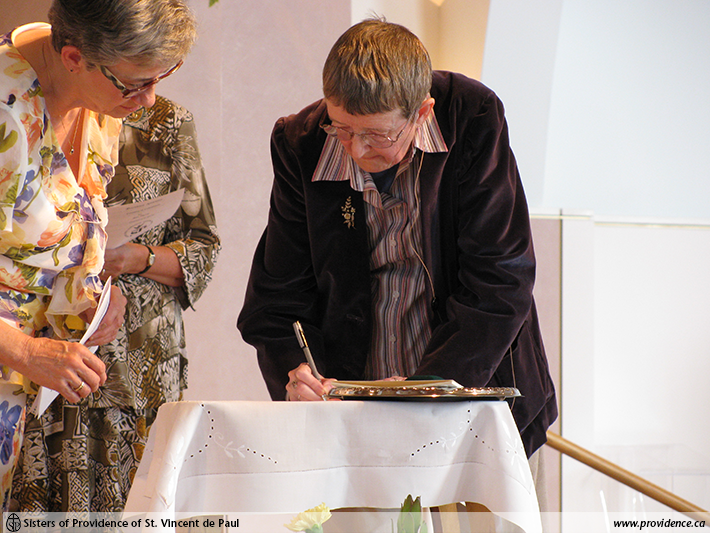 Joan Murray, right, makes her commitment as a Providence Associate surrounded by family and friends.

At the AGEM Evening Prayer on Saturday, September 22nd, Joan Murray, with her husband and children present, made her commitment in the Mary, Mother of Compassion Chapel. Joan was the cantor for her ceremony and received her pin from Barbara Baker and the Spiritual Heritage book from Sister Gayle Desarmia. It was a lovely ceremony.

After the Evening Prayer in the chapel we all went to the Sisters’ dining room to celebrate the 25th anniversary of the first 14 people who made their commitment as Providence Associates in 1985. Five of those women were present, Barbara Fleet, Ann Ford, Sandra Campeau, Shirley Kindellan and Colleen Evans. The women were each presented with a yellow rose by the General Superior, Sister Sandra Shannon. A delightful time was had by all!

In June of this year seven women left from Heathfield, in two cars, to drive to St. Mary of the Woods, Indiana for the Providence Event. They were Sisters Frances O’Brien, Gayle Desarmia, Sandra Shannon, Una Byrne, Irene Wilson and Providence Associates Carol Groten and Barbara Baker. Sisters Lucy Bethel and Alda Brady drove in their car while Providence Associate Christine DiZazzo and Sisters Pauline Lally and Susan Pye flew. We traveled in anticipation of hearing Ron Rolheiser, the keynote speaker. The topic of the event was Mysticism and Providence where we heard Ron talk about Providence as the finger of God touching the ordinary events of our lives. Divine Providence is the conspiracy of accidents through which God speaks, Ron told us. The table conversations with other women from Providence Congregations were inspiring as we considered how we will live out the charism of Providence in our daily lives. The event was very provocative and the women came home with a new sense of what it means to be Providence People.