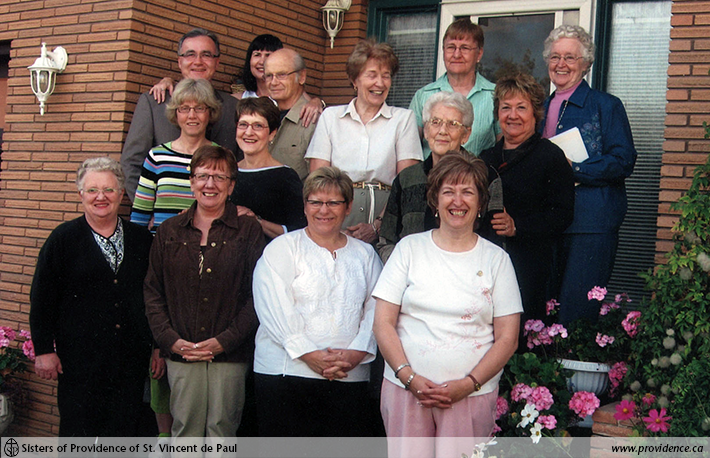 In 1996, at the invitation of Sr. Judith Ann Murphy, we received the first group of seven inquirers. Miriam and Norm Hanoski, Doug and Mary Tien, Debbie Muise, Hildegard Schafter and Anne Roper began deepening their Spiritual Journey with God.

After an intense formation of over three years including studying about our Spiritual Founders, our Provident God, Blessed Virgin Mary, St. Vincent, St. Louise, Blessed Emilie, Mother Edward, (Catherine McKinley) and other pioneer Sisters, a commitment was publicly made and each associate was engaged in a local ministry with the poor, sick, elderly and dying in our community.

A second group began in 2000 with Jan Kehoe, Dr. Suna Smith, Rita Gould, Pat Niehaus and Cathy Liebel. A third group began in 2003 including Connie Prost, Audrey Heck, Bernice MacFarlane and Aaron and Lillian Hamilton. The Hamilton’s are currently on a two year assignment, but they remain candidates. Connie, Bernice and Audrey made their Commitment in 2006.

In 2003, Dr. Smith, Miriam Hanoski and Sr. Bernadine Bokenfohr traveled to El Progreso, the Sister’s Mission in Peru. They took with them the $10,000 raised at a fund raising drive for the mission. The poverty they witnessed prompted them to continue their fund raising projects. In conjunction with the Catholic Women’s League, the Catholic School Children and St. Mary’s Staff and Auxiliary, a further $15,000 was raised over the next three years through bake sales and financial contributions.

The funds were used to build an addition to the school, a proper bathroom and notebooks for the Peruvian children. Almost 19 hundred pupils benefitted from this project. In addition, the Mental Health Clinic was given samples of medications that Dr. Suna received from pharmaceutical companies. The mental health clinic is run by a physician, two psychologists and Sr. Rose Marie Bokenfohr, based on the therapeutic community model of Dr. Maxwell Jones.

We now have 11 Associates, 3 prayers and 2 candidates. Doug Tien joined the Deaconate Program and will be ordained as a Deacon on July 2, 2008. His wife is committed to assisting and supporting him. Doug states that the Associate Program led him to a desire to deepen his spiritual life as a Deacon.

The Associates have committed themselves as a group to pray the Church’s Prayer The Companion to the Breviary. The Spirit is alive among the Associates at St. Mary’s Hospital. We walk in hope and we journey in solidarity with the poor.