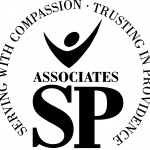 As part of the two-year formation process, Associate program co-directors Barbara Baker and Sister Irene Wilson have been traveling to the Associates across Canada.

In late October they visited Camrose and led a process of Ignatian contemplation. An outcome of the visit was an agreement that, rather than starting from scratch, the Camrose group would use the same materials as were being used in Ontario for reflection, discussion and prayer. Pardon the bad pun, but there was lots of “associated” socializing and catching up as well.

In February, Toronto was the destination. Again, Ignatian contemplation and prayer were used with in the Toronto Associates gathering – and the group reflected on their prayer and the St. Vincent de Paul day. Kingston, Belleville and Brockville are next in line.