Providence Associates began a two-year formation process in September with the theme of renewal and celebration.

The process uses the method of Ignatian contemplation, praying to know Jesus better in order to love him more and follow him more closely. We are moving through four topics, exploring each as it is reflected in the lives of key people in the history of our congregation: St. Vincent de Paul, St. Louise de Marillac, Emilie Gamelin and Catherine McKinley.

The five topics are: 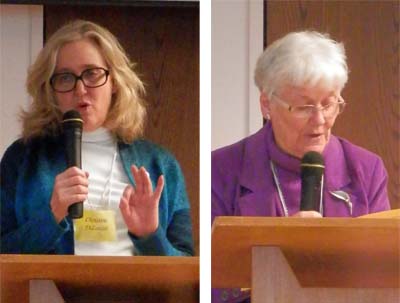 In January, a large number of Associates and Sisters assembled in the Providence Spirituality Centre for a day on St. Vincent. Christine DiZazzo contextualized the life of Vincent de Paul in light of the religious faith of the day and its concern for heresy, wars, and disparities between the rich and the poor. 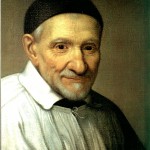 His life, from 1576 – 1660, was influenced not only by his family, intelligence, education and early adventures, but also by his religious contemporaries and powerful friends.

Against this background, and out of a deep prayer life, Vincent discerned God was calling him – to teach, serve the poor and sick, be a parish priest, organize the Ladies of Charity and the Daughters of Charity to assist him and to establish the Vincentians, the Congregation of the Missions.

The next speaker, Sister Susan Pye, told us of Vincent’s spirituality in relation to his simplicity and humility and his ministry of “evangelizer of the poor.” His deep trust in Providence, a hallmark of the congregations he founded, was connected to his deep desire to do God’s will – and was expressed by an indifference to material things and appreciation for the maternal/ feminine face of God. St. Vincent’s Christ was one who served the poor and suffering; hence he devoted himself to finding Jesus suffering, and to minister to him there. Influenced by his spiritual mentors, he fostered contemplation in action, faith sharing and good liturgy.

After a time of small group sharing which focused on the application of the charism, mission and spirituality of Vincent in our lives today, Christine and Sisters Judy Lee and Susan led us in an inspirational prayer service. It was the perfect follow-up to the Rainbow Group of Associates’ wonderful opening prayer.