Renewal and Celebration Series: Founders of the Kingston Congregation

The Associates formation program continued in March with a day focused on the Kingston founders of the Congregation.

These founders and the issues of the day were dramatized for the gathering. Kingston Bishop Horan was performed by Sr. Catherine Cannon, in cassock and mitre. Providence Associate Sheila Burchart, dressed in a habit and modified veil, presented the life of Catherine McKinley (known as Mother Mary Edward), the first postulant in the sole religious congregation founded in Kingston. 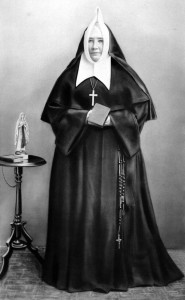 What came to light was that the bishop and the Sisters disagreed on three hot topics in the early years of the new community:

1. The Sisters’ first teaching mission in Belleville. There were hard feelings both in their coming to teach and in their leaving so soon. 2. The different stand taken by Bishop Horan and by Mother M. Edward and Mother Mary Mt. Carmel over the acceptance and appointment of Sister Rosalie, a Montreal Sister. Strong feelings were expressed on both sides; only with the passage of time and new information were the waters calmed and peace restored. 3. The question of elections vs appointments. Mother Mary Edward felt that all offices should be by election, not just the office of the Superior General. Bishop Horan thought that he should appoint Sisters to the other offices. By 1872, Bishop Horan presided over the elections of the positions of Superior General, General Assistant, Treasurer and Mistress of Novices.

Times for quiet reflection and small group sharing provided an opportunity to realize how different things are today and how far we have come in our development as a congregation.

Catherine, born in Kingston, the youngest child of a ship owner, had two older brothers with whom she played. She was 10 years old when her mother died. Her father remarried so she could have some “womanly guidance and training” to balance her “natural impetuosity, quick temper and spirit of self-sufficiency.”

In 1862, at the age of 25, Catherine entered the new religious congregation, believing that she was being called by God to respond to the needs of the time – caring for orphans and the poor, visiting and looking after the sick in their homes, instructing the women in the penitentiaries and engaging in begging campaigns to finance their work.

Four years after entering the newly established congregation, Catherine – now Sister Mary Edward – was appointed the first Superior by Bishop E. J. Horan. She continued to hold leadership roles for over 40 years. During this time, she did a lot of building because she believed that both structures and people were important in a new community. Besides begging tours, which took the Sisters to districts outside of Kingston on both sides of Lake Ontario and as far south as Holyoke, Massachusetts, she wrote letters to political leaders soliciting aid for all those in her care.

She was equally solicitous about her little community, supporting any undertaking in the interest of education that would enable the Sisters to care for the poor. She also often challenged the conditions under which her community lived and worked.

In 1873, the Holyoke mission was established with Sister Mary Edward as local superior. She and three other Sisters used their home as a hospital, orphanage and home for the elderly, as well as their convent. Over a period of 19 years, the mission grew from four Sisters to over 40 Sisters and novices.

In 1890, the Bishop of Springfield sent a petition to Rome asking for a separation from the Motherhouse in Kingston. Mother Mary Edward was once again congregational superior and helped the congregation weather the division caused by this forced separation: The split not only took away sources of novices and finances but more than 30 Sisters remained in Holyoke, diminishing the Kingston congregation.

In 1902, Mother Mary Edward went to the new St. Peter’s Convent in Trenton, where she continued to write letters, raise funds, visit the sick and care for her beloved congregation. She died peacefully in Trenton in 1904. “A valiant woman” – a courageous and warm leader.

Bishop E.J. Horan was born in Quebec in 1817 to an English-speaking family and was educated in French. Being completely bilingual, he was able to be an instructor in English when he entered the Petit Seminaire at age 13. His main interest was in the sciences, especially scientific agriculture. After his ordination, he became professor, director and assistant procurator of the Quebec seminary, and first secretary of Laval University. In 1848, he left to do advanced studies in Natural History at Harvard and Yale. When he returned to Quebec, he became the first principal of Laval Normal School.

On January 8, 1858, he was chosen the fourth bishop of Kingston, Ontario, consecrated in St. Patrick’s Church, Quebec in May and arrived in Kingston in June. His background was one of intellectual pursuits. His world was the university; his friends were from the higher echelons of society.

The diocese of Kingston had substantial problems – a massive debt, a financially troubled Catholic school system, the plight of the poor, elderly, sick and prisoners. He could deal with the first two problems because of his previous ministry but he had no experience caring for the needy. When he appealed for assistance to the daughters of Mother D’Youville in Quebec (The Sisters of Charity/Grey Nuns of Montreal), his request was rejected as full of risk. He then turned to Bishop Bourget and the Sisters of Providence of Montreal. Mother Philomine agreed to set up a new Congregation with a unity of rules (establishing a similar charism and spirituality). The Montreal Sisters stayed in Kingston for five years. Bishop Horan advanced the situation of the separate school system to a large degree. He was a close friend of Sir John A. MacDonald; many political favours were extended in both directions.

Bishop Horan died on February 15, 1875, after a year of deteriorating health.