A career dedicated to nursing 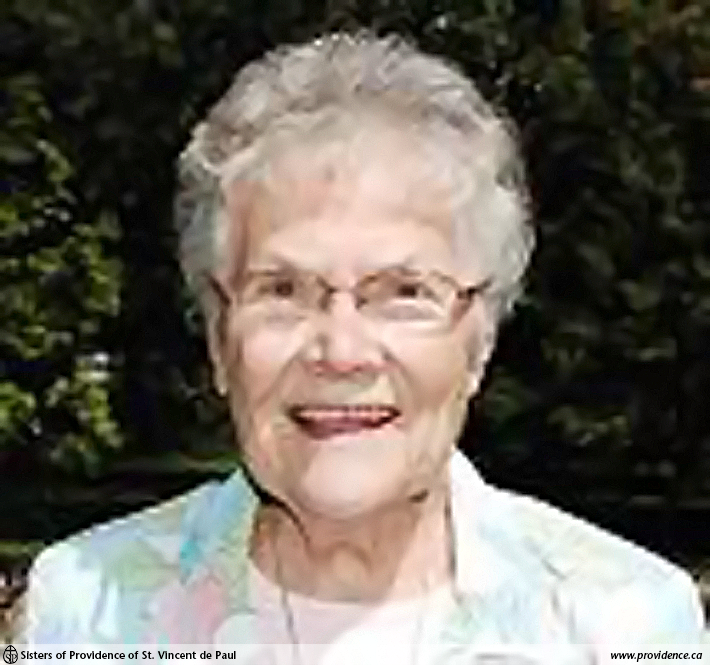 With her trademark wit and humour intact, Sister of Providence Elaine Jacob has returned to Kingston, ON from Edmonton, AB to live among her community. During a visit to the Communications office, the octegenarian chuckles, lifting her pant leg to reveal mismatched socks. The faux pas comes as no surprise to her friends — she’s always in a rush due to her tardiness!

Sister Elaine puts her sense of humour aside long enough to get serious about her long and life-giving ministry work. She was recently named an Honourary Lifetime Board Member of an organization for her work to enhance the lives of people suffering from eating disorders. The Society for Assisted Cooperative Recovery from Eating Disorders, SACRED, is a nonprofit, charitable organization based in Edmonton. Medical Director Dr. Joan Johnston writes, “Sr. Elaine’s vast experience in the health care field and her tenacious methods in approaching politicians, funding bodies and government agencies have been a major influence allowing SACRED to open a full-scale treatment centre for people with eating disorders.”

Her work with SACRED seemed a natural progression after retiring from a 50 year nursing career where those same elements — hope and healing, defined her work.

Born in Hungary in 1927, the eldest of four moved to Canada when she was just five. After working as a secretary for five years in Montreal, she met Sister of Providence Sr. Cabrini (Annie Josephine Cusack) who

worked in the sacristy at St. Patrick Church. This relationship introduced Elaine to the Kingston-based congregation.

“Not just any congregation. I felt called to the Sisters of Providence of St. Vincent de Paul,” recalls Sr. Elaine.

After graduating from the School of Nursing at St. Mary’s, Montreal in 1953, Sr. Elaine worked as the Director of Nursing Services at St. Mary’s from 1957 until 1972. During these years, she furthered her education by receiving the following degrees; Bachelor of Science/Nursing from Ottawa University, Master of Science in Nursing Administration from the Catholic University of America in Washington D.C.

at both Queen’s University and St. Lawrence College. She then enjoyed a one year sabbatical to study at the School of Applied Theology in Berkeley, California. During the 80’s, Sister was a surveyor for the Canadian Council on Health Service Accreditation, and a member of the Canadian College of Health Service Executives.

Sister headed to Western Canada during the ‘90’s and worked for five years as an Associate Executive Director and hospital Mission Co-ordinator of St. Mary’s Hospital, Camrose. She also served on the Board of Directors at both St. Mary’s, Camrose and St. Joseph Auxiliary Hospital, Edmonton for over a decade. Still full of energy and enthusiasm, she dedicated her spare time to pastoral care with the Hungarian church, in addition to what she terms “shopping mall” and “apartment building” ministry where she’d listen and pray for mall employees and apartment dwellers.

Asked about her return to Kingston, Sr. Elaine said “I chose to come home. At my age, it was time.”

She wrote the following reflection for her 60th Jubilee in 2007.

“These 60 years have been grace-filled. God has engraved on my heart and soul a passion and dedication for ministry in health care and has continued to bless me with enthusiasm for all the work God has invited me to do. I thank God and all my Sisters for the rich feast I found in my vocation.”