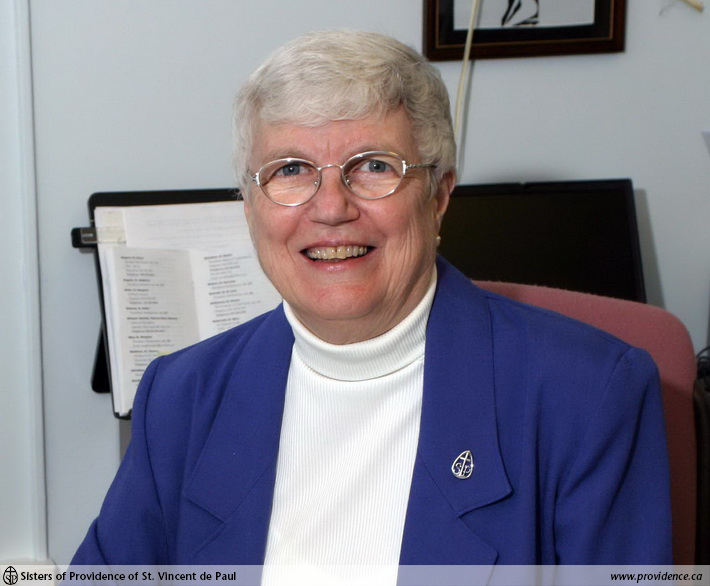 Sister of Providence Pauline Lally’s connection to the Queen of England dates back many years. As a teenager in Belleville, she took time off school to head down to the Belleville train station where she met a young Princess Elizabeth and her new husband Prince Phillip.

This summer, Sr. Pauline was nominated to receive the Queen’s Diamond Jubilee medal honouring community leaders. The Award marks the 60th anniversary of Queen Elizabeth’s accession to the throne.

One of 30 recipients of this prestigious honour, Sr. Pauline was humble in her acceptance and acknowledged all of Kingston’s religious communities for ministering throughout the 60 year reign of her Majesty the Queen. Award recipients were chosen from every walk of life; their deeds reflected their passion for improving conditions, making visible the neglected, and attending to their neighbours.

“When anyone is awarded with such attention you can be sure that there is so much moral and spiritual support behind her,” said Sr. Pauline. “Women like us don’t do our ministries on our own, in a vacuum. There is a great network of people both in our congregations and associated with us.”

Leaders in social justice, the Sisters of Providence continue their high profile Silent Vigils every Friday at Kingston City Hall to bring attention to the needs of the marginalized.

“We live in a world broken by unshared bread and rising inequality, where the climate crisis threatens all Creation. Last year, some 26 communities of faith in Canada, insisted that climate change represents a moral crisis,” remarked Sr. Pauline.