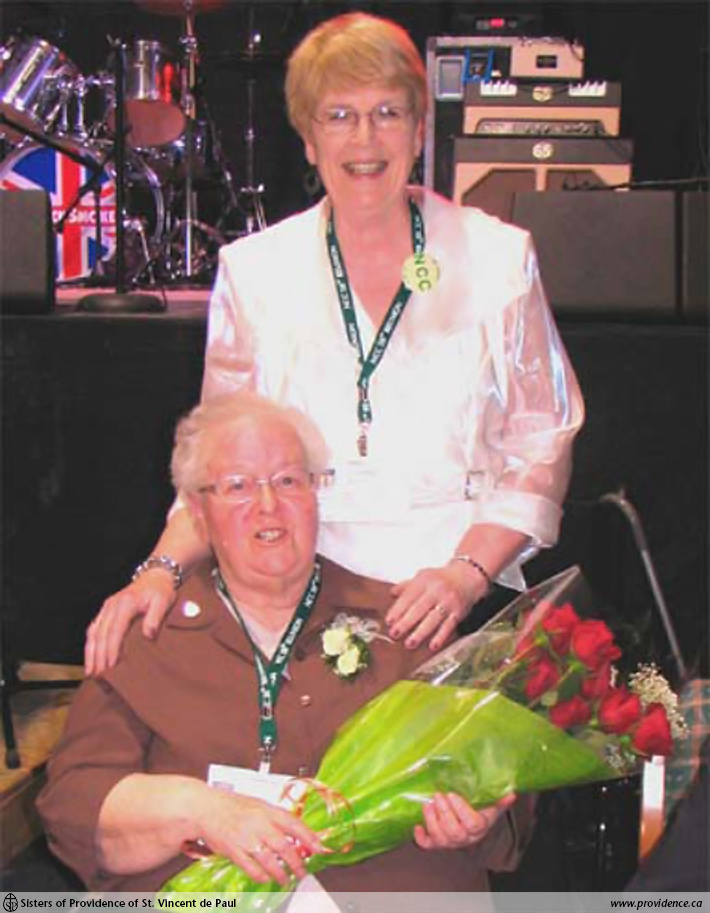 Sister of Providence Mary Joan LaFleur admits it was both a privilege and honour when asked to be the guest speaker at the 50th anniversary reunion at Nicholson Catholic College in Belleville on May 15, 2010. Sister Mary Joan served as Principal from September 1978 to June 1993. An excerpt from her speech appears here.

Let us raise up in thought and prayer the members of the St. Michael’s-Nicholson Family who have gone to God – pastors, parents, teachers and students, friends and supporters of our schools and ministry. May they rest in peace.

According to Mr. Edward Buckley, an early student of St. Michael High School and life-long supporter of Catholic education until his death, always, maintained that the effect of Catholic secondary education training was significant. That many graduates from St. Michael’s High School and later Nicholson Catholic College were well trained and accepted into the professional world and carried their Catholic principles into their homes, into their businesses and professional fields and into their every day lives.

In 1930 the students were taught in several rooms behind the stage in the auditorium of St. Michael’s Academy. When a new convent was built to house the Sisters, who were teaching in Belleville, the convent on John Street became the new Catholic secondary school and was given the name St. Michael’s High School so called because it was established by the then only Catholic parish in Belleville at that time.

Let us take a moment to reflect on the name. Michael. As the scripture story tells us Michael was the defender of good against evil, caught up yet undefeated in the battle between the darkness and the light. Each of us still experiences that battle daily as we find ourselves caught in the struggle between darkness and light. We must always Trust in Providence. God will provide the light and strength each of us needs to remain faithful. To this day the motto of Nicholson Catholic College is that of St. Michael – “Quis ut Dues.”

When St. Michael’s High School on John Street could no longer accommodate all of its students, a new school was needed. In 1959 the Catholics of Belleville launched “a blitz” campaign for building funds. The nucleus for the fund was a generous bequest from Monsignor Nicholson. The response from the parishioners was just as generous and Nicholson Catholic College was built.

The new school was given a new name, that of Nicholson to honour the man who launched the dream. Monsignor Nicholson was much loved by his people.

As the student population grew so did the operating costs for Nicholson Catholic College. There were no more Sisters of Providence to fill the need for more teachers.

It was necessary for the Board of Directors to hire lay teachers. We were fortunate to have dedicated Catholic men and women join the ranks of the teaching staff and to minister with the Sisters and clergy of the archdiocese. Be assured that the Sisters, in their prayers, remember you, your ministry and your students and their parents.

As a proud Kingstonian and Catholic educator, I would like to take the liberty to name some Kingstonians who made significant contributions to Catholic Education in Belleville.

Catholic Education in Belleville has a long tradition not only with the Loretto Sisters from Toronto but most especially with the Sisters of the House of Providence, or Sisters of Charity from Kingston, now known as the Sisters of Providence of St. Vincent de Paul. In 1865 a small group of Sisters from the newly formed Kingston congregation, under the leadership of Sister Mary Edward, Catherine McKinley – a Kingstonian whom Rome considers our foundress, came to Belleville to teach. The bishop recalled them a year later. We returned in the early 1900’s.

As we go our separate ways let us remember words from our school song “Shoulder to Shoulder” which encourages us to be faithful to our Alma Mater as we march down the years.