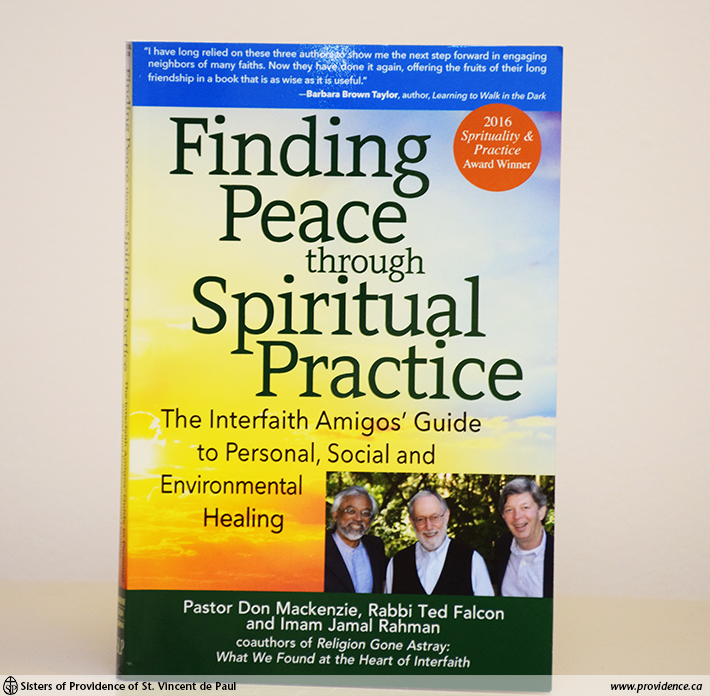 One common trait among spiritual directors is their ability to listen deeply – one might say, beyond words. This special gift allows them to have truly authentic conversations with those they are supporting because they know inherently that we are all connected and that spirit is moving in all of our lives.

Whether we are rooted in the Catholic, Buddhist, Jewish or Islamic faith, we have an opportunity to learn from one another and to work together to heal our personal and planetary problems. This is the message that both Sisters Jeannette Filthaut and Diane Brennen took home after attending this year’s Spiritual Directors International Conference in April.

The event, which was themed “Seeking Connection,” returned to Toronto for the first time since 2003. The main highlight for the two Sisters was the conference’s plenary presenters – the Interfaith Amigos – who brought a unique blend of spiritual wisdom and humor to the audience to help promote effective collaboration on the critical issues facing our time.

Pastor Don Mackenzie, Rabbi Ted Falcon and Imam Jamal Rahman started working together after 9/11 when they saw that there was a dire need for creating more positive interfaith dialogue to help combat the demonization of entire religions based on the radical acts of only a few. After a short time working together, the Amigos soon recognized that the spiritual resources within each of their traditions had elements that were being used to support exclusivity, which too often lead to violence in the name of religion. They then got to work on developing tools to build supportive interfaith dialogue and are traveling the world promoting understanding, compassion and friendship.

“In our violent world where people are so disrespectful of different faith groups and races, it was empowering to see the relationships between these three men,” explained Sister Jeannette. “The dialogue between them was at such a deep level that it made you think about what was possible in the world.”

The Interfaith Amigos have made it their mission to help impart the core teachings of each of their religions to others around the world. They also stress the need to be open to interfaith dialogue and the wisdom of other traditions. They explain that interfaith is not about conversion but about completion – that by being open to other traditions, you can actually deepen your roots within your own traditions. They compare interfaith dialogue to looking at an object from different angles so that you can get a clearer view.

“Because of the keynote speakers, it really felt like a retreat rather than a conference. I found it extremely nourishing spiritually,” said Sister Diane. “We really are all the same and we all want the same things out of life no matter what path or religious tradition we follow. As spiritual directors, we are trying to guide others from different religions and there are means of doing that without referring to our own belief systems.”

Both Sister Jeannette and Diane were so enriched by the Interfaith Amigos workshops that they took home copies of the book, Finding Peace through Spiritual Practice: The Interfaith Amigos’ Guide to Personal, Social and Environmental Healing. The Sisters both say they are enjoying the book and that it is teaching them how to connect with the three religions by continuing their own individual spiritual practices. They feel the conference was a great experience for both of them and that, what they learned at the event, will definitely help them in their roles as spiritual directors.