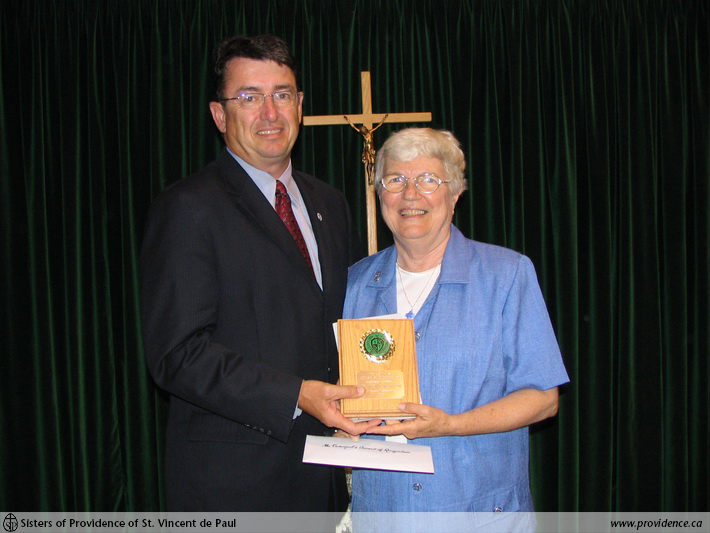 Our school community has benefited tremendously over the years due to the spirit of volunteerism, responsiveness and care of a great many people. Tonight we continue the tradition of recognizing those who have taken such an interest in Holy Cross. The Principal’s Award of Recognition looks to high light the contributions of an individual to the Holy Cross community.

Many in attendance this evening have benefited tremendously from the Catholic Education that they have received in this province. The older high school graduates like myself in this room were taught by sisters and priests who were the foundation of our present Catholic School system. I, like many others in the room, benefited from the example, commitment, sacrifice and leadership of the religious sisters and priests.

This year Sister Marian McCallum, the last teaching Sister of Providence in the Algonquin and Lakeshore Catholic District School Board, retired on January 31 after more than 30 years of teaching. Sister McCallum made her Final Vows as a Sister of Providence of St. Vincent de Paul in 1971 and began her teaching career. In 1998 she came to Holy Cross.

Tonight we honour Sister McCallum as the recipient of the Principal’s Award of Recognition. In doing so, we honour all religious and in particular the Sisters of Providence who have devoted their lives to serving our Catholic elementary schools in Kingston and at Nicholson Catholic College in Belleville. Sister Marian as the last teaching sister of this order in our system will forever be remembered for her love of singing, her love of languages and her love of seeing students involved community service.

Sister Marian is gravely ill and cannot be in attendance with us this evening. I ask that you continue to keep her in your prayers. Accepting the award of Sister’s behalf is a former teacher of mine, at St. Patrick’s Elementary School in Kingston where she delighted all of the students with her enthusiasm, smile and interest in our activities. I would ask that Sister Pauline Lally come forward to accept the Holy Cross Principal’s Award of Recognition on behalf of Sister Marian McCallum.