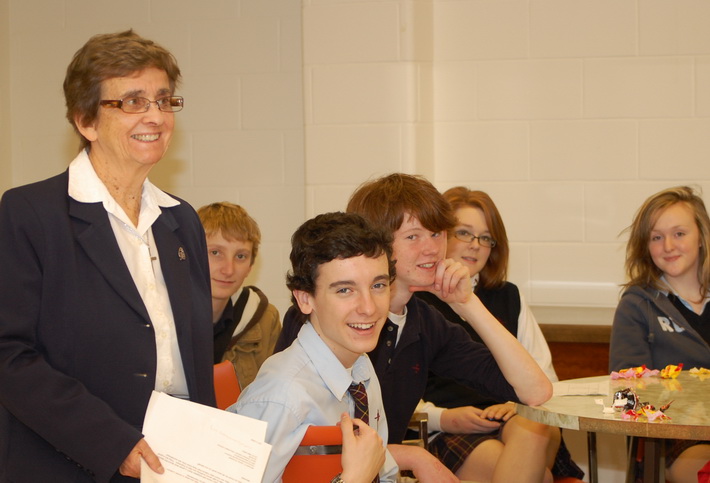 Sister Barbara Thiffault spoke about each person’s call from God and shared aspects of her life.

The Vocation Team, now the Vocation/ Formation Team, continues its work of Vocation Ministry. The members of the Team are Sister Barbara Thiffault (Contact) , Sister Lucy Kearney, Sister Rita Gleason and Sister Nancy Wilson who has recently joined the Team. Sisters Dianne McNamara and Monica Whalen are the Council Liaisons.

Our Vocation Team has produced a new vocation brochure which is being distributed throughout the Archdiocese of Kingston and beyond and is posted on our web site.

Sisters Barbara Thiffault and Lucy Kearney hosted a ‘Come and See’ day last spring for a young woman from Toronto who is in the process of discerning her vocation. 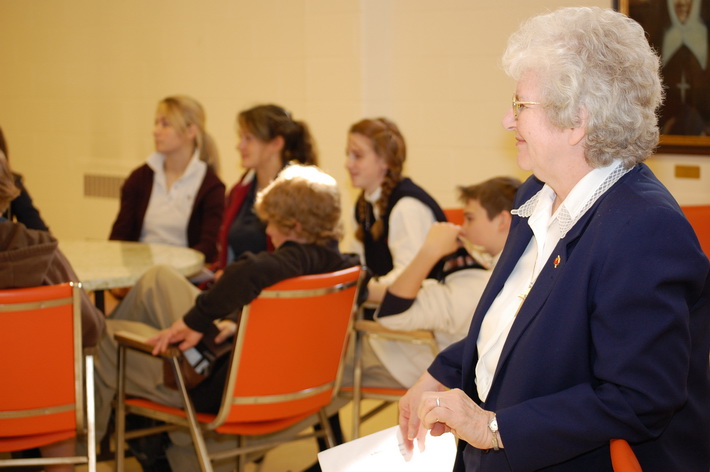 Sister Lucy Kearney shared with the students her call and ministry. 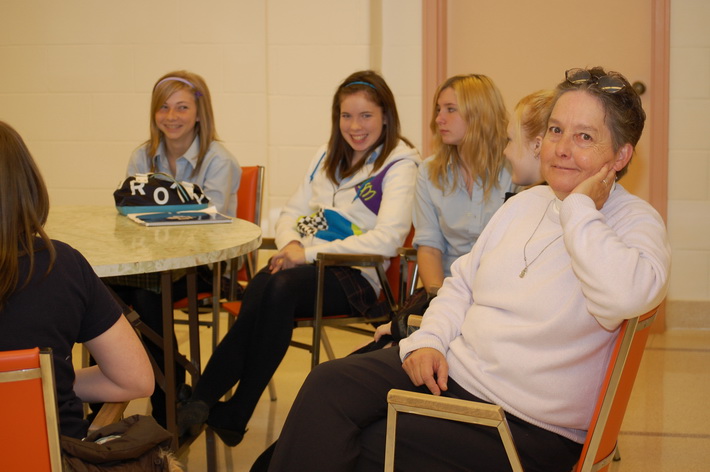 Sister Alda Brady shared the story of her call to religious life and ministries.

Our Vocation Team initiated the formation of an Inter-Congregational Vocation Committee with representatives from all the Religious Congregations in Kingston. The first meeting was held in March 2007.

Since then, we have met about 4 times a year. We came together because of our common interest in the future of religious life and our desire and willingness to be part of the archdiocesan vocation initiatives. Our meetings have been held at the Motherhouse beginning with supper and followed by the meeting in the Vincentian Room. Our main activity was the study and discussion of interesting and challenging articles on religious life.

We agreed that we needed to inform Archbishop Brendan O’Brien that we had formed this committee and that we were interested in offering our support to the archdiocesan vocation work. It was decided that Sisters Barbara Thiffault and Lucy Kearney would contact the Archbishop to brief him on our committee. We had a profitable meeting with him on May 22, 2008. He suggested that we host a second meeting to include Father Rod McNeil, Vocation Director for the Archdiocese. This meeting was on June 11th at which time Archbishop O’Brien and Father Rod McNeil agreed to meet with the Inter-Congregational Vocation Committee. That joint meeting took place on September 9th at the Motherhouse. Also present at the meeting were two recently recruited laymen, John Quinn and Bronek Korczynski to work with Father McNeil on the Priest Vocation Team.

John Quinn is a retired secondary school teacher from Belleville and Bronek Korczynski is a Religious Education Consultant for the Algonquin and Lakeshore Catholic District School Board.

One of the outcomes of our first meeting was that the two groups, including the Archbishop, would meet on January 15, 2009 to continue our dialogue and to plan a couple of projects.

The Inter-Congregational Vocation Committee will be meeting with Sister Helen Russell, csj of Peterborough and Sister Monica Whalen in April 24, 2009 to explore the possibility of setting up a Round Table on Vocation Culture.

On December 5th, fifty enthusiastic Grade 10 students from St. Theresa Catholic Secondary School in Belleville visited the Motherhouse as part of a school assignment. Sisters Alda Brady, Lucy Kearney and Barbara Thiffault conducted tours of the chapel and of various areas of the Motherhouse enabling them to see some of the ministries carried out here. Sister Kay Morrell made a presentation on her Art Therapy classes. Cate Henderson hosted the students at the Heritage Seed Sanctuary and explained the process of seed saving. The students showed great interest in the Heritage Room as they viewed the displays. At the end of the tours we gathered with the students in Catherine McKinley Hall to give them an opportunity to ask questions. They had many excellent questions about our lives as Religious.

Vocation Sunday is the 4th Sunday of Easter

Let us hear your suggestions/comments for instilling in our people the gift of living out one’s Baptismal call as a priest or a consecrated religious in today’s church and culture.

Please continue to pray for those discerning a call to the priesthood and religious life and for the work of these committees.