Sister Rita Gleason’s only worry was giving up music 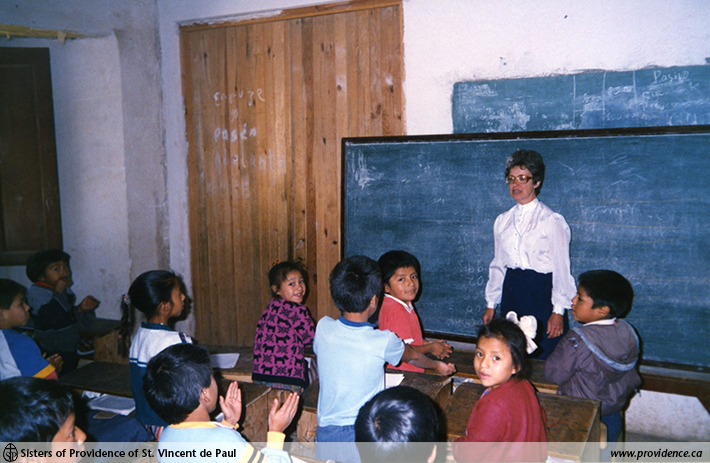 Sister Rita Gleason knew that she was called by God. She had no doubt that religious life was for her. But she had one hesitation. To enter a congregation would surely mean giving up her beloved piano. She knew sacrifice was involved and that would be hers.

So imagine her delight when, only two weeks after she entered the initial postulancy (candidate) stage, the Sisters of Providence approached her and asked if she wanted to continue with her music. Her answer was a resounding “yes” that has defined her life. Fifty-six years later, she’s still playing, still teaching and still using her music to commune with her Lord.

Sister Rita was 17 and playing out of the Grade 9 repertory book of Canada’s Royal Conservatory of Music. That is considered an advanced level – the music she played during her recreation times on Thursday and Sunday was complex and interesting. The problem was, to move forward with music, she first had to move back a few steps. Just like any subject in school, music levels require completing exams, and she hadn’t taken any. “I was uptight over exams,” she says, so had just moved forward without them. Because she hadn’t prepared for exams, she hadn’t had rigorous training in piano technique – all those scales and chords and arpeggios. She didn’t know her music theory too well either. She was taken in hand by Sister Mary Jane. When Sister was finished with Rita, she got Kingston’s best mark on her Grade 8 piano exam. Sister had to “unteach” her, Sister Rita says now, with a rueful look. She was so strict that Sister Rita cried after lessons. Just the same, it was worth it. “I am so grateful to the Congregation that they gave me my music.”

After the triumph of her Grade 8 exam, Sister Rita, who had taken the religious name of Sister Maureen, was sent to Brantford, where a Mrs. Virginia Blaha taught her the nuts and bolts she needed. Many in Sister Rita’s family are musical but they rely on a good ear and can learn music by hearing it. She had to learn to read it well, write it and understand it.

By her early 20s, she was a full member of the Congregation and ready to get her piano teaching certificate. She was again in Kingston and had begun to teach music herself, as she prepared. “I took to teaching,” she says. That was a welcome surprise. The reason she chose the Sisters of Providence in the first place was that the Sisters took on many roles, not just as teachers, which she didn’t think she’d enjoy. She had expected to be an office worker. But, of course, that was before music was offered.

Providence Manor was her favourite spot to teach and she built up to about 50 students. That was a great number, but a real pain when Vatican II came along and restrictions on Sisters’ dress were relaxed. She chuckles: It wasn’t as if she walked into a classroom and all the students saw at once that she was in a shortened habit and that her hair showed. Instead, she experienced each students’ surprise, one by one. She also had to tell each student that she had reverted back to her original given name and have them absorb that. By the end of the week, she was bracing herself every time a student arrived!

The community of Sisters at Providence Manor was a help because they could laugh. They gave each other home perms. Together they got used to the new clothes and the new names. And they enjoyed each other’s stories – of veils that wouldn’t stay on and got lost in the soup, and so on.
By the 1970s, she was on the move, spending a few years at a time at the convents in Tweed, Belleville and Arnprior, Ontario, teaching music. In Tweed she was in charge of music at the parish as well.

From 1985-87, she became the congregation’s vocation director and that was the first time that music didn’t play a part of her working life. She expected things would be the same when she accepted a posting to the Sisters’ mission in Guatemala. Surely she wouldn’t be involved in music? Wrong she was. Not only did she play music, she taught as well – in Spanish. This time, she taught not only the organ but the guitar, which she had picked up on her own. 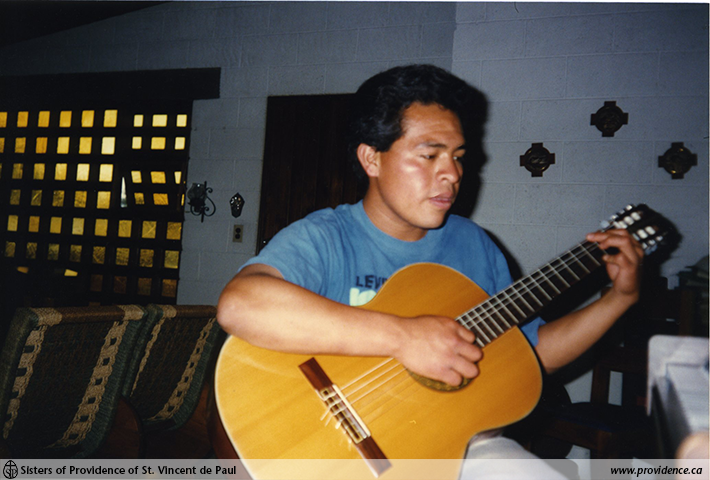 Another unexpected turn in Guatemala was that other musicians sought her out – she became a destination, someone worth travelling to. Groups of young men from the towns – the pueblos – would walk for miles to learn from her – how to tune their guitars properly and about the timing of the music they played in their chapels. One fellow brought an accordion and Sister Rita learned that too, so she could help him. One of the visiting priests showed her how to use the buttons so she transferred the knowledge that she had just picked up herself. “They came because of their faith,” she reflects, and together they would play and sing the hymns they wanted to know.
She was in Guatemala for five years, teaching music in school for grades 1-6. “The kids loved the music,” she says. “They gave me big hugs.”

Returning to Canada was a culture shock. It helped that she spent two years completing a Master of Arts in Ministry and Spirituality at Regis College of the University of Toronto. That moved her into parish work. She was north of Edmonton, now, in the suburb of Fort Saskatchewan, and she was frustrated. The role was limiting. She was told to “be a presence,” but not given a real place in the parish. She looked for something else, and it found her. She took on a job as chaplain at the University of Alberta Hospital.

“I felt at home right off the bat,” she says. Again, she expected that music wouldn’t be part of her working life. But when she went to work at St. Joseph’s Auxiliary in Edmonton, a hospital the Sisters of Providence had founded, that changed. The CEO wanted to start a staff choir. Who better to lead it? Sister Rita says that not only was it good for staff morale – everyone enjoyed choir practice – it was useful. The choir sang at memorial services for patients and there were at least four a year.
Sister Rita retired from the hospital in 2009. She goes back to St. Joe’s every month to play at Mass and at a happy hour. She works on it. “I still like to learn new music, to figure it out, to go to workshops.” 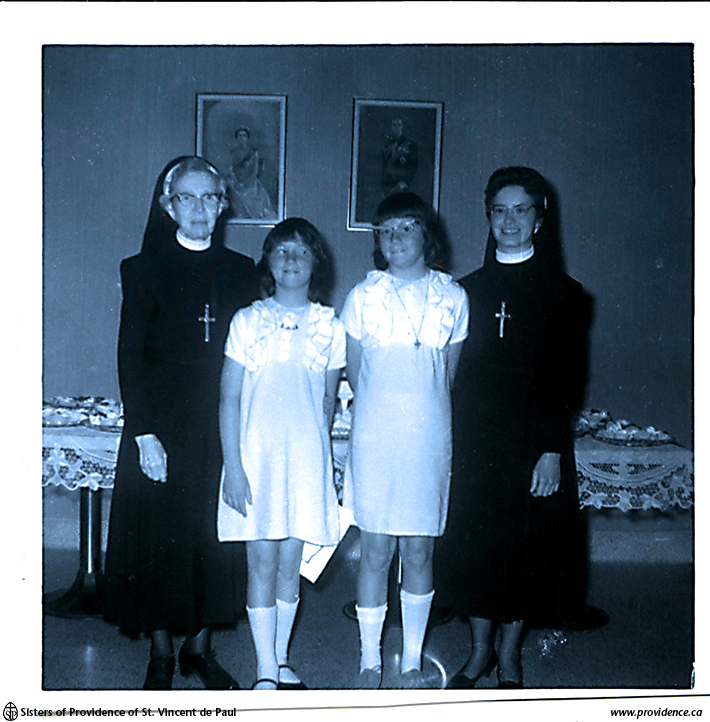 For Sister Rita, music and spirituality are entwined. Music “fills my soul,” she says, adding, “It’s so nourishing and so much a part of me. Making music, I feel the presence of God.” That was enhanced during a recent discernment about whether to return to teaching after a break. She decided that she had to: “It is in me all the time.” She returned to teaching with a renewed spirit. “I am enjoying it 10 times more than ever. I love it.” In fact, teaching in her apartment hasn’t felt like enough, so she has begun teaching at a music store, and has another five students there. She gets great feedback from her students who say she’s awesome, but that’s not the point for Sister Rita. “Teaching music, I am sharing who I am,” she says. “Through music, my spirit continues to grow.”

She returns to words spoken at the funeral liturgy of her friend and mentor, Sister Mary Sheila, with whom she taught at Providence Manor back in the 1960s:

“Our music teachers have the great privilege of instructing this universal language, a source of much joy. Through their work, they give to their students an appreciation of the finer things of life and elevate these to a spiritual dimension. Sister Mary Sheila lives on in her pupils and their accomplishments and in Christ.

“I can only hope for the same,” Sister Rita says. 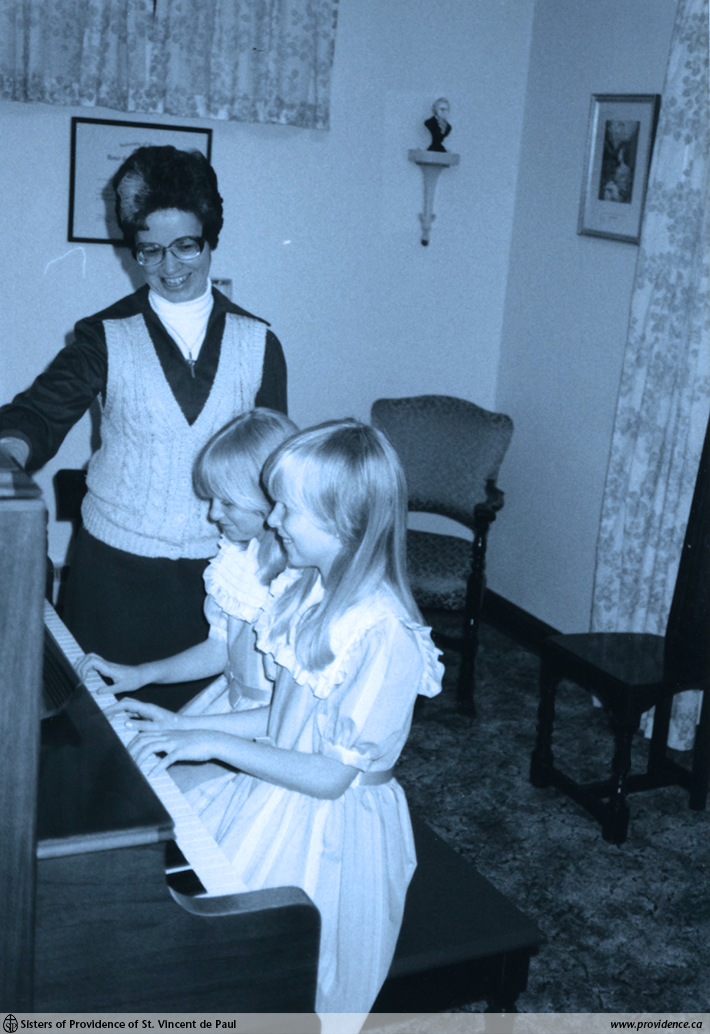