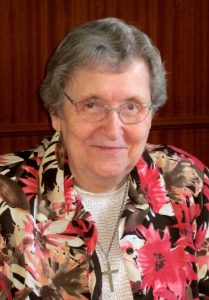 I grew up on a farm in southern Saskatchewan in a family of eleven children. Prayers were an important part of our daily lives. Sunday Mass, the rosary, prayers at meals and even the Way of the Cross during Lent were a regular thing.

During the summer we went to catechism classes taught by the Ursuline Sisters or the pastor. We also had correspondence courses from the Sisters of Service from Regina. I enjoyed these courses. But, like most children, we didn’t always welcome these interruptions of study from our play. Now, work was a different story.

The Great Depression was part of my teenage years. My parents’ faith was tested during this time but, with their inventiveness and our help, we survived it.

Movies were a rarity in our lives. One movie that I remember was about life in a cloister. Something from that movie touched me and stayed with me.

I completed high school in Fox Valley Valley, Saksatchewan in the middle of World War II. Many of us were invited to go to Teachers’ College in order to fill teaching positions left by enlisted men. I was not interested in teaching so I declined.

A few months later I joined the Women’s Division of the Royal Canadian Air Force in Regina. We received six weeks of basic training in Rockcliffe, Ontario which included aptitude tests. Then I was sent to Trenton airbase for a bookkeeping course. Upon completing my training in bookkeeping, I was sent to the airbase in Winnipeg where I worked as a bookkeeper. Some of my time was also given to participating in marching drills. On the bases we lived in dormitories with up to twenty women. As a result long standing friendships were established.

Now sixty-five years later, I know the ‘something’ as God who loves us unconditionally and faithfully.

God does have a sense of humour. The discipline of the RCAF prepared me for the rigours of religious life. I spent thirty-six years teaching. Upon retirement I worked for nine years in our retreat centre keeping the books. Living pre and post Vatican II has been a spiritual and glorious adventure.