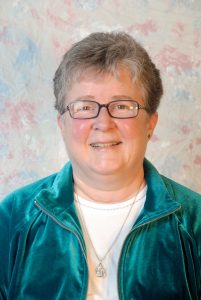 When I think of my call to religious life, I must admit that the process I went through to make my decision falls far short of the standards for discernment that we know today. Nevertheless, Providence was undergirding all the mundane experiences in my decision to join the Sisters of Providence of St. Vincent de Paul in 1964. The years have continually confirmed that choice.

I was born into a faith-filled Catholic family and was educated by the Sisters of Providence until grade 10. Life was very full for me but at no time did I consider what I wanted to do with my life over the long haul. During grade 13 in the public high school, a Sister who taught private piano lessons shocked me into laughter when she asked me if I had ever thought about joining a religious order. In spite of my laughter and protests, she invited me to think about it. I went off to university to find meaning and direction, and her “Think about it” gnawed at the pit of my stomach.

Some time later I signed up for a vocation retreat naively believing that I would somehow discover God’s will for me. I told the retreat director of my plight and asked his advice about what to do. He responded, “I guess you’ll have to try it.” That’s not what I wanted to hear! For a long period of time, I tried to put the idea out of my head, but it continued to disturb my stomach.

I then visited a priest whom I trusted in my childhood. He said he couldn’t help me but that he would make an appointment with a Sister who could. I kept the appointment with the General Superior in her office at Providence Motherhouse in Kingston. In our brief but delightful interview she gave me an application form and said I would be welcome to enter the Congregation of the Sisters of Providence of St. Vincent de Paul. Entrance date was just two months away so another Sister came by and took my measurements for a postulant’s dress. I filled in the required forms telling myself that I had to get “it” out of my system.

There were no dramatic signs, messages from God or knock-me-off-the-horse events. But over time I began to identify with the mission, charism and spirituality of the Sisters of Providence. I have engaged in a variety of ministries, e.g. teaching in elementary and high school, campus ministry in a university, ministry to the separated and divorced, pastoral counseling, and now Congregational leadership. In each one I have discovered more and more of the fullness of life. In my desire to serve humanity I have been greatly blessed. Our Provident God is full of surprises.