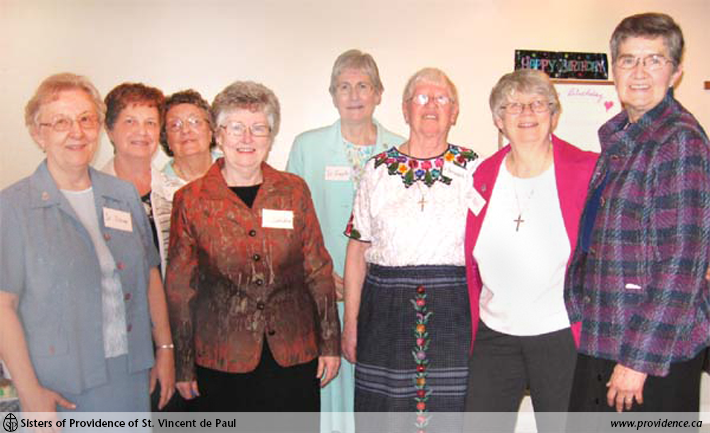 BY DIANE BRENNEN
On Saturday May 5th, nearly 140 people gathered in the dining room of Rosary Hall in Edmonton to mark its closing after 97 years of service as a refuge for women from the Edmonton area.

Sisters of Providence General Superior, Sister Sandra Shannon, spoke about the ministry of Rosary Hall in its early days and praised the present Sisters for continuing this ministry with love and compassion. Her source of history came from ‘Memoires of Rosary Hall’ written by Sister Mary Faustina’. In one story, she wrote about an incident in 1924, when a Sister of Providence tossed a medal of St. Anthony over the fence onto the grounds of the future site of Rosary Hall, asking for help in obtaining the property. Her prayers were answered.

The closing ritual was based on the light of Christ. As the opening song was sung, Sr. Bernadette carried in the Christ candle and placed it on a beautifully decorated centrepiece table, the focal point of the celebration.

Facilitator Sandie Prather then read a prayer followed by the voices of the past, present and future. Josephine Pallard, Program Director of ‘Changing Together, Centre for Immigrant Women’, the group moving into Rosary Hall, spoke about future plans to create a home for trafficked and immigrant women and children. Her group will offer healing activities and programs to help these women become more assertive, more self-sufficient and more resilient.

The festival of lights or Hanukkah is a Jewish tradition. Jesus said in John 8:12:

Since we wished to commission everyone to carry Christ with them to their new homes and places of work, vigil candles were given to the residents, staff, and all family and supporters of Rosary Hall.

Representatives from ‘Changing Together’ received the Christ Candle to carry on the spirit of Christ when they take over the building. They also received a yellow orchid symbolizing friendship.

In addition, beautiful memory books prepared by Sister Pat Amyot were presented to all the residents and staff as keepsakes.

Background: In 1915, the Sisters of Providence were asked to take charge of Rosary Hall, a hostel for girls coming to Edmonton from rural areas for education or employment. In the 1960s, the mandate shifted and the Sisters began caring for mentally ill women. In 1972, Rosary Hall officially became a halfway home for women with mental illness.
Source: Veronica Stienburg, Archivist