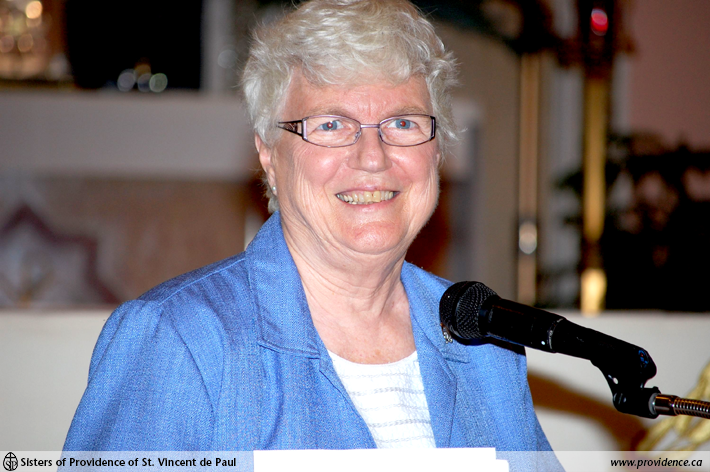 When I was a young girl growing up in St. Michael’s Parish,Belleville, it seemed that every Sister who taught me had either just come from teaching in Perth or when I returned to school in September, discovered that another Sister was transferred to Perth. After entering the Sisters of Providence, I always expected that someday I would be teaching in Perth. To my surprise, it never happened.

But here I am today, to receive on behalf of the congregation of the Sisters of Providence of St. Vincent de Paul, this lovely gesture in our honour. Thank you, Father Al Alilio and the good folks of Perth on the Tay.

However, I do so with very mixed emotions. Gratitude and Sadness. Gratitude, for all that has been accomplished over the years and Sadness because, not only was I never transferred here, but after 116 years of service to the people of St. John we, Sisters of Providence of St.Vincent de Paul, are leaving. There are no sisters to send. Sisters don’t grow on trees in Kingston. They come from families like yours and mine. But they’re not coming now. Is it because we are entering another era where the laity is called to take its rightful place in the church? Is God calling us to be smaller, to something different? Something new? What does Providence have in mind for us? And so, as in days of yore, we go forward in hope, knowing God is indeed with us as we dream religious life into its new future.

The Sisters of Providence, the only congregation of religious sisters founded in the Kingston Archdiocese, on December 13, 1861 is an apostolic order of vowed women religious, called to be channels of God’s Providence in the world through compassionate service in response to the needs of the time.

In the beginning our ministry was to serve the poor, the sick, the orphan, the prisoner and the elderly of the diocese. From the beginning, even before the convent was established, the sisters had contact with the people of Perth. The first record of the Sisters of Providence going to Perth is found in our Annals. Records show that in February of 1867 Sister Mary Seven Dolors (Horan) and Sister Mary John (O’Donnell) went to Perth to collect money and provisions for the care of the elderly at the House of Providence in Kingston. The sisters had been making collecting tours of the diocese since 1862, but this is the first specific reference to Perth.

On December 26, 1892, at the request of Archbishop Cleary, five Sisters of Providence of St. Vincent de Paul arrived in Perth to teach in St. John’s School. Sister Mary Berchmans (Candon) was the local superior of the Convent and Sister Mary Philip (Murray) was the principal of the school. Sisters Mary Teresa (Mangan) and Mary Leo (Tierney) were teachers at the school and Sister Mary of the Immaculate Conception (O’Dea) was the music teacher in the convent. In return for teaching at the school the sisters received $600.00 each year because there were no school grants. In fact we have our Catholic School System and Catholic Hospitals today because congregations like ours nursed and taught for “peanuts.” The trustees supplied the fuel for the convent. The sisters took charge of the sacristy and the choir. For this work, the pastor paid them $150.00 a year. They supplemented their income with the money they received for music lessons. The Sisters of Providence taught at St. John’s School from 1892 until 1988. The last teacher in the school was Sister Bernice Boyle (Mary Henrietta). Although not teaching in the school after 1988, the sisters continued to serve in St. John’s Parish until now. 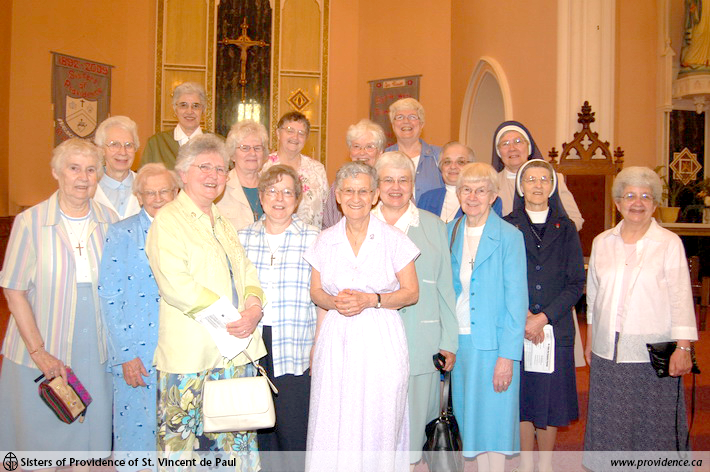 The people of St. John’s Parish have always supported the sisters and their various ministries in the parish. As well, when the sisters did their annual collection in the diocese for the care of the elderly at the House of Providence, the parishioners of Perth were always generous.

From 1892 until 1991 the sisters taught music to persons of all faiths at the music studio in St. John’s Convent. Sister Margaret Mary (Lines) was the last music teacher. Throughout the years the sisters have worked with the priests of the parish in many ways. They served as church organists, choir directors, sacristans, trained the altar servers, looked after the Children of Mary, the Sodality and did pastoral visiting. Sisters Virginia Amodeo and Mary Publow were hired as the first lay Sister Parish Assistants in 1989, and Sister Josephine Doiron is the last, bringing this era to a close, with her retirement.

The first convent, which had been purchased by the parish for $1750.00, was a brick house located near the school property. Furnishings for the convent were provided by the Altar Society. The sisters lived in this house from 1892 until 1905. On May 8, 1905, they moved into a spacious stone convent which the parish had built for them. This building would serve as their home for 81 years. December 4, 1986, the sisters moved into their present convent, newly built for them by the parish. From 1892 until today more than 146 sisters have ministered in Perth over the years.

Many of these sisters endeared themselves to the people on the Tay. Especially remembered are: Sister Mary Juliana (McMahon), who taught primary school here for 27 years; the hospitable, musical and joyful Sister Mary Carmel Teresa (Desjardins) who taught music, lead the choir as director and organist for 18 years; Sister Loretta McAndrews (Mary Loretta) who taught school for nine years (1967-1976) and during that time worked diligently to improve both the school facilities and the curriculum; Sister Mary Berna (Le Sage) who was very instrumental in promoting the sodality for the girls and establishing the high school: Sister Mary Annette who was loved by the boys for her sportsmanship; Sister Mary Wilhemena who, with her crackling humour, drew all into her circle of friendship. It was from Perth that Sister Mary Alexander (Julia Hamilton) was chosen for our first foreign mission in Guatemala in 1967.

I asked a few sisters who ministered in Perth for their impressions. Every one of them said it was the people (and quickly added) and their faith that they remembered:

“The music teachers were very in instrumental in our lives,” says Sister Irene Wilson, a native of Perth. All of the sisters had an affect on the young women of Perth — 24 young women left home and joined the Sisters of Providence because of the influence of their sister-mentors. The first was Sister Mary Elizabeth (Stafford) in 1868—even before the sisters arrived; the last was Sister Alda Brady in 1988. From among the Perth women who became Sisters of Providence one was a General Superior of the congregation:, another, an historian, and author and gold medalist of Queen’s University; many fine school teachers and music teachers; others shone in Health Care; spirituality; early childhood education; master of Ti Chi Chi, in the Central American missions and with the homeless street people.

Sharing our individual giftedness we have carried out diverse ministries in collaboration with many of you and others to bring about the Reign of God. Now it’s your turn to do the same. Our Providence Associates, enthusiastically initiated and supported by Sister Mary Publow, can help. Although Shirley Kindellen, Colleen Evans and even Margaret Frizell in Lanark Lodge where Sister Joey and many others ministered, are not members of the congregation, they are called to live out their Baptismal promises by sharing in our charism, spirituality and mission in their own life style. This is one way that the “Providence Presence” can live on, as well as by through those of you who have also been touched by the charism and spirit of Providence. Keep the Providence Presence alive TOGETHER!

We, Sisters of Providence of St. Vincent de Paul, will never forget the People of Perth. 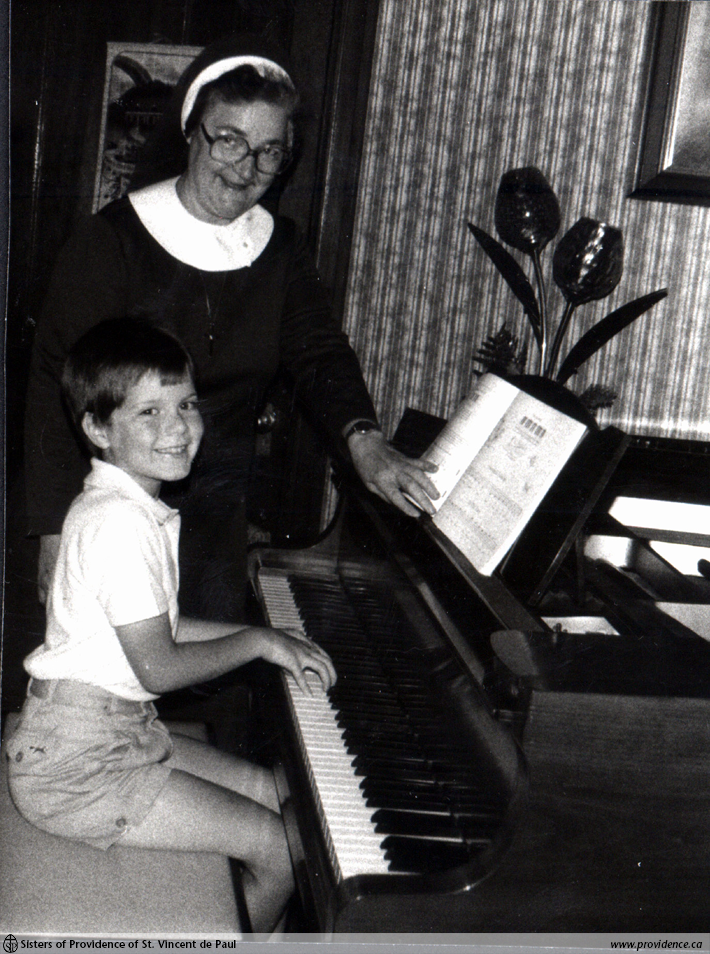 In this undated photograph, Sr. Margaret Mary teaches piano to a young boy at St. John’s convent in Perth 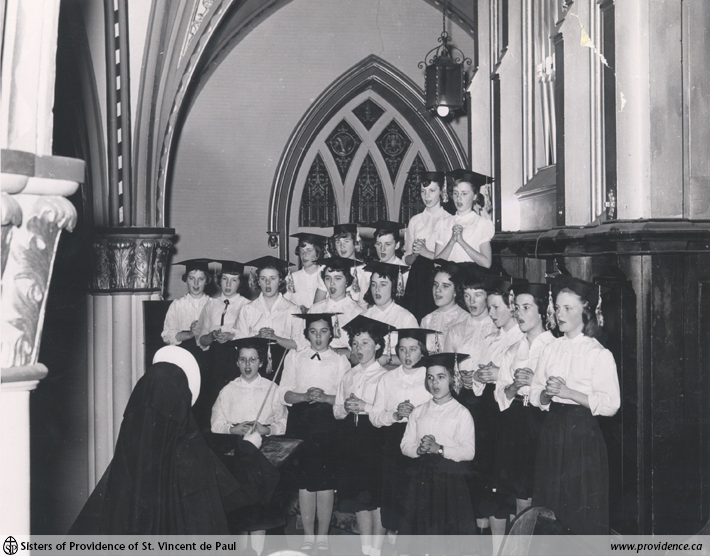