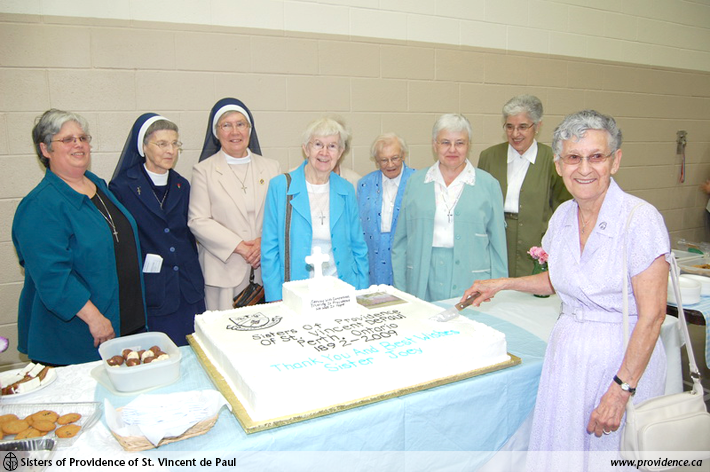 The end of an era was marked with laughter, tears and memories during a special Thanksgiving Mass at St. John The Baptist Parish in Perth on Sunday, June 21.

After 116 years of dedicated service, pastoral ministry and teaching, the Sisters of Providence are leaving Perth.

Sister Josephine (Joey) Doiron, the last Sister to serve the community, was overcome with emotions as she spoke to the congregation following Sunday service on a beautiful first day of summer. Referred to as the “diminutive dynamo” Sr. Joey was greeted with a steady stream of well-wishers and offered many gifts, including a soccer ball signed by students at St. John elementary school. Perth Mayor John Fenik thanked Sr. Joey for her hard work, generosity and spirituality. He gave her a picture book on Perth called This Fair Town.

18 Sisters of Providence attended the event and were presented with a large plaque engraved with the name of every Sister of Providence who ministerd in Perth since 1892. It has been erected inside the main entrance of the church.

“Are we are entering another era where the laity is called to take its rightful place in the church? Is God calling the Sisters to be smaller, to something different? Something new? What does Providence have in mind for us? And so, as in days of yore, we go forward in hope, knowing God is indeed with us as we dream religious life into its new future.”

Sister Pauline expressed disappointment at never having the opportunity to minister in Perth, and acknowledged all 130 Sisters who made a difference there.

“Sharing our individual giftedness we have carried out diverse ministries in collaboration with many of you and others to bring about the Reign of God. Now it’s your turn to do the same. You are called to live out your Baptismal promises by sharing in our charism, spirituality and mission in your own lifestyle. This is one way that the “Providence Presence” can live on,” said Sr. Pauline.

As for the future, Sister Joey says travel and rest top her “to do” list.