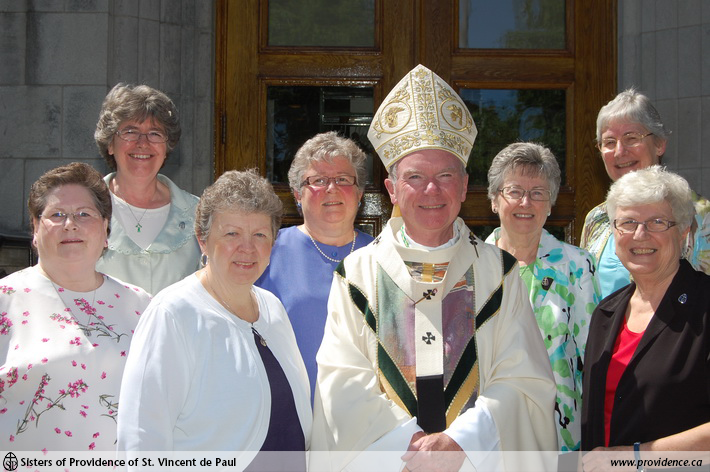 The Sisters of Providence of St. Vincent de Paul have elected a new leadership team to a four-year term during the congregation’s 37th Chapter gathering. The term Chapter is used by religious congregations to describe a general meeting of elected participants. The outcome of Chapter is two-fold; setting direction for the next four years and electing a Leadership Team (governing executive) for the same period.

Sister Sandra Shannon has been elected General Superior. Sr. Sandra brings experience to the role having spent nine years on the Leadership Team in the past. Her background is nursing, initial formation ministry for the congregation and most re-cently, Spiritual Care at St. Mary’s of the Lake Hospital.

“We leave our Chapter gathering full of life, hope and joy for ourselves and for those we serve,” said Sr. Sandra.

General Assistant Sister Frances O’Brien also brings experience to her new role, having previously served on council for two terms. The former teacher and current pastoral counselor and process facilitator with experience in conflict resolution, plays a key role in the congregation’s ongoing commitment to eradicating violence against women. A member of the Healing Violence committee, Sr. Frances has helped bring attention to the issue by attracting renowned guest speakers over the last decade.

Sister Gayle Desarmia marks her inaugural term on Council. A former school librarian, and current Archivist for the congregation, Sr. Gayle has also served as Chair of the Catholic Archivist Group. In June 2008, she received the Alexander Fraser award given by the Archives Association of Ontario for her dedication to Archives and the national impact of her efforts to preserve the records of the Sisters of Providence.

This marks Sr. Una Byrne’s second consecutive term on Council. She moved back to Kingston in 2007 to serve on Council after spending eighteen years ministering in northern Ontario and Manitoba. While based in Moosonee, the former teacher travelled extensively through the north working with the First Nations.

“My service in leadership has provided experience full of rich opportunities and blessings — the greatest being getting to know and love our sisters at a level I might never have had before. Blessings on our wonderful new Leadership Team,” says Sr. Pauline.

In recognition of their Leadership, the outgoing Council members recieved a generous token of appreciation from the congregation.

In addition to the election, the 66 Sisters gathered at Chapter also examined the congregation’s direction for the future.

“Chapter is a sacred time, a holy time, a time of renewed friendship and sisterhood, a time of examining and planning, a time of questioning and dreaming, a time both of doubt and delight, a time of some anxiety and fear, of challenges and hopes,” said outgoing General Superior Pauline Lally during her opening address.

Despite advancing age and diminishing numbers, Sr. Pauline believes the future is bright.

“Women get bolder as they get older. Being smaller has potential for being more intimate in our own relationships which sustains us. Relations are so necessary now, perhaps even more so, than our works, as the strong, large labour force of the Church, once were,” said Sr. Pauline.