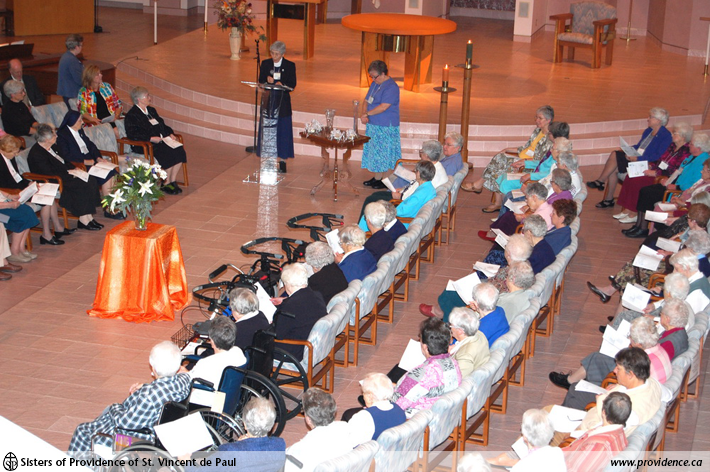 Sisters of Providence of St. Vincent de Paul formally welcomed Sisters from two congregations during a welcoming ritual on October 2nd in the Chapel at Providence Motherhouse.

It’s been more than 80 years since siblings Mary and Julia Hamilton lived together on the family farm in Elgin with their parents, brothers and sisters in the 1920’s, unaware that their life journey would reunite them under one roof again, so many years later.

Sisters Julia and Mary are also religious sisters who belong to different congregations. This summer, Sister of Providence Julia Hamilton and the rest of her SP community welcomed into their home 27 women religious from two different orders, CND (Congregation of Notre Dame) and RHSJ (Religious Hospitallers of St. Joseph). Their permanent move to 1200 Princess Street, dubbed ‘Project Hospitality’ is now complete.

The Hamilton sisters now reside footsteps from each other in bedrooms across the hall on the first floor of Providence Motherhouse.

“The Sisters of Providence have been so welcoming and kind,” says Sr. Mary, CND, who has made the move from her community’s home on Wright Crescent. The RHSJ Sisters left their Amherstview regional house.

“We understand how difficult it is for them to leave their homes,” says Sister Julia. “Especially as seniors.”

Sister Margaret Morrissey is in new surroundings and settling in quite well. The affable RHSJ Sister also resides on Marian 1, just down from the Hamilton sisters. But change is easy for the former nurse and pharmacist, having worked in Chicago, Wisconsin and Ottawa.

It’s a brisk September morning, Sister Margaret has just returned from an early morning hair appointment down the hall from her new room. She settles in to talk about her life and her new home.

“It’s been a small adjustment with lots of walking in this big building, but I don’t mind” Sr. Margaret says.

For Nursing Director Amy Litchfield, it’s been a hectic summer of preparing for the new residents and hiring 23 new staff to accommodate their needs. Amy admits it’s been chaotic at times with the increase in volume and activity in hallways and on the nursing unit, but adds the new residents are settling in better than she could have hoped.

“The hardest part has been orientating the Sisters so they don’t get lost in this big building. I should give them all a GPS,” said Amy with a smile.

Amy sends a big thank you to Motherhouse staff and says they’ve been “running at full tilt.”

Amy and Program Coordinator Nancy Stevens had an opportunity to meet with the Sisters in their Kingston-based homes prior to their move. “We are enjoying the new buzz around the Motherhouse and hope that everyone in the house feels included,” said Nancy.

Sister of Providence Una Byrne spent her summer overseeing the project along with other members of the Transition Team. “I believe this has been an enriching and stretching experience for us all! The cooperation of everyone, Sisters from all three communities and our ever generous and gracious staff, has made the move smooth and exciting in spite of an essential elevator being out of commission at the time. Our Sisters continue to help the new Sisters learn the ropes and find their way around our beautiful but big home!”

The new Sisters were formally welcomed at a special liturgy in the Chapel in early October. It was highlighted by a poignant moment when the symbolic flowers of all three congregations came together to make one beautiful bouquet. A lovely souvenir booklet was given to each congregation featuring a poem penned by a few Sisters of Providence. 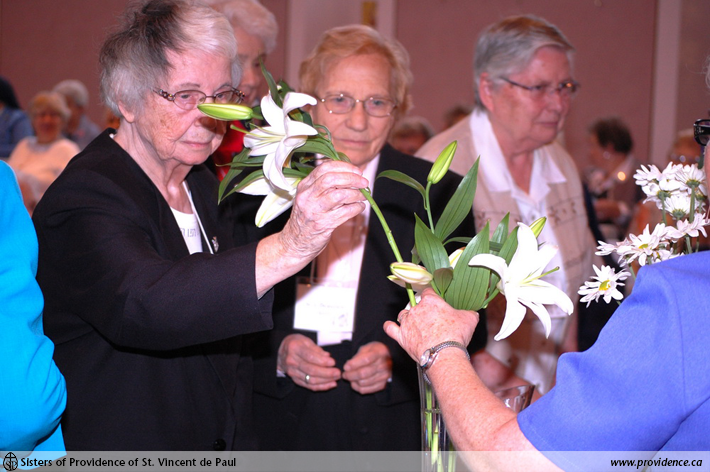 During this poignant moment, Sisters from all congregations combined the three symbolic flowers from their congregation to make one large bouquet. l to r: Sisters Loretta Gaffney, RHSJ, Aurore Beaulieu, RHSJ and Norma Millan, CND.

In her remarks, General Superior Sister Sandra Shannon acknowledged that the experience came with a human cost, causing turmoil, loss and grief for all three communities. But she adds, this transformation is a positive move. An excerpt from her welcoming address appears here.

“Sisters of the Religious Hospitallers of St. Joseph and Sisters of the Congregation of Notre Dame, you entered among us as strangers. Matthew 25 says: “When was it we saw you a stranger and welcomed you.” Well that was the last two weeks of August. But as strangers you gift us. You are pearls of great price – treasures. Why? Because you bring to us the gift of diversity, a gift that colours our world, brightens it with many hues. It’s the gift of seeing life from a different perspective. Diversity keeps us from boxing ourselves into tiny spaces with little room to breathe and expand. The routine of same old, same old which brings staleness and lack of meaning to our lives is out the window. Your presence has instilled new routines and the opportunity to practice ministry right here at home. Your presence calls us to practice the gift of Hospitality of the Heart for which the Sisters of Providence are well known. Hospitality of the Heart is more than lip service, it urges us to open our hearts, to show patience, kindness and graciousness. Hospitality of the Heart causes us to set aside estrangements, fear, and hostility to do our best to approach the stranger as a creation of God and therefore one with us. 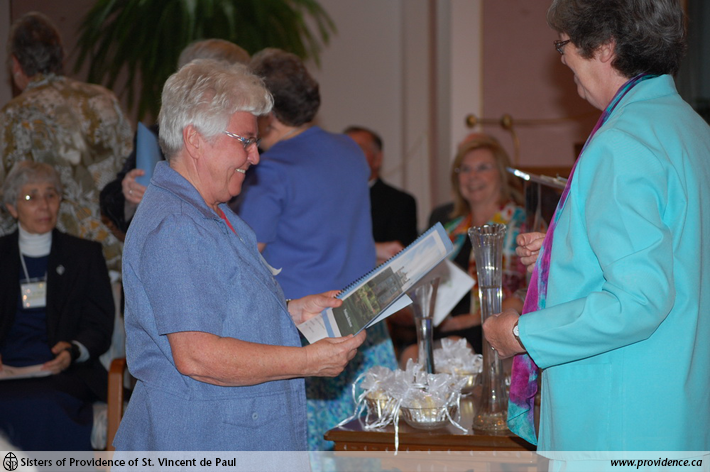 We welcome you in the spirit of Hospitality of the Heart. We trust that as time goes by we three groups of Religious women will live the life St. Paul in Ephesians 4 describes: “I urge you to live a life that measures up to the standard God set when he called you. Be always humble, gentle and patient. Show your love by being tolerant with one another. Do your best to preserve the unity which the Spirit gives by means of the peace that binds you together.”

Sister of Providence Dianne McNamara spent 3 months producing these lovely, handmade cards as her personal contribution to Project Hospitality. In total, Sister Dianne created 80 cards with personalized greetings in each one. She sent cards to the new Sisters, to her own community and staff.

“To see the vision made a reality is awesome and showed me the hard work everyone involved has done. Like anything new, there are bound to be hiccups but I am confident that with patience, humour and creativity any new problems will be resolved. It is a wonderful tribute to everyone involved to see this beautiful witness of a broader sense of community and Church with the three congregations living under one roof.”
— Sr. Dianne McNamara