In April, with joy, the Sisters renewed their mission and decided to create a village 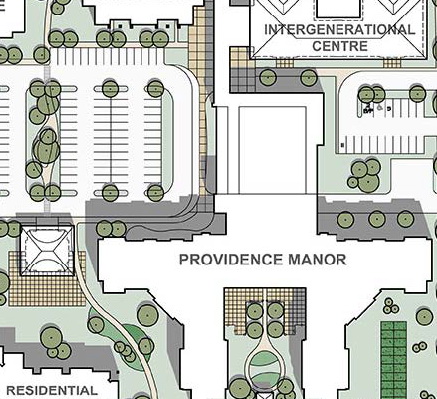 Everybody wants to see the plans! We have a long way to go first. This is a mockup only.

Every four years, the Sisters of Providence hold decision-making meetings the Church calls “Chapter.” In April of this year, big decisions were made that direct the future of the Congregation and the use of their land. These decisions were made public in May to great interest and applause.

The Sisters endorsed three statements that seem quite simple but hold the seeds of grand plans.

Their vision is short and to the point: A world where the vulnerable experience compassion, justice and peace.

Their new mission statement expands that by identifying themselves as “channels of God’s Providence” who use all their resources to bring about the fullness of life for all God’s creation.

Finally, the directional statement of the next four years gets more concrete again. It accepts the Sisters’ situation with joy as they “embrace our present reality from a contemplative stance.” It offers full support to the Providence Associates, now 30 years old, who also are figuring out what lies ahead. And it offers guiding princples for long-range planning.

The three-point statement is the mandate of the new leadership team that were installed on June 14 at the Motherhouse. Sister Sandra Shannon remains the General Superior, a position she has held for the past four years.

Soon after their Chapter, the Sisters announced the concept of Providence Village. It would transform the 30 acres and the buildings of the Motherhouse into a hub of services for the vulnerable of the city.

The full plan envisions many forms of housing, resources for the elderly and the challenged – a host of possibilities. But the centerpiece is to give a new home to Providence Manor. Providence Care’s provincially-funded longterm care home, Providence Manor was originally founded by the Sisters. The ties are strong. Providence Manor needs a new site in the next 10 years and this offer of land looks most hopeful.

A feasibility study to be conducted over the next six months will indicate how this plan will go forward and how it might be achieved. There are many players to bring to the table and, no doubt, there will be questions to answer. But the possibilities are great and the excitement of the Sisters is tangible. This is their mission come full circle. This is a living legacy, one of many.