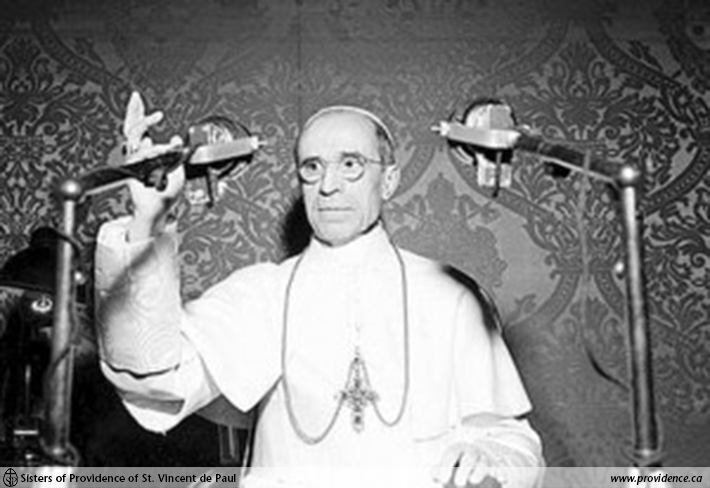 In these times of mass media coverage we take for granted seeing and hearing Pope Francis on television, radio and online. This access was not always the case…what if you had never heard the voice of the Pope? What would the first time you heard his voice mean to you?

The pope addressed the world’s Catholics via radio for the first time on February 12, 1931, during the inaugural broadcast of Vatican Radio. Pope Pius XI made his remarks in Latin. This event was mentioned in the annals of several of the congregation’s missions.

The annalist of St. Peter’s Convent, Trenton, wrote: The whole world listened in to hear our Holy Father speak. We all heard him and the other conversations which took place between Rome and New York very distinctly. A Red Letter Day for the whole Catholic world to hear the Pope’s voice.

Congregational Annals, House of Providence, Kingston: Community Mass as usual. Today the coronation anniversary of our Holy Father, His Holiness’ voice was over the whole world, through the radio. We heard him distinctly here in Latin – His discourse was given in English – from New York a few minutes later. It will likely be published in the paper tomorrow. We had benediction this evening.

St. Vincent de Paul Hospital Annals, Brockville: There were five admissions and three discharges. This morning around 11 o’clock we had the privilege of hearing the Holy Father speak over the radio. Mr. John Edgeley of Mallorytown was admitted late this evening and operated on by Dr. Judson.

Providence Shelter Annals, Winnipeg: The Pope’s voice was heard over the radio all over the world for the first time in history.