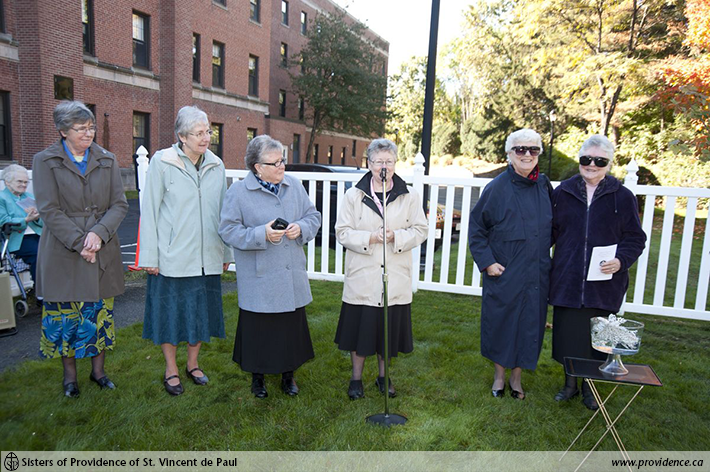 Months after the Canadian Sisters of Providene of St. Vincent de Paul wrapped up their 150th anniversary year, their U.S. counterparts celebrate their remarkable journey.

Kingston Sisters made the trip to the U.S. as the Sisters of Providence of Holyoke held three major events over the weekend of October 13-14 to celebrate two significant milestones in their congregation’s history: the 120th anniversary of their years as an independent congregation in the Springfield Diocese in 1892 and the 140th anniversary of the first Providence Sisters’ arrival in western Massachusetts in 1873.

That afternoon the Holyoke SPs, Associates, and Canadian SPs gathered with local city and state dignitaries, board members and leadership of their sponsored ministries for an anniversary celebration at Mercy Medical Center in Springfield. Among the program’s highlights were a brief review of the congregation’s history and the announcement of three initiatives the Holyoke Sisters are funding in support of three community priorities – Women, Earth, and Those Who Are Poor. Also copies of the Sisters’ new book, entitled 140 Years of Providential Caring were distributed to the guests.

The weekend closed following a Sunday morning Liturgy of Thanksgiving celebrated by the Most Reverend Bishop Timothy A. McDonnell in the Sisters’ chapel at Providence Place. The congregation presented Offertory gifts emblematic of their history and heritage including a portrait of Mother Mary of Providence and the community’s original Constitution and official Congregational Seal.

Both the Kingston and Montreal SPs were a major focus at two of the procession’s three stop sites including the west side of the building where the tree the Kingston Sisters gave the Holyoke Sisters as their remembrance of Kingston’s 150th Anniversary in 2011. At that site Sister Kathleen Popko said: “We pause in our procession at these two symbols: The first, representing the Sisters of Providence of Montreal, is this poster of Mother Emilie Tavernier Gamelin, which was printed at the time of her beatification on October 7, 2001. Her words on the poster say: ‘I pray that you would always love the poor and that peace and unity would always be with you.’

“The second symbol is this tree planted a year ago,” she continued. “It was a gift of the Sisters of Providence of St. Vincent de Paul from Kingston given on the occasion of their 150th anniversary celebrated in May 2011. 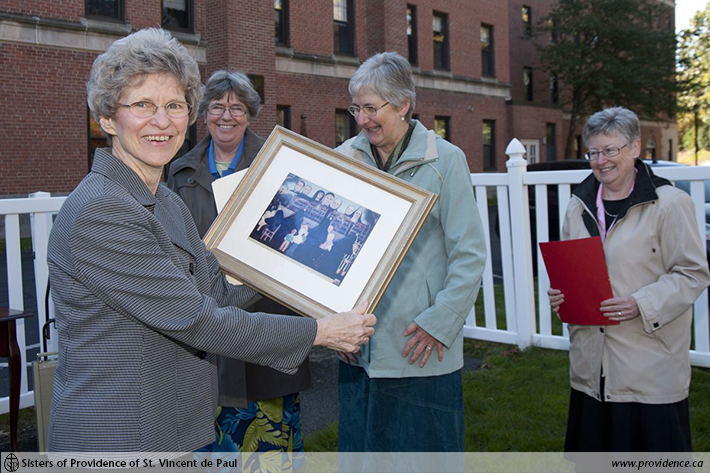