The Sisters of Providence have long made a commitment to preparing for the future by preserving their past. Nowhere is that more evident than at Providence Motherhouse, the Kingston, Ont., home base of the congregation, where an archival program has been in place since the 1970s. 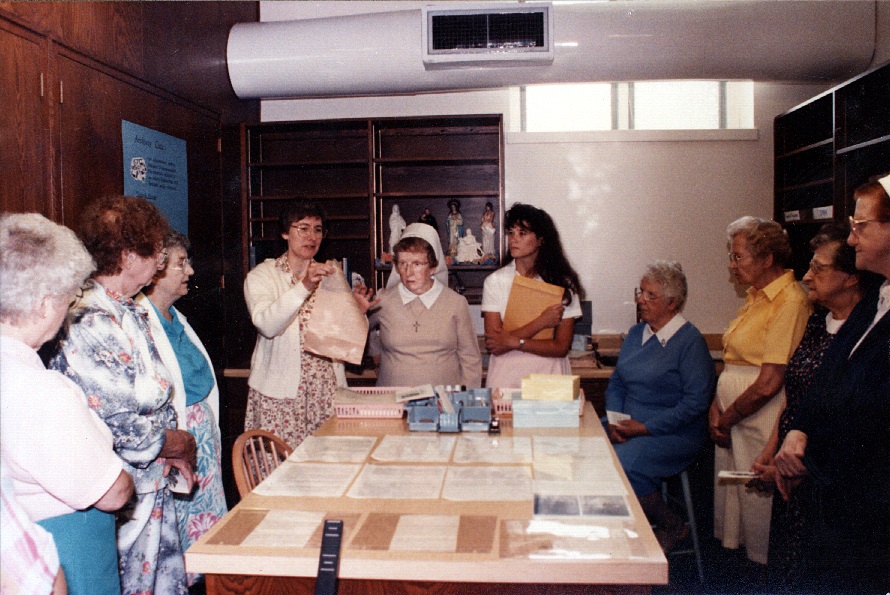 For the past decade, the Motherhouse archives staff has been offering expertise and support to the congregation’s sponsored health care institutions as they began developing their own institutional archives collections.

“It’s a very exciting time for us,” says Sister Gayle Desarmia, archivist for the congregation. “All across Canada members of our health system are preserving important historical records that will tell people for generations to come about the role that women religious, and the Sisters of Providence in particular, have played in developing health care in this country.”

At the same time, Sister Gayle notes, researchers will have at their disposal a gold mine of information. “These institutional archives are preserving a valuable window on the history of health care in Canada.”

Information in these archives can include anything from telegrams, correspondence and newspaper clippings, to registers, and photos of the pioneering Sisters who established the health care facilities.

Several of the institutions within the Providence Health Care System have been working to preserve collections of important data. St. Joseph’s Hospital in Edmonton, founded by the Sisters in 1927, began developing its archives in May with a visit from Sister Gayle. Sister Gayle also visited St. Mary’s Hospital in Camrose, Alta., in May to follow up work begun there in the early 1990s.

The most exciting developments have been at Providence Place for Holistic Health in Moose Jaw, which is now establishing an archives of the Saskatchewan institutions sponsored by the Sisters of Providence.

The Sisters have a long history of helping the poor and sick in that prairie province, beginning in 1912 when a typhoid epidemic raged through Moose Jaw. The pastor of St. Joseph’s Church, Father Francis Woodcutter, asked Archbishop Mathieu of Regina for help. He in turn sent word to the Sisters of Providence. The Sisters had first gone west in 1908 to create a hospital in Daysland, Alta. The first two Sisters, Mary Angel Guardian and Mary Camillus, arrived by train from Daysland on Nov. 14, 1912. They purchased a building before the day was out and had their first patient two weeks later.

By 1939, Saskatchewan’s early settlers were aging and the Depression had left many without financial resources. The Sisters were asked to take on the task of caring for them, and the former Presbyterian College for Boys was purchased. Repairs and renovations began immediately to create St. Anthony’s Home.

The hospital and home operated independently until the administrations merged in 1983 and, in 1995, both institutions were closed. Moose Jaw Union Hospital took over all the acute care medical services in Moose Jaw, and Providence Place was opened to replace St. Anthony’s Home in caring for the aging of Moose Jaw and southern Saskatchewan. The duties of the Sisters had already shifted from administration and direct medical services to pastoral care duties which continue today at Providence Place.

In the fall of 2000, Providence Place CEO Raymond Mulaire and Motherhouse archivist Sister Gayle Desarmia felt the time was right to organize the records in Moose Jaw into a proper archives.

The first task in setting up the archives was to hire an experienced archivist to undertake the organization of the collection and oversee the renovations to the proposed storage and work space. Through the provincial archival council, contacts were made with an experienced project archivist, Joe LeClair, who had recently moved to Moose Jaw.

The next step was the completion of grant applications for federal funding through the Canadian Council of Archives. A successful application helps with the cost of organizing the main collection and placing the records in acid free boxes and folders.

Renovations are under way on a room being converted into an archival storage area and workspace for the archivist. A drop ceiling is being put in place and the floors tiled. Temperature and humidity controls have been installed to create a storage area that meets accepted archival environmental standards.

Appraisal and selection are also a big part of the archival process, notes Joe LeClair. “Key judgements have to be made as to what to keep and what is not of long term value.” In most cases, he notes, much of the material in storage has little historical or evidentiary value and will be disposed of. However, it is essential that a professional archivist be involved in the process of discerning what to preserve for posterity. LeClair advises those considering developing their own archives to consult a professional before disposing of any items.

With the records ready to go in Moose Jaw, arrangement and description of the main collections should be completed by June 2001. Separate groups of records will be defined for the three institutions, as well as the auxiliaries which helped support them and the educational programs such as the school of nursing. The photographic collection will be processed later as a separate project. Finally, a volunteer archivist will be appointed and trained to oversee the collection on a continuing basis.

“Looking after our records is a big commitment, and an ongoing one,” notes Sister Gayle Desarmia. “But it is definitely worth it to preserve such an interesting phase in Canada’s past.”