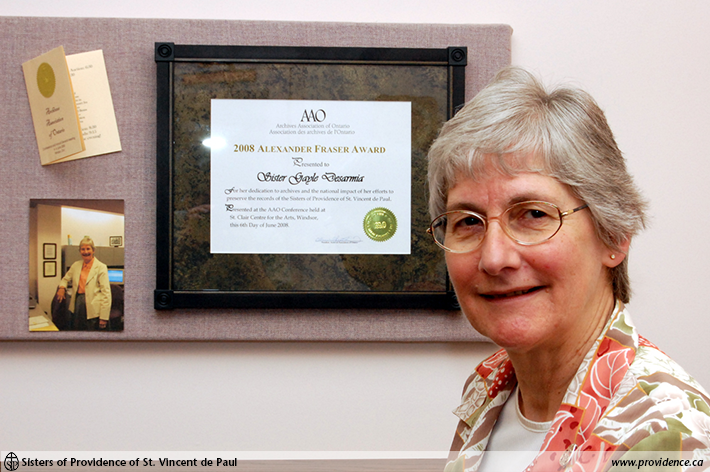 Sr. Gayle Desarmia has become the first archivist from a religious order to win an award given to an individual who has made a significant contribution within the Ontario Archival community.

Elgin County archivist Brian Masschaele submitted the nomination along with research by Danielle Hughes and Tom McCarthy, both employees of the Archives at Providence Motherhouse.

Danielle accepted the Alexander Fraser Award on behalf of Sister Gayle at an awards banquet held in Windsor on June 6, 2008.

Sr. Gayle heard the news while out of town. Her initial reaction was “is this for real…it is a total surprise!” After some reflection, she offered these words.

“I am surprised, honoured, I thank those who nominated me. I am sorry not to be present to receive the award in person.”

When the Sisters of Providence of St. Vincent de Paul transferred their many health care institutions to various catholic heath care providers, Sr. Gayle travelled across the country, from Ontario to Alberta, organizing the hospitals’ archives and making arrangements for the transfer of the Sisters records to Kingston. After the transfers were completed, Sr. Gayle continued to offer her advice and expertise to the institutions. When the Women of Providence in Collaboration set up an Archives office, they called Sr. Gayle for assistance in April 2008.

Sister Gayle and her staff have been active in the Kingston community with involvement in various projects, including the annual Heritage Fair.

No project is too large for Sr. Gayle who has participated in various large scale research projects, most recently for the Catholic Health Association of Canada. It required extensive research on all of the Congregation’s Hospitals across Canada.

In 2007, the Sisters of Providence of St. Vincent de Paul published a continuation history book of the congregation’s history from 1961 to 2006 and Sr. Gayle played an active roll on the history book committee as well as facilitated the author’s research.

Within the Congregation, Sr. Gayle was instrumental in establishing and maintaining two museum facilities; the Heritage Room at Providence Motherhouse and the Printing Room Museum at Providence Manor.