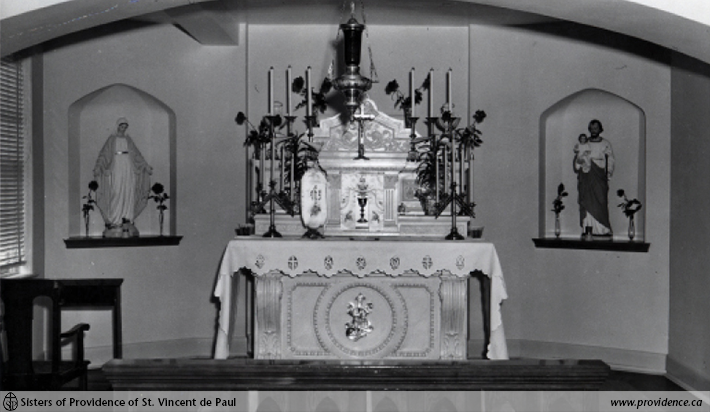 Ninety years ago, Sister Mary Angel Guardian Mangan supervised the building of St. Mary’s Hospital in Camrose, Alberta. The hospital opened in October 1924 and was staffed by eight Sisters.

While, according to the annals, the Sisters’ days were “spent opening boxes, unpacking furniture, trying to place it, picking [their] way among workmen of all trades,” they also had to go to the parish church every day for Mass, as the hospital chapel was not ready yet. The hospital’s annals document how the cold and snowy weather made the journey to Mass quite difficult – and even impossible at times.

October 29, 1924 – The evening brought a heavy snow fall which made the roads bad especially going out to Mass.

November 4, 1924 – The church was so cold that Mass was celebrated in the priest’s house.

Much to the Sisters’ delight the first Mass in the hospital chapel was celebrated on November 12, 1924. November 12th ended up being an exciting day for another reason. According to the annals:

This seems to have been the first operation in the new hospital.

The chapel was furnished over the next year, including the purchase of an organ in late November 1924, the erection of the Stations of the Cross in February 1925, and the arrival of the statues of Our Lady and St. Joseph on December 18, 1925 (visible in the photograph) and the acquisition of a wax infant for the Christmas crib for Christmas 1925. 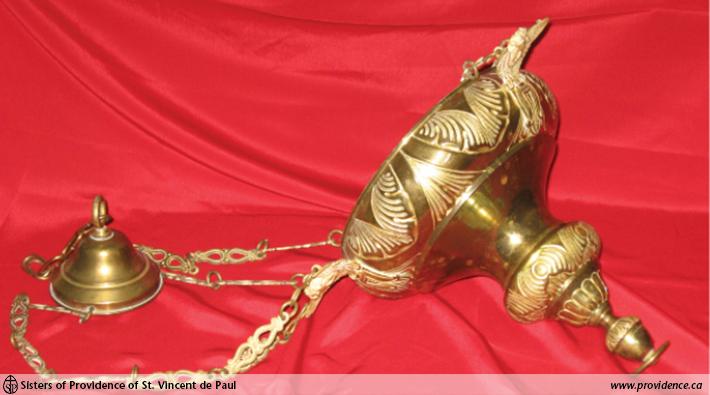 This sanctuary lamp is from the Chapel of St. Mary’s Hospital, Camrose, Alberta, and is part of the Archives collection. The Catholic Church instructs that a light be kept burning near the tabernacle where the Blessed Sacrament is stored to indicate the presence of Christ.