Lillian Blanchfield, her two sisters and her two brothers, were “rescued” from the Shaw Street Workhouse in Liverpool, England by the Catholic Children’s Protection Society of Liverpool.

They crossed the Atlantic in 11 days aboard the Parisian steamship in the company of Mrs. Lacey and 60 other home children. On June 11, 1889, Mrs. Lacey delivered the children to the House of Providence in Kingston. Lillian stayed at the House of Providence for 17 days before leaving her siblings behind when she left with her new guardian, Mr. J. Black, a butcher in the town of Hastings. It was 18 years before she saw her sisters again. Unlike the experience of many home children Lillian was adopted into her new family and given the name Veronica Black.

On January 3, 1898 Lillian entered the Sisters of Providence as a Tertiary and was given the name Sr. Nora. Tertiaries were auxiliaries who performed domestic labour and were part of the Congregation from 1895 to 1907, when they were allowed to enter the novitiate.

Lillian served at the House of Providence and then at St. Vincent de Paul Hospital Brockville before entering the novitiate in 1907. She took her first vows as Sr. Mary Angelica on April 24, 1909 and served in Kingston, Trenton, Belleville and Tweed. She died on June 4, 1927, having spent 28 years in the community. Rev. H. Black and his brother Leo Black, probably part of her adoptive family, attended Lillian’s funeral. 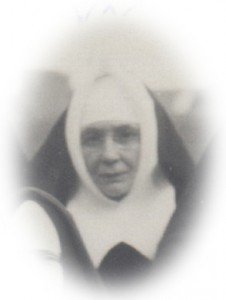 There are no known photographs of Sr. Mary Angelica. Another home child to enter the Congregation was Sr. Mary Benita (Marjorie Wherry), pictured here.