The 400 ‘Home Children’ who passed through the House of Providence 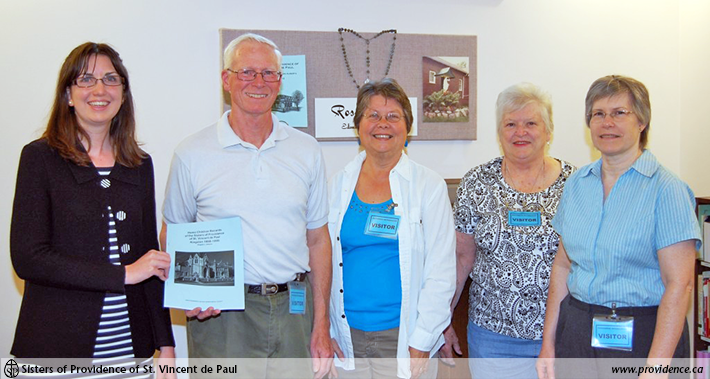 Members of the Kingston branch of the Ontario Genealogical Society Kingston undertook the significant job of transcribing the Congregation’s records of the home children. Here, OGS representatives present Sisters of Providence archivist Veronica Steinburg (left) with the published copy of the records

Between 1870 and the late 1930s over 100,000 “home children” were sent to Canada from Great Britain. Due to the industrial revolution, cities in England in the mid-19th century were overcrowded and living conditions for many poor and destitute adults and children were terrible.

Over 50 different charitable and religious agencies participated in what was considered rescuing impoverished children by sending them to Canada where they were received by distributing centres and then placed in homes. Unfortunately, many children were permanently separated from their families and were exploited as domestic servants and farm labour in Canada.

In the summer of 1887, the Sisters of Providence were asked by the Catholic Children’s Protection Society of Liverpool (CCPS) to receive what were described as “English Orphans” and to place them in homes in Canada. The Congregation, which had been looking after local orphans since it was founded in 1861, agreed.

The Sisters ended their contract with the Catholic Protection Society of Liverpool in 1891 because the Society had begun sending children with developmental and physical disabilities in spite of previous agreements to the contrary. The Sisters had great difficulty placing these children with foster families. During the years the Sisters received British home children, they also continued to run their orphanage for local orphans.

Home children have become a major topic of research for genealogists. In 2013,  the Kingston branch of the Ontario Genealogical Society transcribed and published the home children registers of the House of Providence in order to make the records more accessible. The Home Children Records of the Sisters of Providence of St. Vincent de Paul Kingston 1888-1899 contains information on the eight groups of home children who arrived between 1888 and 1891, as well as those children subsequently returned to the Sisters of Providence Orphanage up until 1899. The publication is available for purchase for $8 from the Kingston Branch OGS.