Walking in Hope is a new book that chronicles the history of the Sisters of Providence of St. Vincent de Paul from 1961 – 2006. It was officially unveiled during Jubilee ceremonies in June. 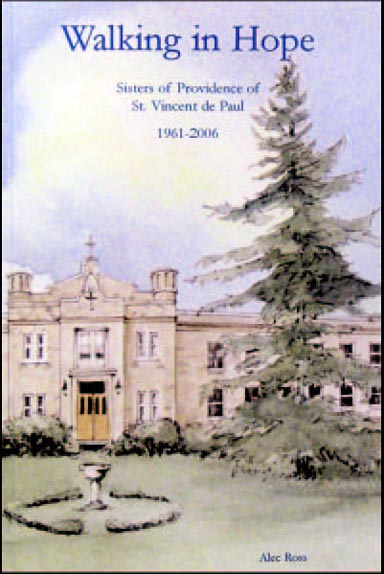 The manuscript for Chapter one was originally written by Sr. Muriel Gallagher who extensively researched the history of the congregation and provided the inspiration for the book. Chapter one was later edited by Kingston freelance author Alec Ross who researched and wrote the remainder of the book.

“On this 145th Anniversary of the foundation of the Sisters of Providence of St. Vincent de Paul in Kingston, Ontario, this history book is dedicated to all the valiant women of the congregation, from our pioneer Sisters to the present, who have lived the charism, mission and spirit of our Vincentian heritage and who have advocated for and ministered with the poor and most vulnerable of society.”

Alec Ross spent one year researching and writing Walking In Hope. His biggest challenge was learning Church history, specifically Vatican II and the development of congregations of women religious in early Ontario.

The opening chapter describes the founding of the Sisters of Providence in 1861.

“I came away in awe of Catherine McKinley (Mother Mary Edward),” says Alec Ross. “Her achievements in nurturing and growing the congregation are nothing less than remarkable.”

The author believes the Sisters’ greatest legacy will be their unwavering devotion to the congregational mission.

“I was constantly amazed at how, through their entire history and in the face of all sorts of momentous changes in the Church and in society, the congregation was able to adapt to the times while never really losing sight of the big picture, i.e. their Vincentian mission to serve the poor.”

500 copies of Walking In Hope were printed at Performance Printing based in Smiths Falls.