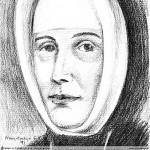 A key figure in the founding of the Sisters of Providence of St. Vincent de Paul was officially beatified by the Vatican on October 7, 2001.

The Blessed Mother Emilie Tavernier-Gamelin was the Canadian foundress of a Montreal religious order that in turn played a major role in establishing the Kingston-based Sisters of Providence of St. Vincent de Paul.

In December of 2000 Pope John Paul II signed a decree certifying that prayers to Mother Gamelin had resulted in the 1983 cure of a 13-year-old Quebec boy who was dying of leukemia. That step paves the way for Mother Gamelin’s beatification in Rome this fall.

It is a recognition that the Sisters of Providence of Montreal have long been looking forward to, and they have been diligent in supporting public recognition of Mother Gamelin’s legacy. In Kingston, the local congregation is also strongly in support of her beatification.

“As a woman of Providence, Mother Gamelin is our most important frame of reference,” says Sister Marian McCallum. “She is a model of compassion in what she did for the people of her society and she inspires us in what we are trying to do today in our time and place.”

Mother Gamelin is not considered the foundress of the Kingston order, which does not attribute its genesis to a single originator, a practice which differs from that of many Catholic religious congregations. Instead, the congregation views its founding as a process of history involving key people guided by a deep spirituality and passion for social justice. Mother Gamelin is one of those crucial figures in the community’s development.

As a young woman living in 19th century Montreal, she was devastated by the death of her husband and three children. Her spiritual director introduced her to the devotion of Our Mother of Sorrows and the young widow used this devotion not only to lighten her own suffering, but to reach out to the poor and the suffering of her city.

In the 1830s she opened a refuge for elderly and destitute women. Later, outbreaks of cholera and civil unrest led her and the women who worked by her side to begin ministries of nursing and visiting prisoners. The bishop of Montreal, Ignace Bourget, encouraged her efforts, helping to found a new Canadian apostolic religious congregation with Mother Gamelin serving as the first Superior and the “rule ” of St. Vincent de Paul as the official inspiration. The order officially began in March 1844 under the title Daughters of Charity, Servants of the Poor. The people of Montreal, however, called the community “The Sisters of Providence.”

The mid-19th century was also an especially difficult time for the poor of Kingston. Particularly afflicted were the aged and orphaned, who had nowhere to turn for help. To help alleviate their suffering, Kingston’s Bishop E.J. Horan, turned to the Montreal Sisters of Providence. On Dec. 13, 1861, four Sisters arrived in Kingston to found what is now known as the Sisters of Providence of St. Vincent de Paul. Five years later, when the founding Sisters returned to Montreal, they left behind Mother Gamelin’s legacy of caring and compassion. That legacy has endured for a century and a half, and the Kingston order remains inspired by Mother Gamelin’s dedication to the poor.

Find out more about Emilie Gamelin by visiting the website of the Sisters of Providence of Mother Joseph Province in Seattle, Wash.