The religious dress of the Sisters of Providence of St. Vincent de Paul has evolved over time. They started out wearing the habit of the Sisters of Providence from Montreal, then tried out an unsitable habit for a few years before switching to the distictive “lily” or “peak” headdress  they wore for over 80 years. In the 1950s they changed to a rounded headdress before trying out a  succession of modified habits inthe 1960s and 1970s, before leaving the choice of wearing the habit to individual sisters.

Please click on the photographs for a larger view and captions. The habit of the Sisters of Providence of Montreal was worn from 1861 to 1867. 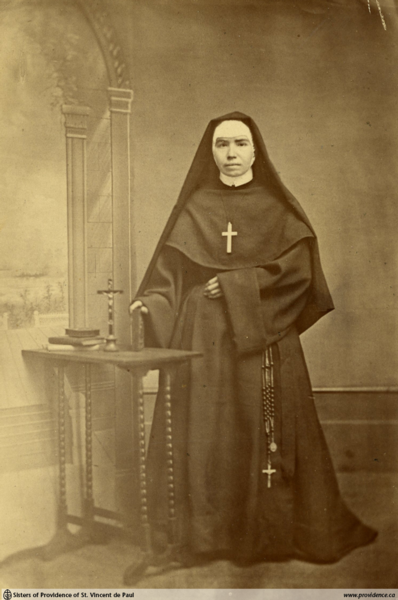 The Sisters chose a new headdress in 1872 and it was adopted by the congregation on November 10th, 1872. 1n 1933 the habit was shortened to walking length, and was no longer “hooked up”. The serge underskirt and pockets were no longer worn. A black cotton underskirt or half-slip with patch pockets replaced these. The Sisters of Providence of St. Vincent de Paul was made a Pontifical Institute in 1953. As part of this process, Rome required that the headdress be changed to make it less singular. The modified headdress was adopted on Holy Thursday, 1954. At the General Chapter deliberations in 1965 the habit was shortened to 4 inches from the floor and the outside sleeves and the Chaplet were removed.

As part of changes that came out of the Second Vatican Council, Rome requested that a modified headdress be adopted to leave the face uncovered. The Congregation adopted the new headdress at the beginning of 1967. Beige habits were given to those in Latin America. 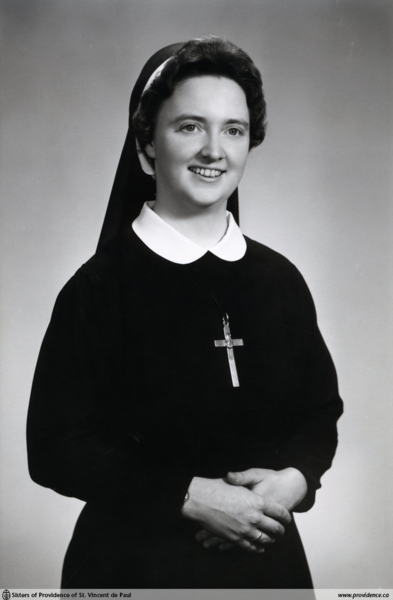 In 1969 a modified habit was adopted. Coloured habits of beige and blue were approved for the summer season. In 1971 coloured habits were allowed at all seasons. A smaller cross replaced the original pectoral cross. In 1977 the General Chapter approved habits of black, beige, blue and white. Sisters could decide to wear casual clothes on those occasions when the wearing of the habit would not be appropriate. In 1981 the General Chapter decided that the wearing of the habit would be left to the choice of the individual sister.