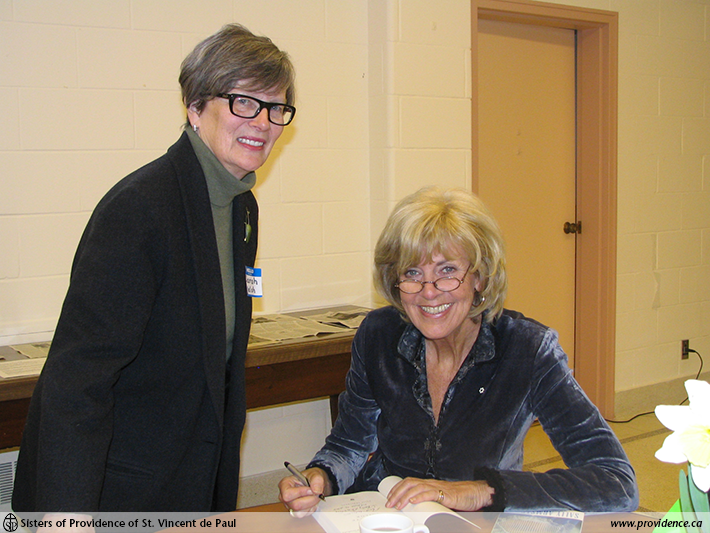 Sally Armstrong, seated, signs a copy of her book for Sarah Welsh, Electa Resource Centre librarian. The Resource Centre has copies of two books by the author – The nine lives of Charlotte Taylor: The first woman settler of the Miramichi and Veiled threat: The hidden power of the women of Afghanistan.

Sally Armstrong has been nicknamed Afghan Sally and the Crusading Journalist. The Amnesty International award winner and documentary filmmaker gave the keynote address at this year’s conference sponsored by the Healing Violence Against Women Committee of the Sisters of Providence.

Sally first began reporting on atrocities in Afghanistan 11 years ago and in that time, the experience taught her “if we can’t talk about it, we can’t change it.”

A self-confessed crusader, Sally believes her odyssey was set in motion years earlier when covering wars in Bosnia and Somalia where she witnessed the effects of conflict on women and children. Frustrated by the lack of interest from the West about her reports on gang rape camps, she learned first hand that the first casualty of war is truth.

During her keynote address in the Chapel at Providence Motherhouse, Sally was moved to tears when recalling the horrors she witnessed including the story of a young boy dying from starvation. The little boy, she referred to as a bag of bones, was the sole survivor of his family – the other 5 members were murdered by the Taliban. Near death, the little boy craned his head toward Sally and smiled. The human spirit was evident in that moment.

Sally Armstrong is a passionate woman who believes that despite the horror and despair of war, she sends this message of hope – “When women come together, they get things done. We are not about power, we are about policy.”

Sister Frances O’Brien was the chairperson of the March conference.

“Our committee was thrilled with Sally’s introduction to our conference. The 110 participants and 8 workshop presenters are now networked to spread the word about gender violence and how we can take action. Sally named this a moral imperative. Hopefully we will all continue to find ways to bring gender violence out of the shadow.” said Sr. Frances.