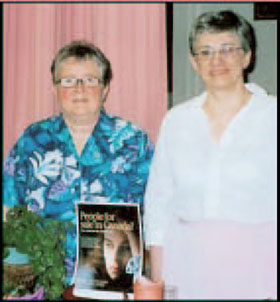 Reprinted with permission from the Western Catholic Reporter.

Sister of Providence Frances O’Brien and Associate Barbara Baker facilitated a workshop to examine the world-wide reality of human trafficking at the spring assembly of the religious women of the Archdiocese of Edmonton at the Providence Renewal Centre.

This issue is one of the priorities of the CRC (Canadian Religious Conference).

The facilitators outlined some of the more common forms of this problem today such as the luring or abduction and subsequent sale of women and children around the world for domestic service such as nannies, sweat-shop workers, mail-order brides, forced prostitution and the “entertainment industry” such as exotic dancers.

Many of these young women are promised employment opportunities that would allow them to prosper and to support their families at home. Instead, they are forced into prostitution.

An upcoming concern is the expected trafficking of women for the sex-trade industry expected to surround the Vancouver 2010 Olympic Games. Many of these young women are promised employment opportunities that would allow them to prosper.

This information was received with concern by the 80 or so participants at the May 11-12 meeting, which included lay women, as well as David Bouchard, the representative of the CRC (Alberta/B.C.), and Julien Hammond, director of pastoral services of the archdiocese.

Sister Norma Johnson, a Sister of Our Lady of Charity who has experience working in this area, commented on how the problem is present and flourishing in Canada.

The action plan established over the two days to address this issue is as follows:

The assembly was considered to be a success and many looked forward to participating in the upcoming forum on Preventing Human Trafficking, Oct. 12-14, in Red Deer.