A rematriation ceremony was the culmination of 20 years of the Sisters’ commitment to saving heirloom seed varieties. This is not the end of the story of the seeds, only a new beginning in new homes as it once had been when the seeds moved in with the Sisters.

The Sisters of Providence of St. Vincent de Paul saw the needs of the time in the early 1990’s and through discernment during a Chapter decided to include a focus on ecology, eco-feminism and eco-spirituality in ensuing years. This eventually led to a partnership with Carol and Robert Mouck who had been operating Foxfire Farm in Napanee, growing and saving open pollinated heirloom seed varieties.

Sister Jeannette Filthaut, a member of the Leadership Team at the time, brought forth the ideas of an Ecology committee, a greenhouse and a home for the seeds the Sisters were beginning to save. Sister Jeannette expressed that the “Ecology committee was a great committee to work with and it was truly an enriching experience to see our Sisters gathered in prayer around the first garden we initiated near the gazebo with seeds from the Moucks.”

The Moucks brought many varieties of seeds to the grounds of Providence Motherhouse and in 1999 the Sisters established the Heirloom Seed Sanctuary as a new home for the seeds grown on the property. The partnership allowed the Sisters to share the lives of the seeds with the local and wider community by hosting annual heirloom tomato tasting events, seed saving workshops, and seasonal celebrations.

Sister Shirley Morris believes, “it is all about connecting food with health, joy, justice and nature, and this also connects with our Mission which calls us to preserve the rich heritage of seeds and species.” Sister Shirley has been a key figure in the Heirloom Seed Sanctuary and has helped in many aspects of the ministry since the turn of the century. 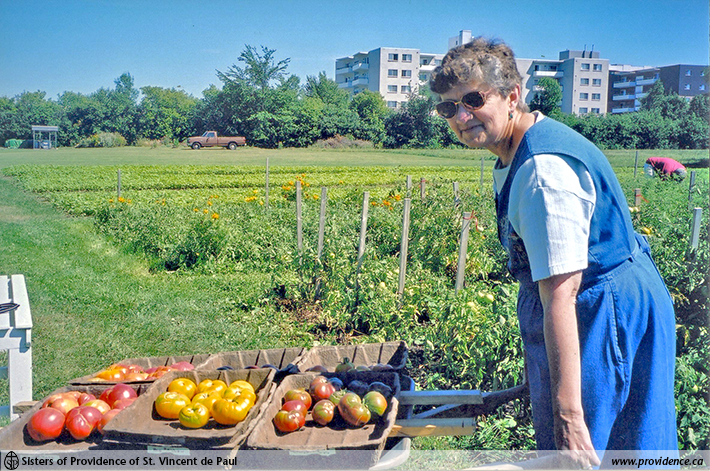 In 2008, Cate Henderson was hired by the Sisters to be mentored by Robert and Carol, and to take over care of the Heirloom Seed Sanctuary upon the Moucks’ retirement. Cate learned the seed saving techniques of the Moucks but also experienced the spiritual connection the Sisters shared with the seeds through this ministry. Working with various organizations, the Heirloom Seed Sanctuary ministry was brought to many people of different generations; children in local schools through seed saving projects and school gardens; young adults through displays, presentations and internships; and to adults of varying ages through workshops, garden tours, and volunteer opportunities. Inspired by the work of the Heirloom Seed Sanctuary, numerous volunteers from the local community donated countless hours of time to this hope-filled ministry.

The Heirloom Seed Sanctuary received the Canadian Environmental Silver Award in the Sustainable Living Category in 2008, and was nominated for other sustainability awards over the years.

CHANGING OF THE TIMES

As urban gardening and local food movements increased, the needs of the times changed. The Sisters were discerning walking a new path in hope. In 2015 the Sisters announced plans to transform their land into a hub of compassionate services that will fulfill needs in the community. They named this hub ‘Providence Village’.

Trusting in Providence to guide them, plans were set in motion. These new plans for the property meant that the heirloom seeds also needed to start a new journey. Through the many connections of the Heirloom Seed Sanctuary ministry, new homes were found with Ratinenhayen:thos of the Tyendinaga Mohawk community, and the Kingston Area Seed System Initiative (KASSI) of which Cate Henderson is a founding member.

“Visioning possibilities is always a journey that takes its own life when the seeds we nurture are provided with room to grow. I am most grateful that I had an opportunity to be a part of this journey,” said Sister Jeannette Filthaut.

Preparations were made and a ceremony to officially transfer care of the seeds to their new homes was planned. 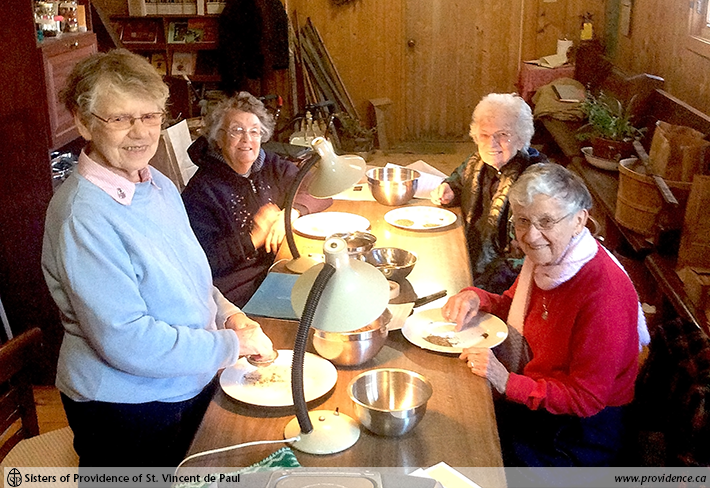 Members of Ratinenhayen:thos and KASSI joined Sisters, staff, volunteers, and friends of the Heirloom Seed Sanctuary at the Heirloom Seed Rematriation Ceremony held at Providence Motherhouse on Earth day, April 22, 2019.

Sister Sandra Shannon opened the ceremony with her memory from 20 years ago of the meeting with Robert and Carol Mouck where they introduced the seeds and trusted the Sisters would give them a good home. She continued, “we have confidence that the seeds have found, once again, good homes in which they will be treasured for the future. And it is with pleasure that we pledge to pass these seeds on to these two organizations.”

Cate Henderson and Sister Shirley Morris gave a history of the seeds in the care of the Sisters of Providence and acknowledged the many facets of the Heirloom Seed Sanctuary ministry and the many people who were involved with and influenced by this ministry.

Each group had also prepared different ways of honouring the Sisters who were passing on care of the seeds, the partners in the continuing journey of the seeds, and most importantly the seeds themselves. Baskets of token seeds, seed documents and other items were presented to each of the partner groups taking over care of the seeds. Members of each of the three communities in attendance gathered for a photo at the conclusion of the ceremony before enjoying the organic and traditional food prepared by the Motherhouse kitchen.

Over the years many Sisters contributed to the ministry in many different ways. Normal gardening processes of planting seeds and caring for them in the greenhouse and the gardens until harvesting; seed saving processes of cleaning, sorting, cataloguing and storing for future seasons; educational processes of participating in environmental events, hosting workshops and tours, and sponsoring like-minded seed saving organizations; functional processes of guiding the Heirloom Seed Sanctuary through committees and developing partnerships; and spiritual processes by focusing on our connections to the Earth and all living beings in all of the ministry work and especially the seasonal celebrations. The Sisters who have been involved with this ministry are too numerous to name individually but you know your contributions, as do the seeds who will carry on their memory to future generations. 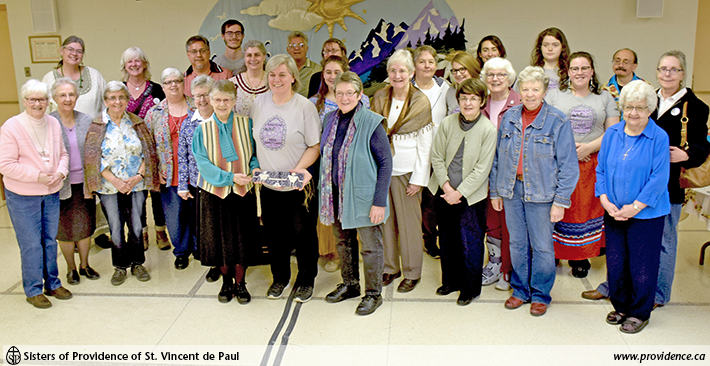 Sisters of Providence and members of Ratinenhayen:thos and KASSI in attendance at the rematriation ceremony.