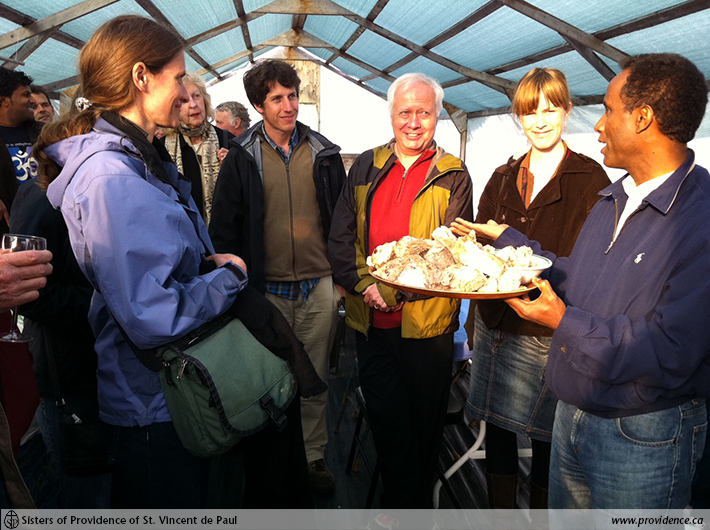 Cate Henderson, far left, shares a meal with other participants. It was served in the greenhouse of Ottawa seed grower Greta Kryger of Greta’s Organic Gardens

On May 6th and 7th, 2011, an event of historic importance occurred in Ottawa, when 23 participants from Canada joined together to try to make this great country of ours seed and food secure again.

As a representative of the Heirloom Seed Sanctuary of the Sisters of Providence of St. Vincent de Paul, I was one of only two seed sanctuaries represented the table; the only two that exist in Canada.

The Sisters’ committed stewardship of 300 different varieties of seeds is one of the most important models Canada has for creating locally-adapted, ecologically-grown, educational seed saving facilities across the country. The participants emphasized that seed sanctuaries must be farmer-driven, non-profit, and publicly-owned. A national Canadian Seed-Saving initiative is now afoot.

“This conversation, particularly about existing seed work and future possibilities, would be a critical first step in the building of a pan-Canadian applied seed action network and/or program,” said Kate Green of USC Canada, a non-profit international development organization.

On behalf of the Heirloom Seed Sanctuary, I offered thanks to USC Canada and colleagues for organizing this important event. The Sisters look forward to helping ensure a food and seed-secure Canada.

“While locally adapted seeds are better suited to ever shifting growing conditions — and thus insurance for the future — most growers of organic vegetables and grains in Canada are forced to purchase seed from the US, Europe or even farther afield. Canada simply lacks the supply. And the supply that exists is under threat both from industrial seed contamination and increasingly unpredictable and extreme weather patterns. There is, in short, an urgent need to build a more sustainable, biodiversity-based seed supply in Canada, outside the large-scale industrial system.”
— Kate Green, USC Canada

FACTS:
According to Seeds of Diversity Canada:
75% of food biodiversity has become extinct in the past 100 years
60% of the remaining crop plants are inadequately conserved and studied.