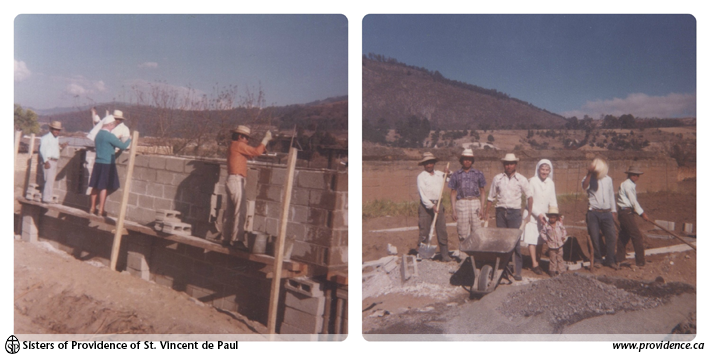 The Call for Missions in South America

The first four Sisters missioned to Guatemala arrived in Guatemala City on December 9, 1967 where they were met by Bishop Manresa of the Diocese of Quezaltenango. The Sisters, two teachers and two nurses, spent several days in Gauatemala City, before heading to Quezaltenango for a week. On Sunday December 17, 1967 the Sisters were driven in a decorated motorcade through streets lined with waving parishioners to San Cristobal where they were officially welcomed to the home of their new mission. San Cristobal, in the Totonicapan Department of Guatemala, is seven miles from Quezaltenango and is a village in the pine covered mountains of the Sierra Madre Range. In 1967 the parish of San Cristobal had about 40,000 people living in the village and the nine surrounding rural communities, known as “cantones”.  Some of the cantones were very isolated and difficult to visit. The people of the parish were a mixture of Maya Indians and Spanish. Most of the population was illiterate and very poor. 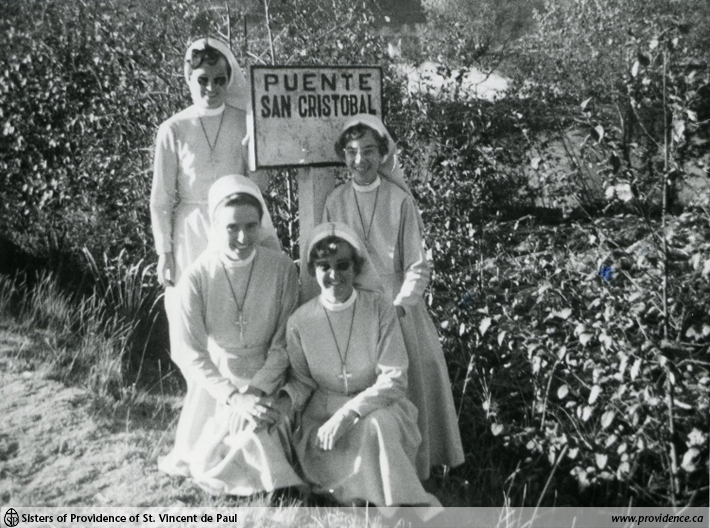 Sisters standing by a sign for the San Cristobal bridge shortly after their arrival in 1967. Back left to right: Sr. Rose Marie Bokenfohr and Sr. Winnifred Callary; Front left to right: Sr. Julia Hamilton and Sr. Irene MacDonell. (SPSVPA 014-207.3.1-36) 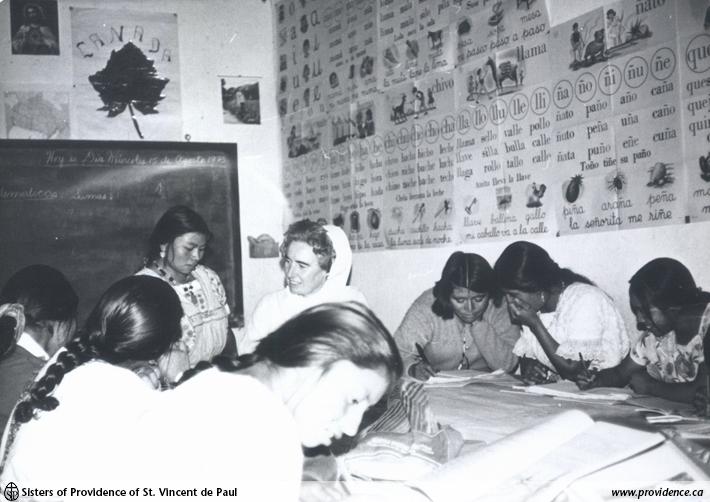 In January 1972 the General Superior visited the mission in San Cristobal and described the Sisters’ work: “Over eight thousand patients were treated in the past year in the clinics in the town and in those of the four cantones to which the Sisters go on a regular basis. His Excellency, Bishop Manresa and the local pastor, Reverend Father Bruno Frison both expressed great appreciation for the work the Sisters are doing. This includes, in addition to helping the sick, classes in alfabetizacion, assisting in the training of catechists, teaching catechism, music, sewing and English, and inculcating better health practices.”

The Sisters of Providence of St. Vincent de Paul’s withdrew from their ministry in San Cristobal in February 2003 and the work was passed on to the Sisters at Mater Orphanorum Institute in Guatemala. 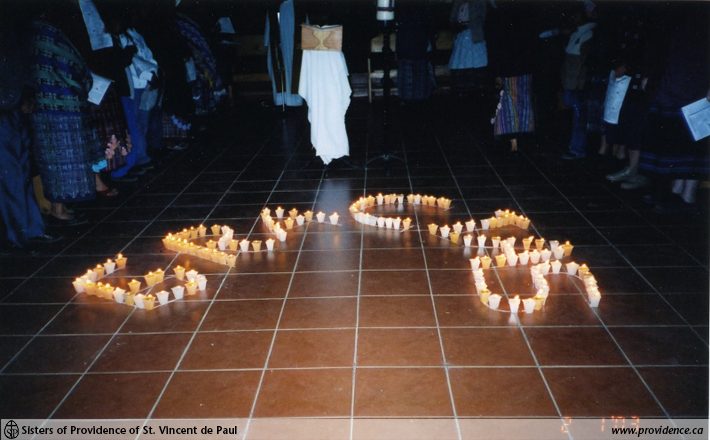 The word Gracias is spelt out in candles as part of the vigil service marking the closing of the Sisters of Providence’s mission in San Cristobal in February 2003. (SPSVPA 014-207.3.1-283) 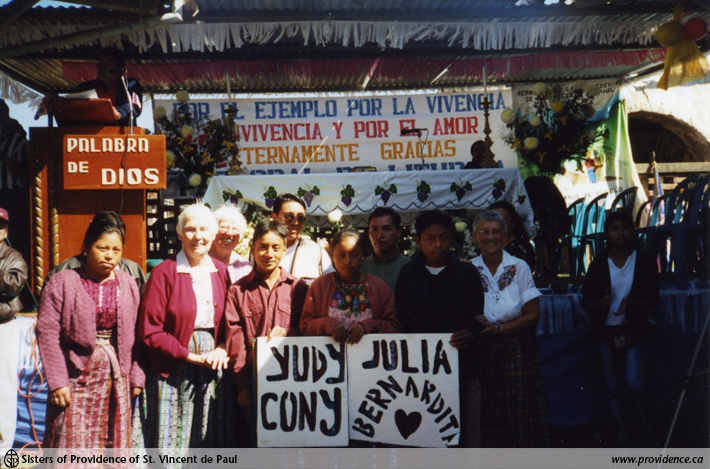 Sr. Julia Hamilton, Sr. Mary Bernadette and Sr. Connie Kaufman with locals in the old market of San Cristobal at the farewell celebrations when the Sisters of Providence closed their mission in San Cristobal in February 2003. (SPSVPA 014-207.3.1-341)

In December 1970, the Sisters of Providence of St. Vincent de Paul expanded their ministry in Guatemala to Momostenango, a town fairly close to San Cristobal. The Sisters’ mission focused on delivering health care through weekly clinics in the town and the surrounding cantones, and on teaching religion and sacramental preparation. The Sisters’ ministry in Momostenango came to an end in March 1999. 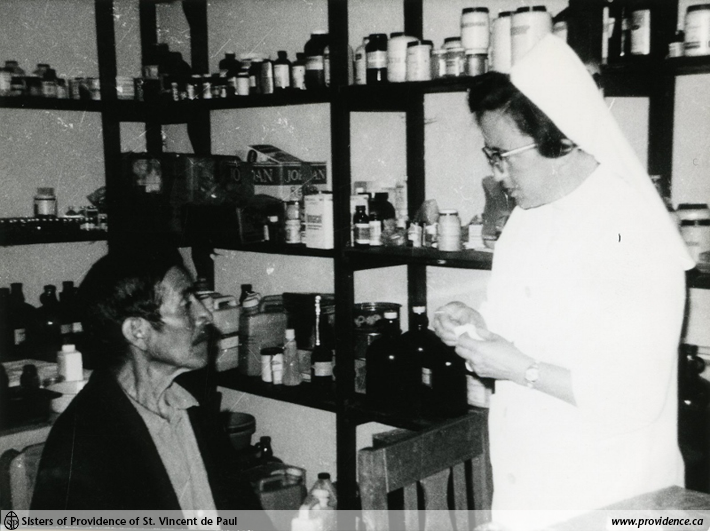 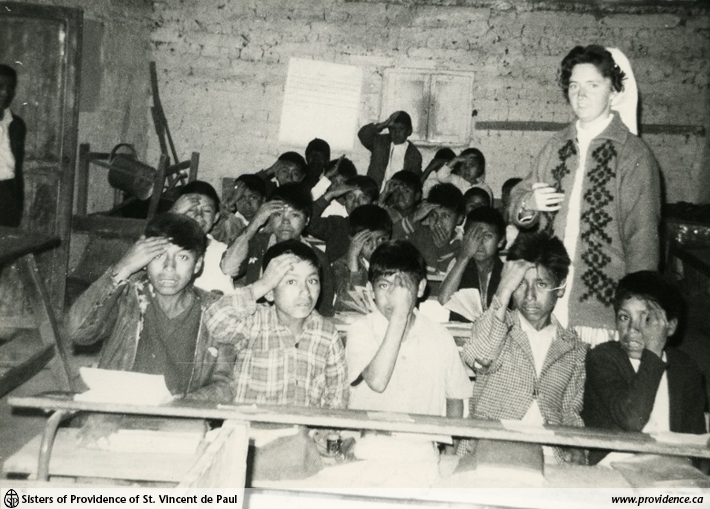 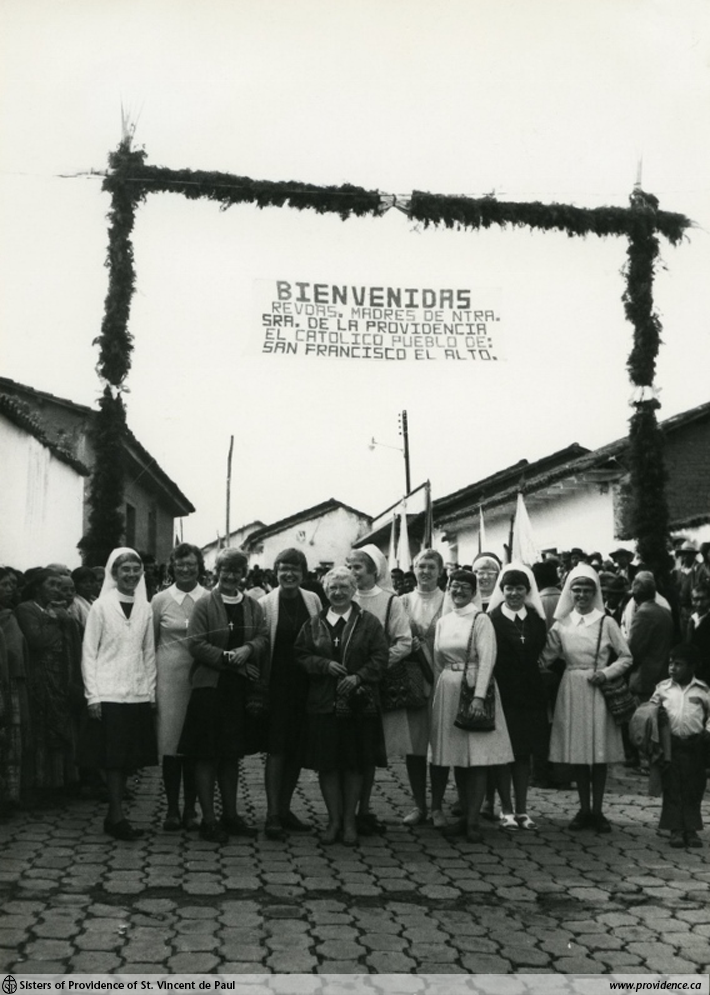 In 1977 some local Guatemalan women expressed interest in religious life consequently the Sisters of Providence of St. Vincent de Paul opened a House of Formation in San Francisco el Alto in 1979. The house closed in 1981 when it was decided that the local women should be directed to a Guatemalan congregation. The Sisters missioned to San Francisco el Alto were redirected to work in San Cristobal and Momostenango.

While the Sisters were living in San Francisco el Alto a group of lay people bonded together to perform works of charity with the Sisters. In 1983 Sr. Muriel Gallagher, the General Superior, suggested that the Sisters form a pilot project of Providence Associates. The Sisters, living in San Cristobal, invited the group of lay people from San Francisco el Alto to form an Associate group. They met for the first time in May 1983 and at monthly meetings learned about the spirit and Charism of the congregation. The first 17 Socios made commitment as Providence Associates on September 28, 1985. The San Francisco El Alto Associate group remained active until 2014. 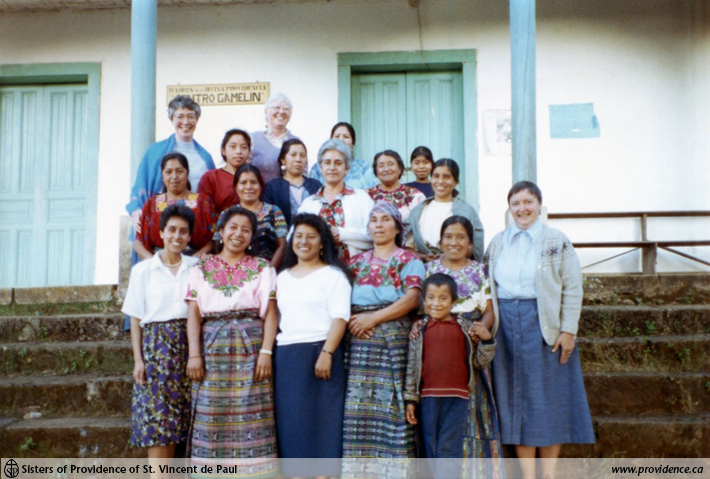