The Sisters of Providence of St. Vincent de Paul began their ministry in Peru in 1967. The congregation continues to have an active presence in Peru.

The Call for Missions in South America

In 1966, Pope Paul VI requested that religious congregations in Canada assist with missionary work in Latin American countries. The Sisters of Providence of St. Vincent de Paul felt called to answer this call and in January 1967 two Sisters visited Guatemala, Peru and Chile to determine where to establish a new mission.

When the Sisters were visiting Peru they met two young priests from the Archdiocese of Edmonton who were attending language school in Lima and were about to establish a mission in the shanty towns on the outskirts of Lima. In the 1960s 30,000 people from the mountains in Peru migrated to the desert areas on the outskirts of Lima, taking over the barren land and building reed huts, known as barriadas, in the face of opposition from the government. The priests and the Archbishop of Edmonton asked the Sisters to work with them in their ministry and the Sisters agreed to help. As a result of their visit to South America the Sisters were “convinced that [their] generosity must stretch beyond the limits originally planned, and after discussing the matter the Council [they] decided to open two missions rather than one.” The Sisters established foreign missions in San Cristobal, Guatemala and El Progreso, Lima, Peru. 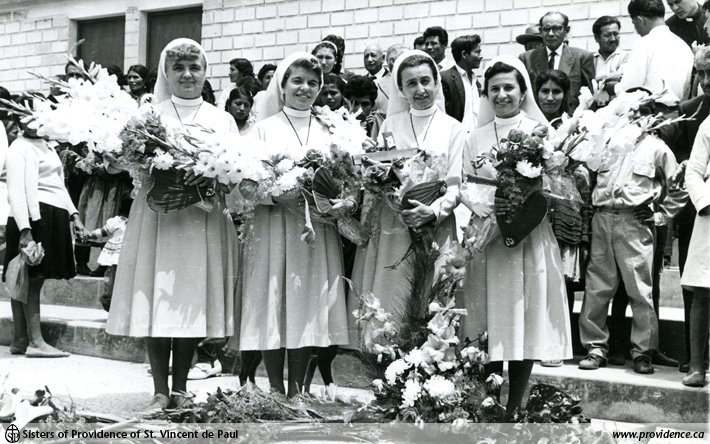 Sister Rose Healy (Sister Mary Immaculate), Sister Shirley Morris (Sister Mary Patricia), Sister Rita Moran (Sister Anna Rita) and Sister Josephine Doiron (Sister Mary Francis), the first four sisters missioned to Peru, arrived in Lima on December 9th, 1967. They were met by Fr. A. MacDonnell and Fr. Amadyk, the Edmonton priests. The next day they were welcomed to their new home, El Progreso in the Carabayllo District of the Province of Lima by the people of the barriadas. Carabayllo is considered to be one of Lima’s poorest districts and is situated in the North Eastern part of the province. When the Sisters arrived in El Progreso it was a shanty town, with no basic services such as water, sanitation, electricity and paved roads.

In February 1968 the General Superior traveled to Peru to visit the Sisters in their new mission. Mother Superior wrote “We saw quite an improvement in the “barriado”. A large number of the bamboo shacks have been replaced by small brick houses. These have no floors or windows, though there is the occasional exception. The scene is very desolate, and the people are terribly poor … The Sisters are visiting the houses each day, helping and comforting the sick, winning the trust and love of the people. They are accompanying the Fathers when they conduct study sessions, and will soon be prepared to undertake some of this work themselves. “

The Sisters originally lived in a convent built for them as part of the Edmonton Mission. After a few years they felt that the convent was too large for their purposes while the people around them had so little. In 1972 the Sisters in Peru renovated the convent, moving into a smaller section of it and converting the larger wing into a church for the people of El Progreso. By 1980 the Sisters again felt that they had too much compared to the poor around them and the convent would better serve the people as a retreat centre. In November 1980 the sisters moved into a smaller house located side by side with houses belonging to the people of the parish and in March 1981 the convent was inaugurated as the “Msgr. Oscar Romero Retreat Centre”.

Since 1967 the Sisters of Providence have been involved in religious instruction, training catechists, the Christian Workers Movement, providing health care and mental health services to the poor and marginalized, parish ministry, education, and aiding the impoverished people of Peru in any way they can. The sisters currently continue their ministry in El Progreso. 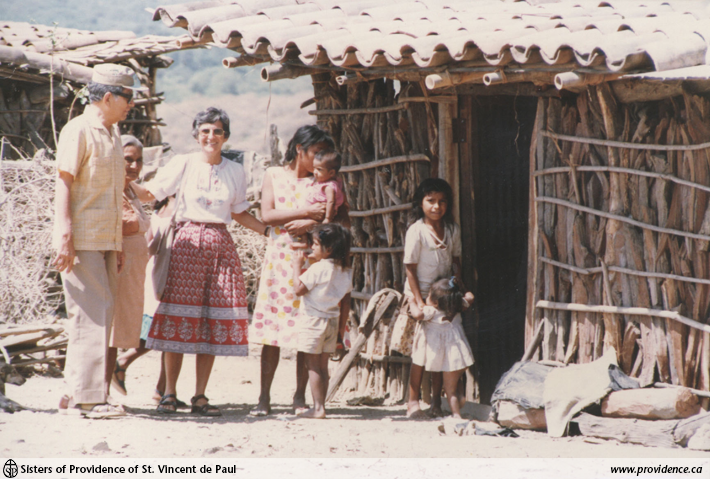 Sr. Josephine Doiron and Deacon Jorge Lozada visiting a Peruvian family in Balcones, Chulucanas in December 1984. They are standing by a tabique house. Tabique homes are rectangular and are built using sticks wedged between cross sticks. (SPSVPA 014-216.4.2-13)

The sisters’ ministry also involved regularly visiting several rural villages. This work involved helping the locals improve their quality of life as well as their spiritual lives. In 1984 Sr. Josephine helped the people of the rural village of Balcones to build a well, a reserve tank and provided them with a water pump.

The Sisters of Providence of St. Vincent de Paul served the people of Chulucanas and its outlying rural villages with dedication for ten years before this ministry came to an end in 1985. 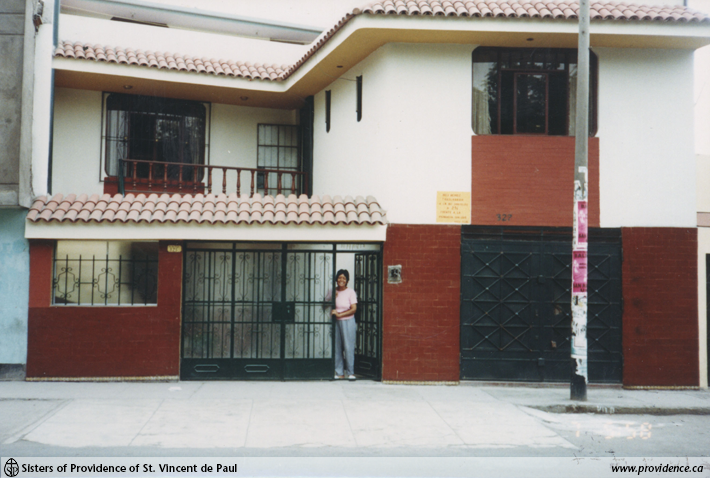 In 1995 the Sisters of Providence of St. Vincent de Paul began a novitiate formation program in Peru. Between 1995 and 1998 the sisters and the women in formation lived together in one house. In 1998, the sisters opened a house in San Felipe in the Comas district of the Province of Lima to accommodate those involved in the Peruvian Novitiate Formation Program. San Felipe is located closer to Lima then El Progreso, which made it easier for the novices to travel into the city for an inter-congregational formation program. Sister Sara Jimenez Angulo, who was the first Peruvian candidate, took her perpetual vows December 13, 2000. She became director of the Formation program in Peru in 2002. Formation House was closed in 2011 and the sisters living there moved back to El Progreso and onto other ministries. 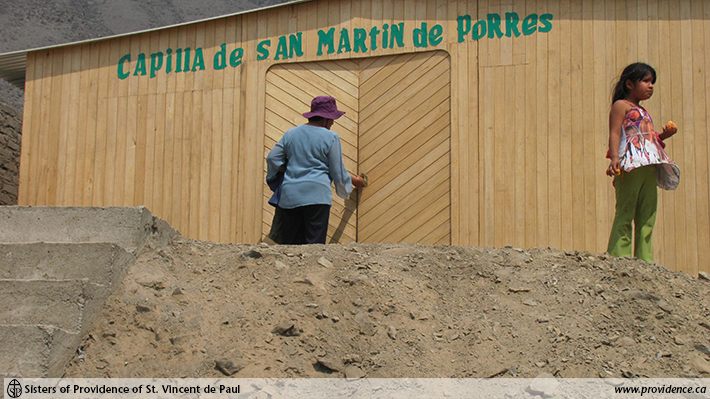 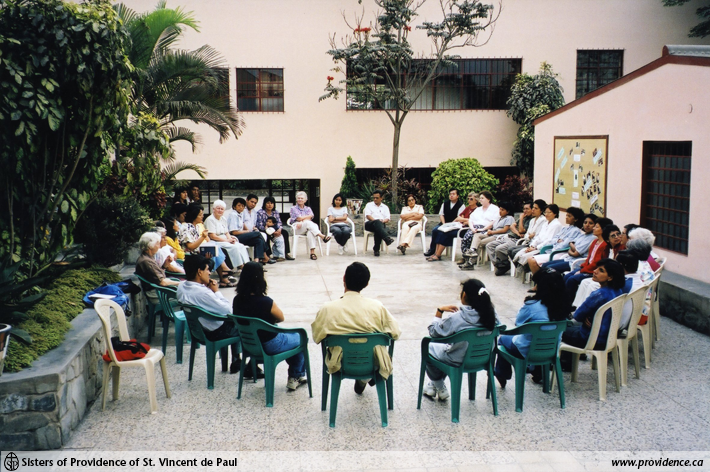 In 1991 a group of men and women, who had been working in close collaboration with the Sisters for years, formally asked to become Providence Associates. Their request was granted and the associate formation process began. On January 20, 1992 five persons made their commitment as the first Peruvian Associates. Over the years the number of Peruvian Associates has greatly increased. They meet monthly and each person tries to live their commitment as a disciple of Christ at work, with organizations, in the parish and at home.