The Sisters of Providence of St. Vincent de Paul served in Prescott, Ontario from 1905 to 1987. 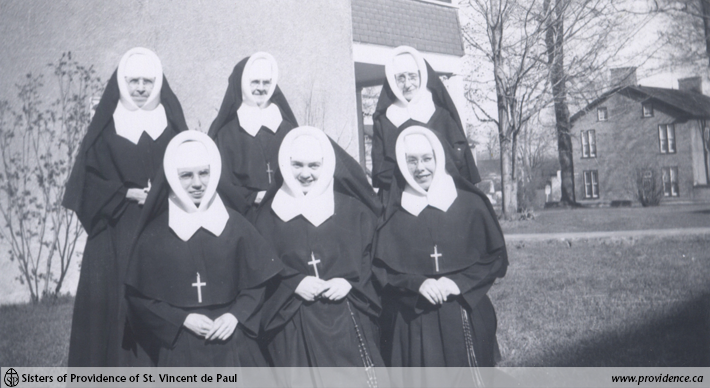 In 1905 the Pastor of St. Mark’s Parish in Prescott, Monsignor Masterson, asked the Sisters of Providence to found a mission teaching at the separate school. Responding to his request, two Sisters arrived in Prescott in August 1905 to prepare the large beautiful house purchased by the diocese for them. The house had been the residence of Doctor Buckley and his wife Margaret.  After the death of the doctor, Margaret Buckley sold the house to the Archdiocese. Later this same woman, willed an amount of money corresponding to the price of the house, to the Sisters to be used for its maintenance and upkeep. By September the house was ready and seven Sisters came to live there: Sister Mary Francis, superior, Sr. Mary Ambrose, housekeeper, Sr. Mary Agnes, music teacher, and four teachers, Sisters Mary Andrew, Mary Ursula, Mary Francis Xavier and Mary Carmel. The formal opening of the convent was on Oct. 6, 1905 with much pomp and grandeur, there being an Archbishop and a Bishop as well as priests and deacons, taking part in the blessing!

Soon after arriving in the Fall of 1905 the Sisters took over the Separate School which had been constructed in 1875 as a two story brick building. Within a year the students were achieving outstanding results in the provincial entrance exams.  For the first time a separate school student received a silver medal and the next year students won silver and gold in the county.    The school continued to thrive and produce outstanding results much to the joy and pride of the Catholic community. In 1956 the old school was demolished and replaced with a new one which was later expanded as the number of students increased. By 1960 it was necessary to build a second school, St. Joseph’s, to relieve the overcrowding at St. Mark’s. Sisters continued to teach at St. Mark’s school with one of them always being the principal until Sister Catherine Cannon, the last Sister in the school, retired as principal in 1989. There was a Sister Principal at St. Joseph’s from 1960 to 1972.

The music teacher taught from a music studio in the convent and contributed much to the financial wellbeing of the mission. The income derived from private music lessons was very important as the sisters’ teaching salaries were very low. The music teacher also trained children’s choirs in the school, and adult choirs in the church, all the time acting as church organist, conducting folk groups and fulfilling the roll of sacristan.

During the flu epidemic of 1918 the schools and the churches were closed for a whole month from Oct. 16 to Nov. 11. Many people refused to care for the sick poor because of their fear of the disease.  At the request of the parish priest, two Sisters went to Morrisburg and cared for the sick in their homes during this time. An account of their care is recorded with great admiration and amazement, in the Morrisburg paper, “The Leader”.  Their return coincided with the end of the war which brought great relief and joy to the people in the town. 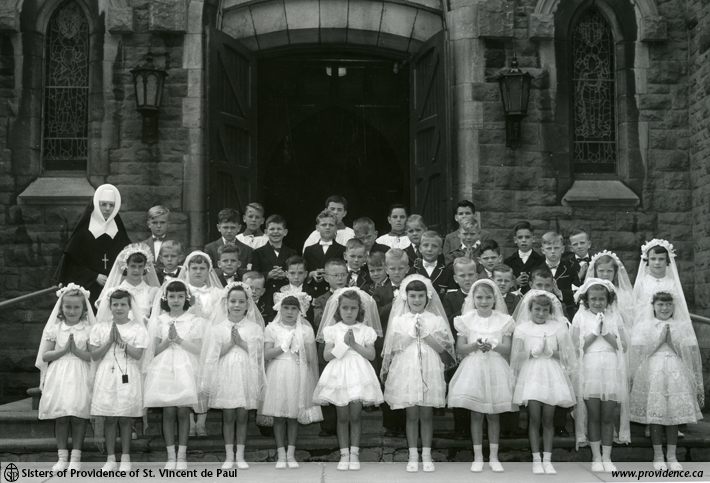 With only one Sister left at the end of the school term in 1987, the convent was given over for the use of the Knights of Columbus and Sister moved into an apartment until she retired from teaching in June, 1989. The farewell of the last sister in Prescott marked the end of an era for the Sisters of Providence. The parish priest summarized the contributions of the Sisters to Prescott over the years when he said that the parish community was richer for their presence and pointed out how much they had helped the community spiritually, educationally and culturally.