The Sisters of Providence of St. Vincent de Paul taught at St. Carthagh’s School in Tweed from 1917 to 1987 and were involved in parish ministry and teaching music from 1917 to 1999. 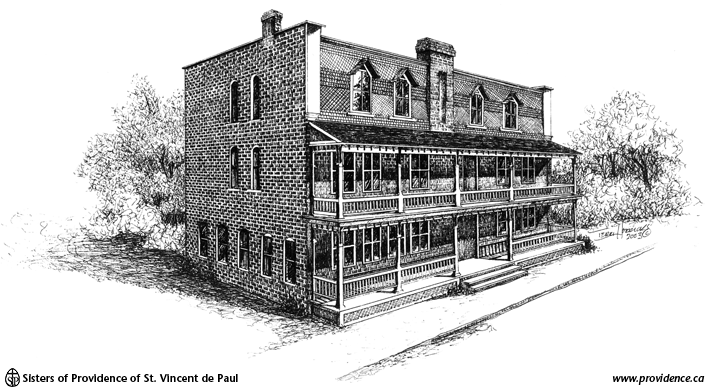 There are not many men left here. The village itself is not so bad, but we have to attend to the people outside. As the patients died I had them buried on their own farms, or with few exceptions where they were near the cemeteries. In this way I tried to confine the disease as much as possible. We have now two good Sisters here from Kingston doing noble service. I must also state that Anson Canniff has given his new and fine house to the Sisters for a hospital and he remains with them.

These common epidemics were not only devastating to rural areas within Hastings County, but also to larger communities like Tweed. In 1884 the pastor Father John P. Fleming asked for Sisters of Providence’s assistance during a smallpox epidemic in his parish. From November 8 to January 1st 1885, over a period of six weeks the Sisters of Providence set up a temporary hospital in Madoc and Tweed to attend those stricken with the disease, including Rev. Fleming. In total, eight Sisters aided in the nursing and recovery within the town. Through these large and often forgotten small acts of charity, the Sisters of Providence gained familiarity and connections to the community of Tweed. 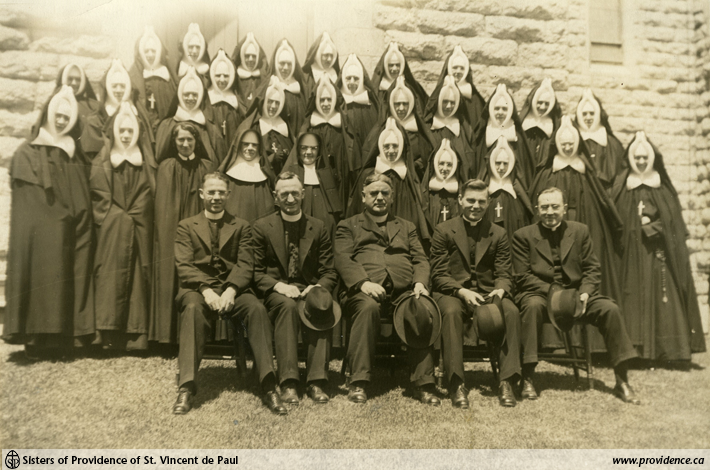 From this relationship grew a teaching mission based upon the request of the pastor Father John S. Quinn who asked the Sisters of Providence to take charge of the Separate School in Tweed. On September 8 1917, the Sisters of Providence sent Sister Mary Andrew as superior and teacher of the primary class, Sister Mary Theodora, housekeeper and Sister Mary Hildegarde music teacher to open the teaching mission in Tweed.  They were accompanied by Rev. Mother Mary Francis Regis, Superior General, and her companion Sister Mary Colomba. The Sisters’ arrival in Tweed is described in the annals:

Upon the arrival of the Sisters at their destination on Friday afternoon, three o’clock, Rev. Father Quinn, as each sister stepped from the train, extended a cordial welcome, and then Mrs. McConn proceeded to introduce the Sisters to some of the ladies at the station, the crowd being so great it was impossible to meet all. The Sisters were then conveyed to the convent in autos, the ladies of the parish accompanying them in cars forming a sort of procession.

A great surprise awaited the Sisters at the convent, as the building, about which Father Quinn had always spoken so humbly had been transformed from a hotel into a very beautiful residence. New hardwood floors, highly polished had been put in the front part of the building, and all the rooms excepting two which were not in need, painted and papered. It certainly looked most inviting, although not more than the good things which were awaiting them in the refectory. Mrs. McCann and Mrs. James Quinn served at the table. 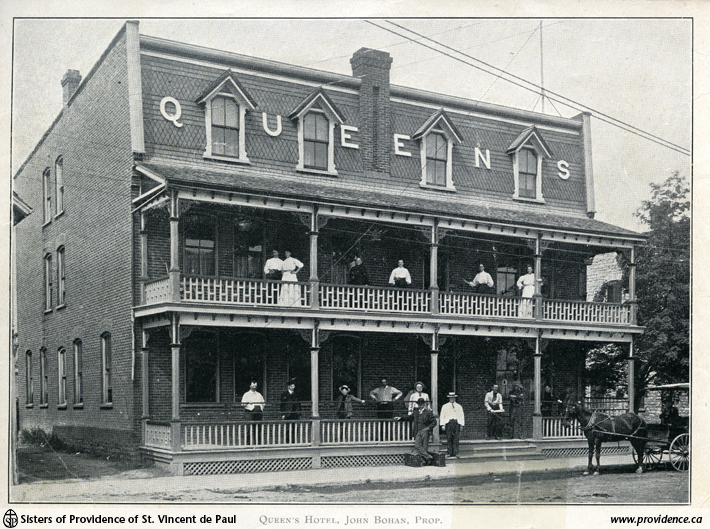 Built in 1890s, St. Carthage’s convent building operated as the site of a hotel under different proprietors and names, including the Queen’s Inn. (SPSVPA 014-220.2.1-1)

In 1939, the decision was made to construct a new school in order to meet increasing educational demands in a centralized location. During the construction of the new school, arrangements were made to conduct all classes out of the convent. According to the annals, in October 1939 the convent transformed itself into a temporary school with, “the chapel and parlour converted into a class room for grades 4, 5, 6 and grades 7 and 8 were accommodated in …[a] room on the top floor.” These cramped accommodations lasted until March of 1940 when all classes were moved to the new school. This left the convent classroom empty for the first time since 1917. 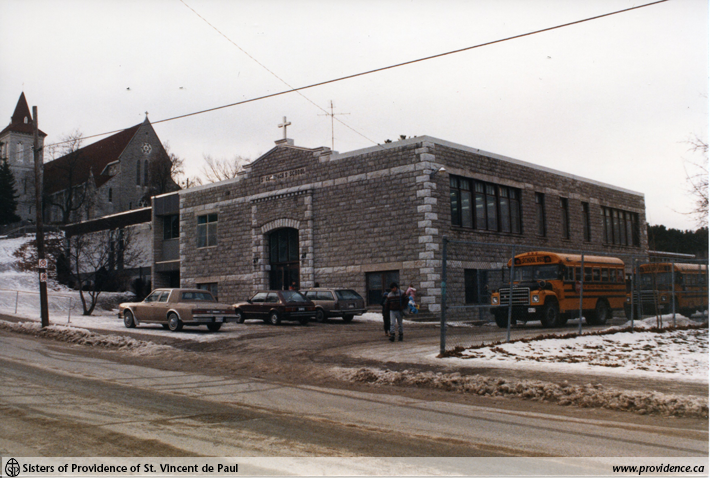 The official opening and formal blessing of St. Carthagh’s Separate School took place on May 23, 1940. During the opening, the Minister of Education, Hon. Dr. L. J. Simpson, stated the importance of this new school as form of protection for “Canadian democracy” in face of World War 2 as, “a great responsibility has been placed upon the teachers who must train the boys and girls to take charge of affairs after this war is over.” The new two-storey structure was built to match increasing school standards with an auditorium which could fit four hundred and fifty people, new household science and shop departments for technical training, a library, and a spacious playground.

In 1967, the Sisters of Providence celebrated their fifty years of service in Tweed. Former students, local parish, civic and political leaders held a series of open houses, receptions and banquets to mark the anniversary of their mission. In this way, the community of Tweed celebrated the teaching achievements of the Sisters of Providence. Over the course of 86 years, many Sisters served in the field of education within Tweed with as many as eight residing in the convent at one time while teaching at the St. Carthagh’s School and in their off-hours assisting with parish and community activities. The last Sister to teach at St. Carthagh’s School, Sr. Patricia Amyot, left at the end of the school year in 1987. 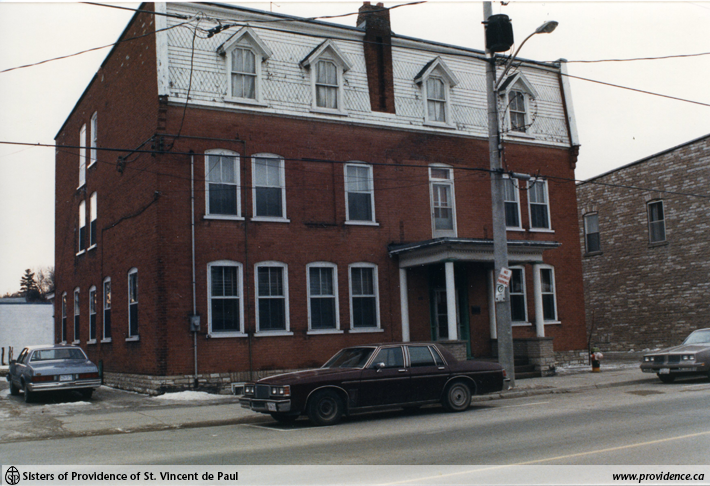 On November 29 1991, the two remaining Sisters of Providence in Tweed, Sister Mary Clement and Sister Isobel Oatway vacated St. Carthagh’s Convent and moved to a bungalow. The convent, which had been home to the Sisters for 75 years, was sold and turned into a Bed and Breakfast. The Sisters of Providence remained involved in the Tweed community from 1991 to 1999. During this period, Music teacher Sister Isobel Oatway continued teaching piano and music theory to all grades, while Sister Mary Clement was involved in parish ministry. The last sister in Tweed retired to the Motherhouse in Kingston in January 1999.

Over the course of 81 years, eighty-seven Sisters of Providence of St. Vincent de Paul served in Tweed and approximately thirty women from Tweed, Stoco and Bogart became Sisters themselves.

Sisters who served in Tweed

List of Sisters of Providence of St. Vincent de Paul who served from 1917 to 1999 in Tweed, Ontario by school year.