Once the home of Canada’s first prime minister and now the nerve centre of the only religious congregation founded in Kingston, the property known as “Heathfield” has a long and proud history.

The original villa, built in the 1830s, was described in this May 7, 1842, Chronicle and Gazette ad: “To be sold or let to an improving Tenant, the House at present occupied by the Subscriber together with 8 or 10 Acres of superior Land, being part of Lot no. 19; and about one mile and a quarter from Town. There has lately been expended on the House and Premises a considerable sum of money, making it to consist of a large Cellar, with a well of the very best Water, the first floor, Drawing, Dining and Breakfast Rooms, Kitchens, two Servants’ Bedrooms, Butlers’ and Cooks’ Pantries, with a well-arranged Water Closet; the second floor, Four Bed Rooms, one Dressing and Two House Closets all of which are heated by a single Stove; the offices are Stable, Coach House, Wood Shed and Summer Kitchen. Terms of payment will be made to accommodate a purchaser.” 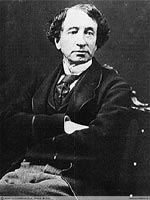 Prime Minister, Sir John A. Macdonald rented Heathfield as a home for his sister Louisa.

The property, including the square, stuccoed, two-storey Ontario cottage-style villa, passed through several hands until it was sold to Charles Heath in 1852. From this time on the property was known to Kingston residents as Heathfield. Heath sold the property in 1865 to Professor James Williamson, a brother-in-law of Sir John A. Macdonald, Canada’s first prime minister. Sir John A. rented the home for his unmarried sister Louisa and, while he was prime minister, made it his home on his frequent visits from Ottawa. With the Macdonalds’ arrival at Heathfield, a complicated family arrangement began. Louisa insisted she would live only in her brother’s “home,” so Williamson rented the whole house to John A. However, Williamson and his wife, Margaret, then lived there as Louisa’s boarders. Since John A. was the official tenant he sat at the head of the table when he dined there, with Louisa at the foot. There was an even more convoluted arrangement about gardens. Louisa bought an acre from Williamson which she used as a vegetable garden. Margaret also gardened but on her husband’s land and the value of the vegetables used from the Williamson’s garden was entered as an expense of Louisa’s household. In 1875, after ten years at Heathfield, Sir John A. suggested the family move to a boarding house within what were then the city limits of Kingston, avoiding the isolation of a house in the country. But Margaret had not been well and a move would have been difficult. After her death on April 18, 1876, the family moved into the city. Around 1879 George Sears purchased the property and is listed as its owner as late as 1895. Congregation records do not show who owned the property from this time until 1930, when the Sisters of Providence of St. Vincent de Paul purchased the land for a novitiate.

Founded in Kingston in 1861 to look after the city’s poor, orphaned and elderly, the congregation of the Sisters of Providence had grown rapidly from its humble beginnings. By 1910 their original home in the House of Providence – now known as Providence Manor – was crowded with Sisters and their charges and consequently St. Mary’s of the Lake was purchased to house an orphanage and novitiate. By 1930 the congregation had outgrown both sites and needed new quarters for their novitiate and administration. The Sisters purchased Heathfield, then a 30-acre property just outside the western limits of the city. The original villa served as novitiate until 1932, when it became a residence for the Sisters teaching in the city. In 1941 the villa became a home for needy children when the Department of National Defence took over St. Mary’s of the Lake Orphanage as a military hospital. In 1964 it was demolished to construct a new wing on the Motherhouse. An original marble fireplace from the villa still stands in the leadership team’s meeting room.

Construction of the building known as Providence Motherhouse – the term “motherhouse” refers to the official home base of a religious congregation – continued throughout the early years of the Great Depression and provided employment for many workers. Built of limestone quarried in the Kingston area, it was officially opened on July 6, 1932, and housed the novitiate and general administration of the congregation. At that time there was no sign of the beautiful landscaping now associated with the building; the “1932 wing,” as it is now called, stood in the middle of a hayfield.

Changing with the needs of the times

1954 – A 50-bed wing was added to serve as an infirmary for aged and sick Sisters. The first and third floors were occupied by retired and semi-retired Sisters. The second floor was reserved for those requiring nursing care. Built during the Marian Year, an international celebration of the Blessed Virgin Mary, this section of the building is referred to as the “Marian wing.”

1964 – In 1964 a larger addition was completed. It consisted of administration offices, enlarged novitiate, 60 extra rooms for the Marian wing, new dining, kitchen and laundry facilities and a modern heating system.

1969 – In 1969 the Chapel of the Immaculate Conception was built on the east end of the building. The former chapel became an auditorium.

1989 – Renovations were completed on the ground floor of the 1964 administration area to accommodate the congregational archives.

1991 – Renovations to the dining room area were completed. The new Electa Resource Centre moved into the north end of this area.

1993 – Extensive renovations were made to the chapel, which was renamed the Chapel of Mary, Mother of Compassion.

2000 – Extensive renovations to the Motherhouse were carried out over three years and completed in the spring of 2000. Many of these renovations accommodated the changing needs of the congregation, with a view to special needs of senior citizens. At the same time, Providence Spirituality Centre moved to an expanded site in the west end of the building.

A Heritage Room, located behind the auditorium, was opened December 13, 1999. Open to visitors, it contains more information on the history of the congregation and Heathfield, Providence Motherhouse. 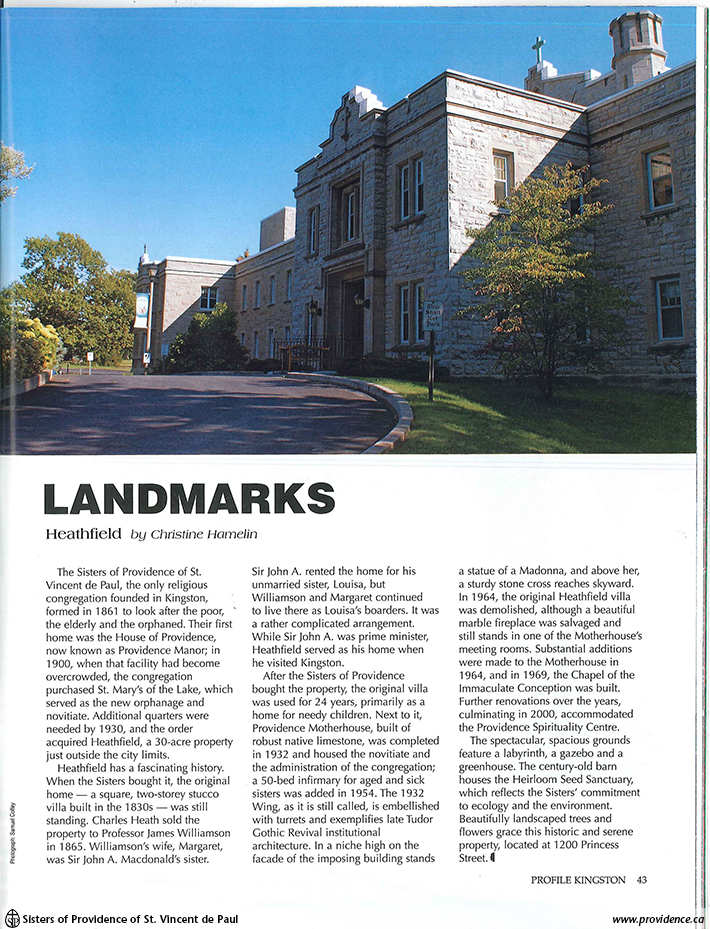