Between 1869 and the late 1930s over 100,000 “Home Children” were sent to Canada from Great Britain. As many as 50 British charitable and religious agencies arranged for orphaned, abandoned and impoverished children to be sent to Canada where they were received by distributing centres and from there placed in foster and adoptive homes and often used as domestics or farm labourers. In some cases special distributing centres were built by the sending agencies to receive Home Children. In other cases already existing institutions were approached to receive the young migrants. 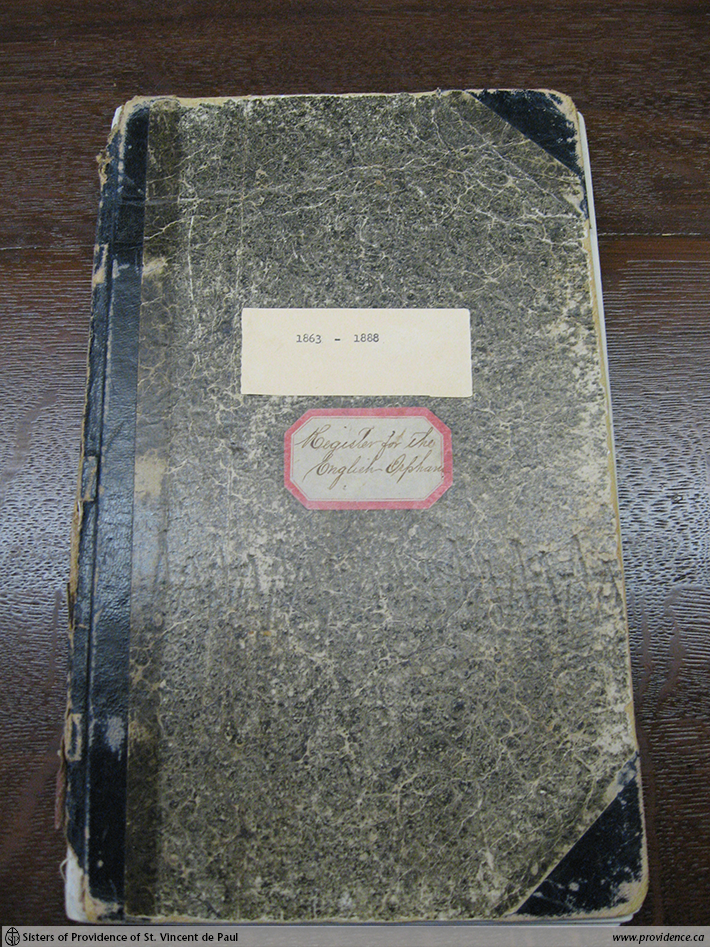 The fragile Home Children register, held by
the Archives of the Sisters of Providence of
St. Vincent de Paul.

In the summer of 1887 the Sisters of Providence were asked by the Catholic Protection Society of Liverpool, England to receive “English Orphans” and to place them in good homes in Canada. The congregation, which had been looking after local orphans since it was founded in 1861, agreed. The annals, a written chronicle of the life of the congregation, for 1887 state that “For several months negotiations had been in progress between the Community and the Catholic Protection Society of Liverpool, Eng. for the reception of Orphans sent to Canada by said Society.”

The arrival of the first group of children in May, 1888 was recorded in the annals:

On May 23rd Mrs. Lacy, Matron of the Catholic Protection Society of Liverpool England arrived bringing to us one hundred and thirty children, ranging in ages from 3 to 15 years. Many persons were already in the house prepared to adopt these poor little strangers. It was a touching sight to see these poor little creatures clinging to each other, brother fearing to be parted from sister and sisters dreading a separation from each other. In all cases where it was possible members of the same family were placed as near each other as they could be.;

The Sisters ended their contract with the Catholic Protection Society of Liverpool in 1891 because the Society had begun sending children with developmental and physical disabilities in spite of previous agreements to the contrary. The Sisters had great difficulty placing these children with adoptive or foster families. During the years the Sisters received British Home Children they also continued to run their orphanage for local orphans.From May 1888 to September 1891, the Sisters of Providence received 8 groups of English Orphans, totalling approximately 400 children aged 3 to 18 years old. They were received at the House of Providence, Kingston where their stay ranged from a few days to several months, before being placed with an adoptive or foster family. Most children were placed with families in Eastern Ontario, many in the Kingston area, while others were placed as far away as Windsor and Montreal. Most were placed once and remained with their guardians; however, in some instances children were returned to the House of Providence and were placed with new guardians.

The Archives of the Sisters of Providence of St. Vincent de Paul has an English Orphans register that lists the names of the children, their ages, their guardians in Canada and their new addresses. For more information regarding Home Children who arrived in Kingston from 1888-1891 please contact the archivist.