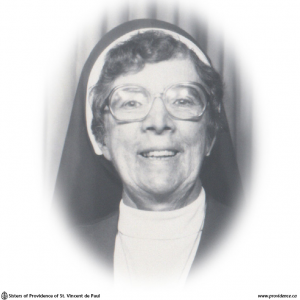 The late Sister Agnes Tapper was born in Torbay, Newfoundland on September 12, 1920. Agnes was one of eleven children born to Mary and Francis Tapper. There were six children before Agnes arrived.

As a young child, Agnes had a great love of the outdoors and the beauty of nature. She never lost her ability to enjoy all that nature has to offer.

Christ’s suffering and death motivated her, as a young woman, to reach out, to befriend and to assist the suffering who crossed her path.

While working in Montreal for the Income Tax Department, Agnes met Father Koster, a Redemptorist, who guided her in her decision to enter religious life. Then in 1944 with the support and encouragement of her family, she entered the Novitiate of the Sisters of Providence of St. Vincent de Paul in Kingston, Ontario.

Her greatest desire was to serve the downtrodden, the sick and the illiterate. She studied to become a Registered Nursing Assistant and ministered to the sick for over twenty-five years. Her nursing ministry took her to various hospitals across Canada – Montreal, Daysland, Edmonton, Kingston, Smiths Falls and Moose Jaw. Following her retirement from nursing, she ministered in pastoral care at Extendicare and at Rideaucrest Home for the Aged where both the staff and residents welcomed her warm and encouraging approach. Sister also assisted at St. John’s Parish in Kingston by visiting the sick in their homes and in the hospital.

Sister came to the Motherhouse Infirmary when ill health forced her to give up the ministry that she found so life giving. Even though she required an oxygen tank, she showed great determination by attending Mass at Rideaucrest whenever she could. She never missed an opportunity to go to Marillac Villa where she could enjoy the outdoors.

Sister Agnes was called home to her loving god at Providence Motherhouse, Kingston, Ontario, on September 12, 2002. Sister Agnes, who is predeceased by her father, Francis, her mother Mary (Martin), her brother, Robert, her sisters Ellen (Sr. Ellen Tapper CND) and Donna (Miller), will be dearly missed by her brother, Raymond of Torbay, Nfld., and her sisters, Elizabeth (Sr. Elizabeth Tapper CND) of Baddeck, Nova Scotia and Mrs. Andrew Roche of Torbay, Nfld. She will be fondly remembered by her other relatives and friends, as well as by the members of her religious congregation.

The Mass of Christian Burial, held in the Chapel of Mary Mother of Compassion, Providence Motherhouse on September 16th was presided over by Archbishop F.J. Spence accompanied by many other members of the clergy. Her friend, Father Brent Brennan, delivered the homily.