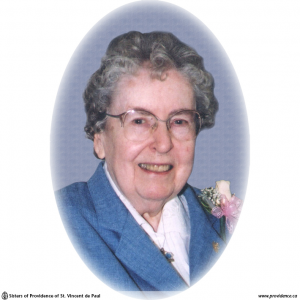 Aileen Donnelly, born on August 7, 1917 in MacLeod, Alberta, was the fourth of seven children born to Mary Coffey and Patrick Donnelly. Her father was a rancher in Alberta and her mother was a teacher from Ontario. In 1918 the family moved to Leamington, Ontario and in 1926 they moved to Brighton, Ontario and a year later they moved to Trenton. Aileen attended St. Peter’s School and Trenton High School.

On August 15, 1934 she entered the Novitiate of the Sisters of Providence of St. Vincent de Paul. After profession she studied music and obtained a Teacher’s A.R.C.T. Piano Diploma from the Royal Conservatory of Toronto. She went on to receive a Supervisor’s Certificate in School Music from the Department of Education, a Diploma from St. Michael’s Choir School in Toronto and several certificates from the Gregorian Institute of America through the University of Windsor. She spent five summers at the University of Windsor studying music and theology. She obtained certificates in Religion from the Ontario Department of Education. She also obtained a certificate in Gerontology from St. Lawrence College in Kingston.

From 1937 to 1966 she studied music and taught private piano lessons in Trenton, Prescott, Perth and Batawa and served as local Superior. From 1966 – 1981 she taught music in Prescott, Picton and Tweed. Over the years she taught school music as well as private piano lessons. She was choir director, church organist and sacristan and was involved in Parish and Diocesan Councils as well as hospital visiting. After attending the CREDO program at Gonzaga University in Spokane in 1982, she was assigned to the retreat centre in Pincher Creek. During this time she completed the Annotation 19 and later qualified as a spiritual director under Jesuit training.

In 1987 she moved to the Motherhouse to work with Sister M. Electa in setting up the museum. She also played the organ at the Motherhouse and at Providence Manor. She was often asked to play the organ in parish churches for weddings and funerals as well as at the Kingston Psychiatric Hospital on Sundays. After taking the Pastoral Care course in 1989, she ministered in Pastoral Care at Providence Manor and Kington Psychiatric Hospital. During this time she used her artistic gift to create lovely ceramic works and oil paintings.

Within the week after celebrating her 100th birthday, Sister Aileen died peacefully at the Motherhouse.

The Mass of Christian Burial, held in the Chapel of Mary, Mother of Compassion, Providence Motherhouse on August 17, was presided over by Most Rev. Brendan M. O’Brien, Archbishop of Kingston. Reverend Robert Masters was the homilist. The Rite of Committal was at St. Mary’s Cemetery, Kingston.