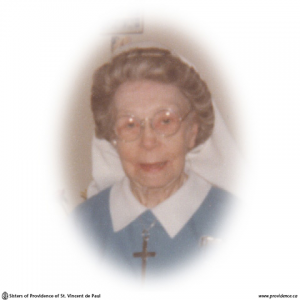 Henry Vincent was a convert. He had been raised as an Anglican, but when he married Agnes Ann Cotter, he was happy to become a Catholic for her. The faith had been in his family on his mother’s side and she had returned to it on her death bed. Henry first worked as a jeweler, specializing in goldsmithing, but for health reasons he was advised to give up that occupation and he then turned to electrical contracting. It was about that time – 1915 – that his daughter, Mary Alice, announced her intention to enter the Sisters of Charity of the House of Providence, at Kingston. Hers was one of three religious vocations among his six children. Another daughter, Hazel, was to enter the same community in 1924, and one son, Frederick, became Brother Hubert, of the Congregation of the Brothers of Christian Schools.

The Vincent family residence was in Longue Pointe, Montreal. Mary Alice Grant was born on June 3, 1896, and baptized shortly after in the Church of St. Henri. She was a favourite of her father. Her elementary school was taken at St. Agnes School and for high school she went two or three years to St. Patrick’s Academy, which was operated by the Congregation of Notre Dame. A one-year business course followed and she was able to begin working as a secretary. However, she “always knew she would be a religious and a nurse” and she confided this conviction to her mother’s relative, Fr. Louis Cotter, S.J. An Easter visit to Kingston was arranged and, shortly after her arrival back home, Mary Alice wrote asking permission to enter.

The annalist records that the reception took place at 4:30 p.m. on May 3. It was followed at 5:00 p.m. by the ceremony of the Veneration of the Relic of the Cross for the Community was marking the feast of the finding of this instrument of our salvation. The cross was never to be very far from the postulants of that day. Mary Alice, herself, was to spend long days and nights in great suffering before her death. But for the moment her young heart was happy. As soon as her novitiate was completed she enthusiastically began her training as a nurse. Sister M. Vincentia, as she was then called, took her training at St. Vincent de Paul Hospital in Brockville. After establishing an excellent academic record, she received her certificate as a registered nurse in 1923. She loved nursing and was a highly efficient worker, well thought of by doctors and staff.  Her prayer was:

“Help us, dear Lord, to work while we can, full of zeal and a sense of our responsibility to our Community, yet not allowing pressure of work to extinguish the spark of prayer and piety in us, and, when we can pray no longer, keep us in your holy service to the very end.”

Perhaps because of her observations as a nurse, she knew that a time might come for her when even prayer would be impossible and only fidelity would remain for offering.

As she was capable of further training, Sr. M. Vincentia was sent to 1930 to take a post-graduate course in pediatrics at the Hospital for Sick Children in Toronto. On the job she learned the skill of taking x-rays and in 1935 became a Registered Radiological Technician. By 1946 she was also a Registered Laboratory Technologist. However, while her career was advancing, she was paying the price of long hours of work and study. She also had to cope with the loss of four family members, including her father and mother, in this time period. Her health began to show the results of strain. Although in 1948, she was made Superior of Brockville, where she had served most of her years since Novitiate, by 1949, she had to be advised to take a year off to rest and recover her health.

Her first posting after that year was to St. Anthony’s in Moose Jaw, and then in 1951 she came to St. Mary’s of the Lake to work in the laboratory and x-ray departments.

Another period of illness began in 1956 when Sister contracted tubercular peritonitis and had to spend almost a year at Ongwanada Sanatorium in Kingston. Once she was well enough to resume her work, and, in fact, she was happiest when able to work; but her health never fully returned thereafter. In her last four years on duty she had the additional trial of watching her sister, Sister Mary Helena, undergoing a long painful final illness.

When Sister Mary Helena died in 1970, Sister Alice (She had returned to her family name in 1968.) retired and came to the Motherhouse.

In her Marian Infirmary Room Sister passed the days reading, typing and praying. Her niece, Evelyn Beck, was most solicitous for her in those years, often visiting at Heathfield and sometimes taking Sister home for holidays. On one home visit Sister Alice became very fond of a canary Evelyn had and, on her return to Heathfield, she obtained a beautiful bird from Joseph Vanderhelm, a breeder and staff member. She called it Peter and its wonderful song was as great comfort to her.

Quite suddenly on February 13, 1983, these happier years ended. A seizure led to a period of almost two weeks in hospital for tests. Released on the 26th, Sister had to be admitted again on the 27th after suffering a heavy stroke. When she returned to the infirmary on March 11, she was in good spirits, but it was clear to all that the paralysis was permanent. Gradually she became a complete bed patient, able only to utter an anguished cry when she needed nursing attention. She was to continue in this agony for almost three full years before the happy release brought by death on January 14, 1986.

She had dared to pray:

“I desire that my death may be an act of the most perfect adoration, and of the most humble submission that a poor creature can render to its well-beloved Creator. Yes, My God, may my death adore you in proclaiming Your Sovereignty. May my voluntary, free and loving resignation to it be agreeable to you. My soul bows down to accept it. I wish to die to obey you.. I wish to die, when and how it. Pleases You. In the manner you wish, under the conditions you have determined, with all the physical and mental sufferings. You have apportioned and prepared in Your foreknowledge. I ask only one grace; to die in the act of the most perfect love a creature can possess.

I offer you my death as my profession, my irrevocable consecration. May this complete abandonment of my being into your hands repair my failures If it is not too rash, I beg you to let me have my purgatory before dying. O my God, give me the grace to see You without delay at my departure from this life. Grant that my last act of love on earth may be followed by an act of love in heaven. Amen.”

It seemed to all that her prayer was heard.

During those last years, the Infirmary staff was most attentive. Particular mention must be made of the loving care given Sister Alice by Mrs. Mary Goodall, HCA. Attempts were made to meet her spiritual needs as well. Sister Mary Gerald Francis (Rayson) with voluntary generosity and sisterly love went each night without fail to say the Rosary aloud for her. In the last year or so, it was not possible to really visit with Sister, but her niece, Evelyn, continued faithfully to come and be with her.

Sister Alice’s funeral Mass was concelebrated by Archbishop F.J. Spence, Monsignor J.G. Hanley, Reverend J. Rozon, Reverend Julian Phelan, OFM Cap., Reverend W. Steacy, CSsR, and Reverend Leo Byrne. The readings of the service were particularly provocative, given all the suffering Sister had endured and the crippled physical state in which it left her:

From Lamentations – “It is good to wait in silence for the Lord to save.”

From 2nd Philippians – “He will transform these wretched bodies of ours into His glorious body.”

From the Gospel – “I have come not to do my own will, but the will of Him who sent me.”

We rejoice that Sister’s many sufferings are now over and the reward of her works it with her. Her life causes us to ponder anew the theology of the cross and of the Paschal Mystery.