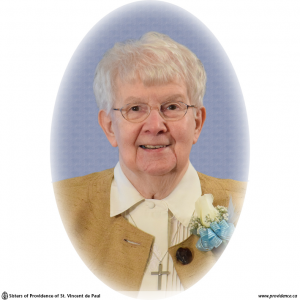 Marie Alma Sutton was born on April 2, 1926 in Chandler, Quebec to Mabel Greene and Cornelius Sutton the fifth of nine children. She grew up in and attended school in Chandler. In 1945 she obtained a position with the Canadian National Telegraphs in Montreal as a Tele-printer Operator.

Alma entered the novitiate of the Sisters of Providence of St. Vincent de Paul on February 2, 1955 and following her First Profession in 1957 she was assigned to Providence Manor to work with the elderly. The next year she obtained her Registered Nursing Assistant certificate from St. Vincent de Paul Hospital in Brockville. She returned to Providence Manor as a Nursing Assistant and then worked in Craft and Activities from 1959 – 1977. She was then assigned to the new Father Dowd Home in Montreal as Coordinator of Activities and arrived in time to help with the move into the new facility. After ministering to the elderly for a number of years, Sister submitted the following reflection to one of the Congregation’s publications: “After all those years of close contact with the elderly I firmly believe that the later years of life can be a source of hope and peace rather than a time of loneliness and fear. The elderly are great teachers. They need to give as well as receive. We must listen with a third ear – be present to them, encourage them to maintain their self-esteem or regain their self-worth. In working with the elderly I hope to learn the art of growing old gracefully, as I enjoy the welcome smiles of grateful hearts.” Sister Alma’s later years were lived out of this belief.

In 1986 Sister Alma had a sabbatical year during which she attended the Renewal Program in Arnprior. The following year she returned to the Father Dowd Home and remained there for the next ten years. She then went to St. Mary’s of the Lake Hospital to minister in Pastoral Care until her retirement in 2004. During this time she resided at the Congregation’s Intentional Community residence for six years where she was present with women discerning a call to religious life.

Sister Alma died peacefully July 27, 2017 at Providence Motherhouse in the 63rd year of her religious life. The Mass of Christian Burial, held in the Chapel of Mary, Mother of Compassion, Providence Motherhouse August 1, 2017, was presided over by Friar Edward Debono, OFM Conv. who also delivered the homily. The Rite of Committal was at St. Mary’s Cemetery, Kingston.