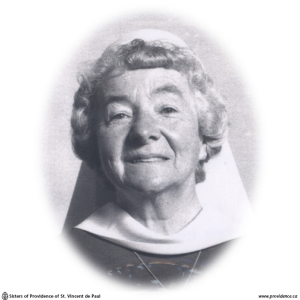 “Compassion is a profound sharing in God’s merciful and tender love for everyone He has created.” Mercy is bestowed with gentleness; tender love is given with a smile. We remember Sr. Andrea Nolan as having the compassion she described in this quotation. It is taken from an account which she wrote on the Charism and Spirit of the Sisters of Providence of St. Vincent de Paul.

Sister seems to have come by her gentleness quite naturally, for the same trait can be seen in other members of her family. Born September 9, 1912, she was the sixth of the fourteen children raised by Edward Nolan and Anita (Netti) Plue on their farm at Actinolite, Ontario. She was christened Mary Ellen at her baptism in the church of the Sacred Heart in Madoc, Ontario, but her kin called her “Eileen”. It was a family not rich, but never wanting. Everyone did their share of the chores to keep expenses down and the children, making their own fun together, really enjoyed their youth.

Having completed her elementary education in the Madoc area, Eileen went to high school in Tweed. It is not clear whether she completed all of her Gr. XII year at that time, for by 1930 she was out working and on an information form she has listed her certificate as earned in 1934.

In any case, the story is that Eileen went off one day, at her usual time, to get the bus to work; but, instead, she returned home and announced that she was going to enter the convent. Prior to that sudden statement the family knew nothing of her intentions to become a religious Sister. Reverend J. V. Meagher, parish priest in Madoc, and Sister M. Evangelist (Byrne), Superior at St. Carthagh’s Convent in Tweed, were her confidants. The former saw her as “a young woman of great piety and admirable character”. The latter, had obviously made a good impression on her and continued to support and encourage her through the formative time of Novitiate. Apparently she needed these relationships to spur her on, for in a letter of February 23, 1932, she asked to be allowed to enter on the Feast of St. Joseph, March 19, at Father Meagher’s suggestion, but then delayed until July 4, when the annalist records, “A few words of encouragement induced her to make no further delay.”

This July, 1932, entrance date meant that Eileen was ushered into a very busy house. The opening of the new Novitiate at Heathfield was only two days away. Visiting clergy and Sisters were arriving to stay overnight. Plans called for four Masses between six and ten o’clock in the morning of July 6 before the Pontifical Mass and Blessing. Following the ceremony would be a dinner for the clergy and Sisters, an afternoon reception for other guests and a closing Benediction. Imagine the organization and the work as everything reached the final stages of preparation! She must have enjoyed being helpful though, for, as we shall see, the kept at it until her final illness.

On August 15, 1934, Eileen, now Sr. M. Andrea, pronounced her first vows. Then it was off to Normal School and at its close she spent the month of June, 1935, helping Sr. M. Bernarda (McNamara) mark year-end papers at St. Mary’s School in Chesterville. Her first assignment was to this school as the primary teacher.

This was the beginning of a career in education that spanned thirty-eight years and took her to Smiths Falls, Kingston, Arnprior, Trenton, Belleville, Prescott and King, as well as a short return stay in Chesterville. As was, and is the custom with our teaching Sisters, she had duties outside the classroom as well. For many years she served a parish sacristan and was most meticulous in this charge. Like the other teaching Sisters, too, she took summer courses “too numerous to mention”, taught summer catechism classes in the country and kept up-grading her teaching qualifications. Except for the years 1964-1966 when she was Religious Education Coordinator for the four schools of the Hastings Prince Edward RCSSB in Belleville, her reaching assignments were at the primary level. There her gentleness and constant good humour were a big asset. She is remembered as “a very excellent teacher, methodical, thorough in preparing the little ones for the sacraments”. The high esteem in which she was held by her fellow teachers was attested to by her election as president of District 4 of the Ontario English Catholic Teachers’ Association.

Within community, Sisters who lived with Sr. Andrea often became her lifelong friends. They testify that she was faithful to all her duties…and had a penchant for the fun side of life. She was not a complainer, even in times of illness and suffering.

When she retired from teaching at the close of the school year in 1973, Sister immediately launched a second career – that of pastoral care worker. At the Dowd Home in Montreal, Providence Manor, Kingston, and the McFarland Home and St. Gregory’s parish in Picton, the same qualities that made her loved by the little ones in school endeared her to the sick and elderly. One elderly gentleman gave her the name, “The Lady from God”. As Father T. Boyle, pastor of Picton, stated in the homily he gave at her funeral, “She was a special person, beautiful in natural and spiritual endowments.” In Picton she took advantage of an opportunity to combine teaching and pastoral care as she imparted some religious knowledge to the developmentally handicapped residents of Prince Edward Heights complex. In all this she put into practice another statement from the account referred to in the opening paragraph of this necrology: “Compassion is suffering with another in all his sorrows, anxieties and troubles with a desire to alleviate and help.”

Sr. Andrea took a sabbatical in 1982-1983, following the Credo program at Gonzaga University in Spokane. She traveled to the Holy Land as part of that course. Refreshed and renewed by this year away, she came to Kingston in September, 1983, to serve part-time as a receptionist at the Motherhouse and part-time in pastoral care at St. Mary’s of the Lake Hospital. Although now 71 years of age, she was most willing to continue in active apostolates as long as she could. Unfortunately, beginning early in 1984 she was beset by a series of health problems. First, in February, she slipped on ice at the front door of the Motherhouse and broke her ankle. Clumping around on a noisy cast, she took considerable teasing with her accustomed ease. Surgery in July was more serious and she had not really recovered from this when, in September, further surgery was necessary. Although she tried to resume working, it was obvious that her strength was not returning. In April of 1985, she had to accept the diagnosis of cancer and by July she was advised that she had but a month to live. Even in those last weeks, she was known to joke gently with those she met in the hall or those who called at her beside.

During her last days, members of her family visited Sister frequently in the Marian Infirmary and, toward the end, Sisters sat with her throughout the day and night. Sr. Verna Plue and Sr. M. Coletta (Quinn) were present when she died on August 16 at 4:05 p.m. The Lord had come quickly, but she was ready.

A Sister from another community who studied with Sr. Andrea at Spokane, on being informed of her death, wrote, “The brevity of her illness was surely a sign of her readiness to enter the Kingdom of God…I often reflected on the times I saw her pray in the little oratory in Marian Hall and of the peace that always seemed to emanate from her. She was a person in full possession of herself and it was an inspiration to have had the privilege of knowing her for the year.”

In the spiritual notes which Sister kept are simple prayers, straightforward, basic ones with no novel ideas, but rather those that have stood the test of time. She would never consider herself a theologian, yet in her article on the Charism and Spirit of the Institute is this profound statement: “The Providence of God has woven itself into our compassion.  We are made to need and care for one another.” That very deep theology guided her life. No wonder we remember her with love.