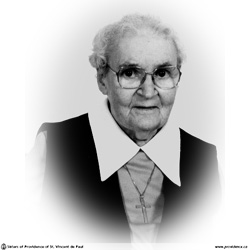 The late Sister Ann Durkin was born Anna (Ann) Lavina Durkin on June 16, 1909 on a farm in Stoco, near Tweed, Ontario. She was one of seven children to bless the home of Edward and Alice (Kehoe). Ann wanted to enter religious life in 1932 but was needed at home because her father was ill. After her father died, Ann entered in 1936 at the age of 27. In his letter of recommendation the parish priest stated he had offered to buy what she needed because the family, like many others in the thirties, was having a hard time to make ends meet. However, Ann said she wanted to buy her own outfit. Ann said she also had two other conditions regarding her decision to enter. She wanted to be a teacher, and she did not want her plans to be shared until she actually stepped inside the convent. He said he could not help admiring her spirit of independence.

At her profession Ann took the name Sister Mary Callista. She then went to Glen Nevis and studied at Maryvale Abbey. At the glen, Sister came to admire her mentor, Sister Mary Electa, who taught her English and Latin during the day, but who after four o’clock became as carefree as her students. Once, she was delighted to overhear Sister Mary Electa tell someone, “You could depend your life on Sister Mary Callista.” Monsignor McDonald, or Father Dan, as he was affectionately called by most people, was also greatly adired by Sister. It was he who was overjoyed to receive the vows of a Sister of Providence of St. Vincent de Paul (Sister Mary Callista). Permission was granted from the Motherhouse to have this ceremony take place in the Glen. When she asked Sister Mary Elizabeth, an old timer at the Glen, if it would be a high Mass, Sister Elizabeth replied, “It will be as high as Father Dan can make it!”

Sister Ann went on to become qualified as a teacher. From 1940 to 1966 she taught young children in Ontario and in Montreal. Her former pupils remember her as being patient and never cross. She was kind and capable and she made school enjoyable for her students. Sister Ann suffered from mild depression all her life but somehow in spite of it all, always managed to keep a wonderful sense of humour. Her big brown eyes never missed a thing and they twinkled as she told stories about her life on the farm, in the classroom and later in the Infirmary. After retirement, she generously helped out at the reception desk, guest dining room, laundry and wherever else she was needed. As long as she was able she loved to return to visit relatives in the countryside near Read.

Sister liked to read, especially mystery stories. She liked to play cards and to listen to music. She also loved the rosary. There was a hidden spiritual depth to Sister Ann that those who knew her well admired. After her stroke she was unable to speak but she suffered patiently and she communicated a great deal through those wonderful, large brown eyes. Near the end, even more than all through her life, Ann’s own weakness let the strength of Jesus shine through her. She returned to her God on November 26, 2001. Besides her parents, Sister Ann is predeceased by her sisters, Cecelia, Genevieve and Mary, and by her brothers, William, Owen and Michael.

The Mass of Christian Burial, held in the Chapel of Mary Mother of Compassion, Providence Motherhouse was presided over by Archbishop F. J. Spence accompanied by several other members of the local clergy. In attendance were several of Sister’s nieces, nephews and other relatives, as well as friends and members of her religious congregation. In his homily Monsignor T. Raby, quoting “My portion is the Lord, and I trust in God.” (Lamentations 3:24), remarked how Sister Ann lived these words. She did not expect Jesus to remove her sufferings but trusted Him, who invited her to come to Him when weary (Matthew 11), to support her in it. Without realizing it, she became a beacon of hope and encouragement for others who suffer long and silently through the years. Like her, others can find the strength of God’s love that works through human weakness.