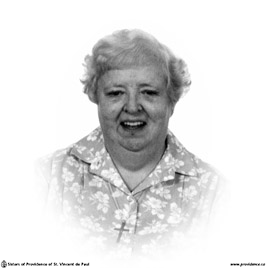 Mary Anne Sullivan was born in Arnprior on February 3, 1922, one of 5 children of John Sullivan and Mabel Dorion. By the time she was six years old Anne had lost both parents. Her maternal grandmother and her uncle devoted themselves to bringing up the five Sullivan children in a loving home that bonded them for life. She received her early education at St. John Chrysostom School in Arnprior where she came to know the sisters of Providence. She entered the Novitiate on September 15, 1939 and during this time she received singing lessons from Sisters Mary Hildegarde and Genevieve.

Her first assignment after making profession in March 19, 1942 was sacristan at the Motherhouse. From 1943 to 1954 she ministered as cook and housekeeper in Prescott, at Providence Manor in Kingston, in Chesterville where she also taught singing from grades 1-5, at the orphanage at Heathfield, St. Joseph’s Hospital in Edmonton where she was in charge of the kitchen for over 300 people and finally in Newmarket. In 1955 Sister Anne was assigned to the Altar Bread Department at the Motherhouse, where she diligently devoted herself to making hosts for all the parishes in the Archdiocese of Kingston and beyond. No matter where Sister Anne was, her radiant personality left an indelible imprint on the lives of those about her. She befriended many a novice during her years in the Altar Bread Department. During these years Sister Anne also became involved with prison ministry where she found great satisfaction in affirming needy inmates who delighted in her visits.

In 1981 Sister Anne went to the Father Dowd Memorial Home in Montreal for a short period but returned to the Motherhouse because of illness. She was able, though, to look after the breakfast room and the oratory. During this time she also ministered as a reader for the liturgical celebrations and participated in the choir until ill health confined her to the infirmary.

Sister Anne was called home to her loving God on June 4, 2006. The Mass of Christian Burial, held in the Chapel of Mary Mother of Compassion, Providence Motherhouse on June 7, was presided over by Most Reverend Francis J. Spence, assisted by several members of the clergy. Rev. Msgr. Donald Clement delivered the homily.