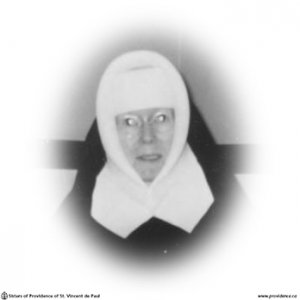 Anna Catherine Way was born April 3, 1893 on a farm in the parish of Erinsville, Ontario, one of seven children of Patrick Way and Margaret Murphy Way. When at the age of twenty-one she applied for admission to the Novitiate of the Sisters of Providence, her pastor, Father Thomas Carey, in his letter of recommendation to Our Mother General wrote of her as “an excellent young lady who comes of a splendid family, both father and mother.” And the Providence Community could write of her after her sixty-one years of membership, “She was an excellent religious, loyal, devoted, and prayerful.”

In 1916 she made profession as Sister Mary Theodora and was assigned to the newly-opened mission of St. Carthagh’s Convent in Tweed. When in 1968 Sisters who wished were permitted to revert to their family names, Sister became again Anna Catherine Way. At St. Carthagh’s she was looking after household duties, when she suffered a serious illness and was never afterwards in robust health. But she was skilled in needlework and gave valuable service in the sewing room of various houses, especially in St. Vincent de Paul Hospital, Brockville, where she was stationed for almost twenty years. For one term she was Local Superior on a teaching mission at Newmarket, Ontario.

In 1968 she retired to the Infirmary at the Mother House, and her physical strength gradually declined until she was confined to a wheel-chair. On August 12, 1975 she fell, fracturing a hip. She was taken to Hotel Dieu for treatment, but her frail condition could not withstand the shock and the surgery and she lived only four days.

On the morning of the 16th a message came from the hospital that she was sinking and Our Mother General, Sister Margaret Rose (Superior of the Infirmary) and Sister Sheila Way (Sister Anna’s niece) went in. Sister Sheila remained for the day and was joined in the afternoon by Sister Alma Sutton. Both Sisters were with her to pray and watch as her holy soul returned to God at 4 p.m.

Her funeral Mass was concelebrated by His Grace, Archbishop Wilhelm, and her two nephews, Father Walter Healey and Father E.J. Way, in the presence of a large number of relatives. Four nephews acted as active pall bearers and the honorary pall bearers were Sisters Sheila Way, Joan of Arc, M. Carthagh and Margaret Meraw – all three natives of Tweed whom Sister Anna Catherine had helped to prepare for their entrances to the novitiate when she was stationed at St. Carthagh’s Convent.

Sister Anna Catherine will be remembered for her quiet, kindly manner and her beautiful example of an exemplary religious life.